Award-winning reporter Ashton Pittman, a native of the South Mississippi Pine Belt, studied journalism and political science at the University of Southern Mississippi. Previously the state reporter at the Jackson Free Press, he drove national headlines and conversations with award-winning reporting about segregation academies. He has won numerous awards, including Outstanding New Journalist in the South, for his work covering immigration raids, abortion battles and even former Gov. Phil Bryant’s unusual work with “The Bad Boys of Brexit.” A trained photojournalist, Ashton lives in South Mississippi with his husband, William, and their two pit bulls, Dorothy and Dru. Follow on Twitter @ashtonpittman. Send tips to ashton@mississippifreepress.com. 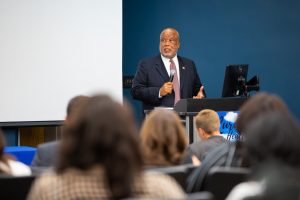 ‘America is Crying Out’: Will Federal COVID-19 ‘Bailout’ Help Mississippians with Fallout?

U.S. House Rep. Bennie Thompson, a Mississippi Democrat, hopes Congress will pass “a bailout for everyday Americans instead of corporations” when Republicans and Democrats finally agree on an economic-stimulus compromise bill, his office told the Mississippi Free Press Tuesday evening.

As the number of confirmed cases continues to rise, mayors and local leaders are left to implement a patchwork of measures to try to combat the coronavirus’ spread throughout their own communities, some more strict than others.

For the first time, a Mississippi patient who tested positive for COVID-19, the novel coronavirus, has died. The Mississippi State Department of Health today announced the death of a Hancock County man between the ages of 60 and 65 who had “chronic underlying conditions.”

The University of Mississippi Medical Center in Jackson is taking significant steps to combat the possible “tidal wave” of the novel coronavirus, COVID-19, throughout the

Mayors from Oxford to New Orleans Watching ‘Model of What’s to Come’ A new walk-in clinic in Hattiesburg, Miss., will focus solely on diagnosing and

​After Hurricane Katrina battered the Gulf Coast in 2005, then-Mississippi NAACP President Derrick Johnson saw first-hand what happens “when government is not operating in a