Mississippi hospitals are “stretched thin,” and Mississippians “will not be able to get the health care (they) need” as the novel coronavirus outbreak accelerates across the state, top health experts warned during a dire press conference this morning. Already, State Health Officer Dr. Thomas Dobbs said, five of the state’s largest hospitals have already run out of ICU beds for critical patients.

“At the (University of Mississippi) Medical Center, we are full. Many days, we have more patients than we have rooms,” UMMC Vice Chancellor LouAnn Woodward said as she stood in front of a podium with a poster and the hashtag, “#MaskUpMississippi” covering the front of it.

Woodward: ‘We Are Begging’ Mississippians to Help Slow Spread

At the height of the pandemic crisis in New York City in April, patients died in waiting rooms, morgues overflowed, and workers packed bodies into cooler trucks or buried them in a makeshift cemetery in Central Park. With hospitals overrun, health-care workers had to use makeshift health centers to see patients. Many of New York City’s health-care workers fell ill or died from the virus, making the health-care response even more difficult.

“We are speaking for the health-care workforce of the state of Mississippi. We are begging, and we are asking for the people of Mississippi to get on board with us,” said Dr. Woodward, who noted that Mississippi “went from shelter-in-place to wide open, whether official or not official.”

With COVID-19 patients filling up emergency rooms, it will only grow more difficult for health care workers to see other emergency patients, she warned.

In late June, Dr. Dobbs told Jackson Free Press reporter Nick Judin that Mississippians should “prepare for not being able to get into the hospital if you have a wreck, (to) have a heart attack and there not be a ventilator to put you on.”

When Dr. Dobbs gave that interview on June 23, though, he was describing what he expected the fall to look like. Days later, he told Anita Lee at the Sun Herald that the system could break down within weeks. Just a few weeks later, though, that time is already here in some parts of Mississippi.

The virus’ spread had begun to slow in Mississippi during May, as Gov. Tate Reeves began to reopen some businesses. By the second half of June, as the governor began a broad reopening of state businesses, Mississippi averaged just 11 novel coronavirus deaths per day, down from an average of 15 per day in May. In July so far, the state has averaged 15 deaths per day. Deaths rose sharply in the past two days, though, with MSDH confirming a record 34 new deaths on Tuesday and another 30 on Wednesday.

Cases have also risen at record rates, with health officials announcing 705 additional cases per day on average since July 1. In June, the state averaged about 390 cases per day.

Cases rose more quickly in some places than others, though. In Forrest County, where Hattiesburg Mayor Toby Barker implemented a still-in-effect mask mandate more than two months ago, COVID-19 cases rose about 1.1% per day on average in the second half of June. In Marion and Lamar, two neighboring counties directly to the west with no local mask mandates, though, cases rose respectively 3.5% and 2.7% per day on average during the same timeframe.

Other Mississippi cities now require masks, too, including Tupelo, Oxford, Canton, Laurel and Jackson. Greenwood joined the ranks of cities with mask requirements on Tuesday.

Woodward: ‘I Support a Mask Mandate’ if ‘That’s What It Takes’

A number of Mississippi leaders have called on Gov. Reeves to issue a statewide mask mandate to help slow the spread.

“Mississippi is in danger of overwhelming its health care system with cases of COVID-19. We must do everything in our power to try to prevent that from happening,” Mississippi House Rep. Jeramey Anderson, a Moss Point Democrat, said in a letter to Reeves today. “Every day we wait to act will make preventing our health care systems from being overwhelmed that much harder or impossible.”

Yesterday, Reeves told members of the press that he was considering a mask requirement. He has faced political pressure from some who claim a mask mandate would violate their freedoms. But health experts point out that masks work best when everyone is wearing them, and even mask wearers are endangered when they are in an environment with other people who are not wearing masks.

MSDH confirmed yesterday that dozens of lawmakers, including House Speaker Philip Gunn and Senate President Delbert Hosemann, have tested positive for the novel coronavirus, along with 10 others who were present during legislative meetings in recent weeks where lawmakers often failed to wear masks.

During today’s press conference, Dr. Woodward said she did not like the idea of a mask mandate, but would support one if that is what it takes to get Mississippians to wear masks.

“Do I want us to have to have mandates to wear masks? Of course not,” she said. “Just like every other person in Mississippi, and probably the country, you … want to make your own decisions. So I believe everybody should wear a mask. However, if that is what it takes for the people of this state to realize we are serious and this is a major safety issue, then I support a mandate.”

In his letter, Rep. Anderson urged the governor “have an all-out public relations blitz against the false narrative that requiring masks endangers some people’s health or that they infringe on their freedom.”

“Numerous doctors and health professionals have said masks do not significantly inhibit breathing and pose no further risk to those who suffer from asthma or other respiratory problems,” the Moss Point lawmaker wrote. “We cannot let people who say otherwise, while providing no scientific evidence, dominate the conversation. A mask mandate endangers freedoms no more than the requirement to wear seatbelts, which has saved countless lives. I promise to fully support you in such an effort. … Please require that masks be worn and double down on social distancing.”

Dobbs: Mississippi ‘Sacrificed A Lot’ and ‘Gave It All Back’

At today’s UMMC press conference, health experts also discussed the possibility of schools reopening statewide in the next few weeks. Gov. Reeves has vowed to reopen schools in a “safe way.” But Dr. Anita Henderson, a Hattiesburg pediatrician, said today that schools have only a month or less to prepare for “safe” reopenings, and that there is no way to guarantee that public schools will not experience major outbreaks among students and faculty.

“Part of it’s getting back to school, and part of it is staying in school. You’re not going to have school if there’s outbreaks,” Dr. Dobbs said.

“We sacrificed a lot in those three weeks, and we’ve given it all back—and then some,” the state health officer said, referring to the statewide lockdown that Reeves issued in April before lifting restrictions in May and June.

As the Gulf Coast enters hurricane season, the health experts warned today, Mississippi’s health-care system could teeter over the edge if a major hurricane struck.

“Our people are tired. Our resources are stretched thin,” Dr. Alan Jones said at one point.

There simply would not be enough workers or resources available to deal with a natural disaster on top of the current pandemic if current COVID-19 trends hold up, the experts said.

“It’s going to be a New York situation, and we’re going to be in a parking lot trying to take care of people, and we can’t do it. And if a hurricane hits, I’m quitting,” said Dr. Alan Jones, a UMMC professor.

Some present laughed at the grim assessment. Dr. Woodward smiled.

“No quitting,” she said. 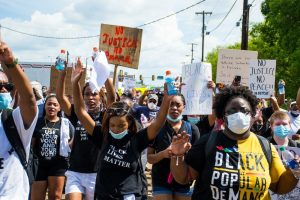 Support the MFP
PrevPreviousChanging What I Cannot Accept: My Story of Understanding Mississippi Racism
NextThe Past Isn’t Dead: UM’s Winding Road to a Fight Over a Statue and a CemeteryNext