‘Crisis Levels’ in Mississippi: No ICU Beds Left in Jackson, Only 12% Remain Statewide

With COVID-19 cases ramping up, Mississippi’s capital city has run out of ICU beds.

There is still no statewide mask mandate; Gov. Tate Reeves allowed it to expire on Sept. 30 after the state successfully beat back the summer wave—a decision Dobbs had shown discomfort with at the time.

Jackson is not the only large Mississippi city with no or few ICU beds available. Five remain in the state’s second largest city, Gulfport, and none in neighboring Biloxi. There are zero ICU beds available in Southaven and just one in nearby Olive Branch, both located in DeSoto County, where the sheriff is refusing to enforce mask and social distancing orders.

In Hattiesburg, located in Forrest and Lamar counties, only one ICU bed remains. Greenville in Washington County is down to just one ICU bed.

“I know that we are all tired and ready to move on. But the virus is still here,” the governor said in a statement yesterday, one day after he announced that his youngest daughter had tested positive for COVID-19; the rest of the family tested negative yesterday.

Reeves added five new counties to the list that were not previously under mask mandates, including Covington, Humphreys, Lauderdale, Rankin and Yalobusha counties.

Today and yesterday, Mississippi reported 17 more deaths—deaths “which we should remember are avoidable,” Dobbs wrote in a tweet yesterday.

The number of Mississippians hospitalized for COVID-19 also rose to 669—the highest it’s been since the summer surge, when hospitals across the state were overwhelmed with patients. Fewer than 1,500 staffed hospital beds remain available, or about 20% of the total statewide.

“It’s still working to infect and kill. We’ve gotten far better at dealing with it, and allowing for life to go on. But we’re not all the way there yet,” Gov. Reeves said in yesterday’s statement. “Keep fighting and protecting the most vulnerable in your life. No matter where you are, please do your best to social distance and wear a mask.”

The governor’s order yesterday means that the mask mandates he put in place for nine counties last month will continue until at least Dec. 11. Those counties are: Benton, Carroll, DeSoto, Forrest, Harrison, Jackson, Lamar, Leflore, Lee and Marshall. Those orders had been set to expire today.

As the surge ramped up in early July, the governor enacted a patchwork system of mask orders for the hardest-hit counties, but by July’s end, it included almost half the counties in the state. On Aug. 4, Reeves moved on from the patchwork system and issued a statewide mask mandate, declaring, “I want to see college football.”

Cases fell dramatically over the ensuing weeks even as schools reopened, albeit with mask requirements for students.

After two months of sustained improvement, though, the governor allowed the statewide mask mandate to expire on Sept. 30, saying “we need to trust the people of this country to look after themselves and make wise decisions” instead of the government.

All across the state, though, many Mississippians abandoned mask-wearing in public, and cases, hospitalizations and deaths quickly spiked and have risen since. The governor reacted by reinstating mandates, initially in just nine counties, in mid-October.

The governor’s current patchwork mask orders apply to counties that have reported at least 200 cases over a two-week period or 500 cases per 100,000 residents over the same period.

On Monday, the Mississippi State Department of Health reported the second reported death of a child from COVID-19 complications since the pandemic began. The child has not been identified and is only listed as between the 6 and 10 years of age. The state reported the first child death in September of an otherwise “healthy child between the ages of 1 and 5 years old.”

Both children died with the coronavirus-linked MIS-C, or multisystem inflammatory syndrome, which the U.S. Centers for Disease Control defines as “a rare but severe condition that has been reported approximately 2-4 weeks after the onset of COVID-19 in children and adolescents.”

The Mississippi State Department of Health reported a new weekly high for cases in schools this week, with about 900 students, teachers and faculty testing positive last week. Schools also statewide ordered more than 10,000 others to quarantine at home for two weeks due to exposure to the virus.

Yesterday, the Mississippi State Department of Health used social media to sound a note of urgency.

“Hospitalizations for COVID-19 are on track toward the crisis level we saw this summer. If we don’t make changes immediately, we’ll see critical shortages of first-line care for the seriously ill and injured,” MSDH said. “We know what works: social distancing, small gatherings and masks.”

Dr. Douglas Chambers, a University of Southern Mississippi historian who has studied past pandemics and closely followed COVID-19 data since March in a scholarly fashion, told the Mississippi Free Press in mid-October that the data suggested the state was already entering another COVID-19 wave.

Indeed, the 7-day average for new COVID-19 cases in Mississippi has doubled from about 500 on the day Gov. Reeves ended the mask mandate on Sept. 30 to more than 1,000 now.

“I am sorry that Covid has hit the governor’s family, and am praying for his daughter’s recovery,” Chambers told this publication yesterday. “Truly, no one is safe from this pandemic. The best we can do is mask up.” 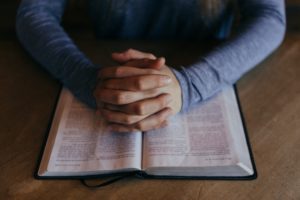 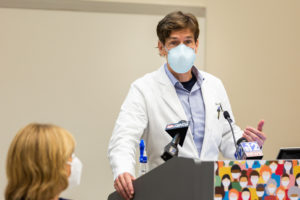 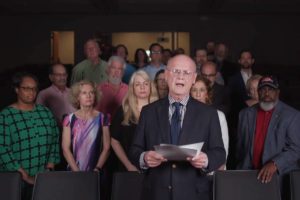