Mississippi Gov. Tate Reeves lashed out today at “so-called experts” in the medical field as he continued to defy their pleas for him to reissue a statewide mask mandate. The governor’s outburst came during a press conference in Jackson hours after four of the state’s top health-care professionals urged him to issue the order, saying it is “vital to maintain the integrity of our health-care system.”

“The COVID-19 crisis continues to plague our state. Sadly, Mississippi’s healthcare system is again overwhelmed by COVID-19, just as it was this summer. The data shows that the statewide mask mandate you instituted on August 4 worked well, and we are asking you to institute it again,” the letter reads.

Instead, Reeves instead used today’s press conference to double down on the same strategy he has followed since mid-October, by implementing more county-level mask mandates in the hardest-hit areas. Today, the governor added 19 more counties to the list, bringing the total number with those orders to 41—half of all counties in the state.

“The upcoming winter is going to be difficult for Mississippians. We know that wearing masks will help us continuously to grow our economy, allow kids to remain in school, parents to go to work, and most importantly, protect all Mississippians from this deadly virus. Physicians across Mississippi ask that you reinstitute a statewide mask mandate,” the medical professionals wrote.

“There’s no doubt I’ve been getting a lot of advice from the public domain from a lot of different people on what we as a state should do and what should work. … There are some that believe, and I believe they are completely wrong, that believe that the way in which to do that is for a statewide elected official to simply write on a piece of paper, ‘Statewide Mask Mandate,’ and all is good. The problem is, Bobby, that the data does not support that,” Reeves said.

He pointed to other states that have statewide masks mandates yet have nevertheless seen rising case totals, including Alabama, Louisiana, Arkansas, Kansas, Kentucky and Tennessee. Overall, though, the data show that states with mask mandates have fared significantly better than those without them.

Reeves admitted to Harrison that he does not for sure know that he is getting it right in Mississippi or that other states are getting it wrong because “we are all making decisions based upon an ever-changing environment.”

“But I get frustrated when so-called experts decide that if we just did one more thing, that we could change this,” the governor said, swiping at the public-health leaders who called for a mask mandate. “The fact is as follows: There is no silver bullet. There is no one thing we can do as a state. There is no one thing I as a leader or that we as Mississippians can do to make this go away.”

None of Mississippi’s health-care experts have suggested that a mask mandate would act as a “silver bullet,” though, nor that it would make the virus go away. Dr. Woodward admitted as much during a press conference at UMMC yesterday, in which she highlighted the fact that health-care workers are exhausted as the hospital’s emergency room operates at capacity.

“Even with a statewide mask mandate, not 100% of people will comply. But we do have reasonable evidence to believe the county-by-county approach is not working. It’s maybe helping, but it’s certainly not doing what we need it to do,” Woodward said yesterday.

‘Our Hospitals Are at Capacity, and Our ICUs Are Full’

The order applies to counties that have met a certain threshold in terms of caseload over a two-week period. The governor left mask mandates intact in all 22 counties that already had them in effect, saying that while four counties have since technically fallen below the threshold, they “fell under it by a relatively small margin.” The only one of those four he mentioned by name was Lamar County.

Woodward said during yesterday’s UMMC press conference that the county-level mandates were not doing enough to “turn these numbers around” to prevent hospitals from being overwhelmed with COVID-19 patients.

“And the other reason is with the governor being the highest level of state official in the state of Mississippi, I think that sends a big signal for that position to say, ‘We are at a critical point, people—we need to have a statewide mask mandate.’ … What we have been doing hasn’t turned this around,” Woodward said.

In their letter today, the four doctors pointed out that drastic fall in COVID-19 cases that came on the heels of Reeves’ summer mask mandate.

“For the first time since August, we have 1,000 suspected or confirmed COVID-19 patients in Mississippi hospitals. Our hospitals are at capacity, and our ICUs are full. Physicians are actively transferring patients out of Mississippi for care,” the health experts said, predicting that “hospitalizations will continue to rise throughout the holiday season.”

‘We Are in the Middle of Our Second Surge’

When the governor first instituted the mask mandate on Aug. 4, Mississippi was reporting an average of about 1,100 new cases per day over a seven-day figure. That figure had dropped to just 500 new cases by Sept. 30—the day Reeves let the mandate expire. Today, though, the seven-day average is nearing 1,300 daily cases.

“Mississippi has been able to avoid the national surge in cases for a while. We had seen seven or eight weeks of slow but steady, but small increases in overall cases. However, now, it’s clear that we are in the middle of our second surge,” Gov. Reeves said at today’s press conference.

Others identified a rising new wave of novel coronavirus infections more than a month ago.

“We are on the horizon of the second wave. I would say we are already clearly now in the second wave, and it is the responsibility of white people to get their act together,” Dr. Douglas Chambers, a University of Southern Mississippi historian who has studied past pandemics and who daily examines COVID-19 data, told the Mississippi Free Press on Oct. 15.

He was referring to the fact that white Mississippians had by then become the primary drivers of new COVID-19 infections and deaths in the state—a stark reversal from the early days of the pandemic when Mississippians of color faced disproportionate impacts.

In DeSoto County, where the white percentage of the population is greater than in the state as a whole, a number of leaders have refused to back the governor’s mask mandate for that county, including the sheriff and three Mississippi House representatives. Even as the sheriff there refuses to enforce the governor’s mask order, all three hospitals in the county report zero ICU beds remain available.

“We have some leaders in some communities who for whatever reason don’t think masks work. I think the data is very clear that our approach can and will lead to the best outcome,” Gov. Reeves said today, insisting that the county-level mask order approach is best despite the compliance struggles.

‘We All Want Somebody to Blame’

Throughout his press conference, the governor repeatedly questioned the motives of those pushing him to implement a statewide mask order. He would consider one, he said, if as during the summer, the state reached a point where “community spread was so large that we were going to be adding mask mandates to well over half of our counties.”

But Mississippi is not there, yet, Reeves said today, even as the list of counties with mask mandates almost doubled to include exactly half of the 82 in the state.

Talk of mask mandates is not new though. Dr. LouAnn Woodward first called on Reeves to issue one in July—weeks before he finally issued the first one in August.

“And the fact is that none of those words taken by themselves is a panacea. None of them is a silver bullet,” Reeves said today, repeating two buzzwords (“panacea” and “silver bullet”) he has often used when asked about mask mandates in recent weeks and months.

The governor hypothesized that people used those “buzzwords” because “we all want somebody to blame” for the virus’ impact.

“And by the way, I have issued a statewide mask mandate when I believed it was in the best interests of our citizens to do so. I’m not scared to do so again,” he said.

‘I Wouldn’t Say That I Have Learned A Lot’

“If you aren’t listening to the public-health experts urging a mask mandate, who are the experts that you are listening to?” Judin asked the governor.

The governor did not name any experts, citing only himself.

“Nick, I appreciate your questions and I appreciate your advocacy for your positions, but here’s what I believe. I’m going to make decisions that I believe will provide the best outcome for Mississippians. In counties where mask mandates are in place, we’re seeing significantly better participation by our citizens,” the governor said, despite examples of counties like DeSoto where that is not the case.

When another reporter asked Reeves what he had learned after his daughter, Madeline Tate, tested positive for COVID-19, he had little to offer.

“I wouldn’t say that I learned a lot. I took the virus very seriously before she tested positive,” he said. 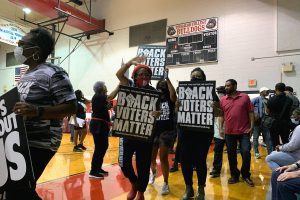 Support the MFP
PrevPreviousMultiracial Anti-Lynching Activists Formed the NAACP in 1909, But It Wasn’t Black-Led Until 1920
NextGleaning, Saving Expired Food from Homes and Farms Can Feed Mississippi’s HungryNext