The mother of four rushed home Friday when she heard the news. When she arrived, officers were still traveling door to door at Catherine Street Apartments in Starkville, flanking a representative from her new rental company. They were informing the residents that the mass-eviction process that started only weeks before was resolving, and resolving quickly.

What happened next is disputed. Were residents given three hours, or three days? Young is adamant that she heard three hours. “They said, ‘you have three hours to get out,’” she told the Mississippi Free Press in an Aug. 28 interview. “I was on the phone with my boyfriend, and I heard her say it. She was close enough for me to hear her. (Then) she said to get all our stuff packed up and leave.”

Others at the apartment complex heard the same message. Before long, activists arrived, representatives from Starkville Strong, from the Oktibbeha County NAACP. Twenty minutes after Young made it home, Starkville Mayor Lynn Spruill arrived. The eviction moratorium had not even been dead a full day. It may not have helped, though; the Starkville evictions have nothing to do with rent money.

Spruill conferred with Judge Marty Haug, who confirmed that he had not yet signed a removal order. But the order is coming, as sure as the hurricane brewing in the south. Monday morning, his signature will adorn it. On Tuesday, Young, her boyfriend and their four children—11, 9, 7, and a month old—will lose their home. Accompanying them will be many of the dozens and dozens of families living across 61 units at Catherine Street Apartments.

No back rent can save them. The apartments’ new owners plan to rehabilitate the buildings. For this, they want all of the residents gone. Without an active lease, nothing in Mississippi State Code prevents the evictions.

“At this point, we don’t know where we’re going next,” Young said. Her family had experienced homelessness already, finding a place at Catherine Street Apartments in December 2020 with the assistance of Starkville Strong, a local civic support group. That same organization is working to help Young and her partner now. Exhaustion fills her voice, and sorrow quiets it.

A hotel stay, they hope, will get them through the first weeks of September. Then, God willing, another affordable housing unit, one that might provide shelter for more than a year before unceremoniously throwing them out.

Two weeks before Young’s near-eviction, Gov. Tate Reeves signed an extension of Mississippi’s state of emergency, with the delta variant brutalizing the state beyond any previous peak. Today, he declared a separate state of emergency due to the hurricane bearing down on the state. Young faces a more personal calamity. But she does not face it alone.

Emergency, emergency. Even the word, repeated enough times, loses its meaning. Coronavirus rages everywhere in Mississippi, filling hospitals until they spill out into field tents. More than 1,000 aid workers flood the state, staunching the bleeding of a wounded health-care system. Hurricane Ida looms in the Gulf of Mexico, poised to batter the coast and submerge the region in storms and floods and more medical crises.

The day of the eviction notice, Young held her baby in her arms, watching as her neighbors carted their furniture out of Catherine Street Apartments by the truckload. Some sat in the heat, sweating in the sun, masks hanging around their necks. Others locked their doors and waited, hoping for an intercession, still struggling to understand the ephemeral, inconsistent moratoriums. Was it legal to throw them out in all this? Hadn’t they paid their rent? Young had.

All around her, Mississippi unravels.

Residents, activists and local leadership alike agree that the owners of Catherine Street Apartments have been failing their tenants for close to two decades now.

Brandi Duncan-Herrington, of Starkville Strong, explained to the Mississippi Free Press in an Aug. 28 interview that the condition of the apartments is atrocious. “These units, there’s leaks (all over)—a lot of ‘em don’t even have air conditioning,” she said.

The Starkville Daily News’ Editor Jessica Lindsey encountered even worse in conversations with residents—knee-high water in some units. Residents reported maggot infestations, lack of refrigerators and other basic necessities, horrific living conditions dating back to the turn of the millennium. Starkville Daily News’ Reporter Cal Brown first reported the sudden evictions, visiting the apartment complex Friday in a state of chaos as residents scrambled to find accommodations and assistance removing their furniture.

Young, who asked not to be identified by her full name, has been without hot water for most of her time at Catherine Street Apartments. “We have to boil some water and put it in the tub so we can take a bath,” she said today. It took extensive negotiation just to get a working fridge in her apartment.

Starkville Ward 5 Alderman Hamp Beatty did not mince words in an afternoon interview with the Mississippi Free Press today. “It’s substandard housing. The living conditions have to be some of the worst in the city. The people here deserve to live better. There are buyers out there that purchase this type of property, let the cashflow come in and put no money into development. And that’s what’s happened to this property over 18 to 20 years,” he said.

Ownership of the apartment complex repeatedly changed hands. Simmons Properties, LLC, owned it last, though residents were more familiar with Maroon and White Realty, who managed the complex. This year, Ferretti Property Services, LLC, purchased the apartment complex. In early August, when many residents had yet to meet with anyone from Ferretti, dozens were summoned to appear in court for an eviction hearing.

At the Aug. 18 court date, residents heard no demands for back payment. Their leases had simply expired. No rent payments could satisfy the company. Tenants reported rent hikes after Ferretti Property Services took ownership of the apartment complex—rent going from $450 to $550—but back rent was not on the table for the evicted residents.

It was Aug. 25 when residents at Catherine Street Apartments found notices on their door that the hammer was dropping. “The reason for your eviction is that Ferretti Property Services is simply NOT renewing your lease agreement,” the notice read. “As the Landlord and by the Laws of the State of Mississippi we are allowed to not renew any lease as we so desire.”

Starkville Mayor Lynn Spruill told the Mississippi Free Press that there was nothing she could do to prevent the evictions. “These folks who own the apartments have gone through the proper legal process, and the judge has rendered the eviction notice,” Spruill said today. “They have been through the court system and, as far as I can tell, (the residents) have had proper notice.”

Ferretti Property Services, Spruill said, plans to address the years of decay that have left the Catherine Street Apartments with so many flagrant code violations. “The reasoning for the eviction has nothing to do with non-payment of rent,” the mayor said. “It’s because of a change of ownership—they are desiring to totally rehab those buildings. And in order to do that, they have to remove the individuals from the location.”

Spruill added that the evictions were “staggered,” and some residents have indeed received eviction orders scheduled for the end of September, not August. She added that her understanding of the Friday eviction notice that had so disturbed residents and local activists had given residents three days, not three hours, to vacate. Regardless, Herrington stated that the majority of the residents have until Tuesday to leave the premises.

The Mississippi Free Press could not reach Ferretti Property Services for comment by press time, but left messages.

“At this point, what we’re focusing our energy on is gathering community resources to rehouse these people as quickly as possible,” Herrington said. But options are slim in a college town like Starkville. “Affordable housing is a joke here,” Herrington finished.

‘Time is Not On Our Side’

Residents losing their homes next week face a dire world. The pandemic continues to roil Mississippi, and the impact of Hurricane Ida remains in flux for virtually the entire state. The Centers for Disease Control’s eviction moratorium focused on evictions for non-payment of rent, but the intent was to prevent the dramatic, well-documented threats to public health and safety from any evictions.

“Evicted renters …  lead to multiple outcomes that increase the risk of COVID-19 spread,” the CDC’s moratorium explained. Evictions scatter families across broad areas, driving transmission across city, county and state lines. Those same families tend to move toward denser housing, multiplying the impact of their displacement.

With Hurricane Ida expected to batter the state with storms as many residents lose their homes, Herrington hoped that storm shelters could provide the newly evicted families with a temporary shelter. 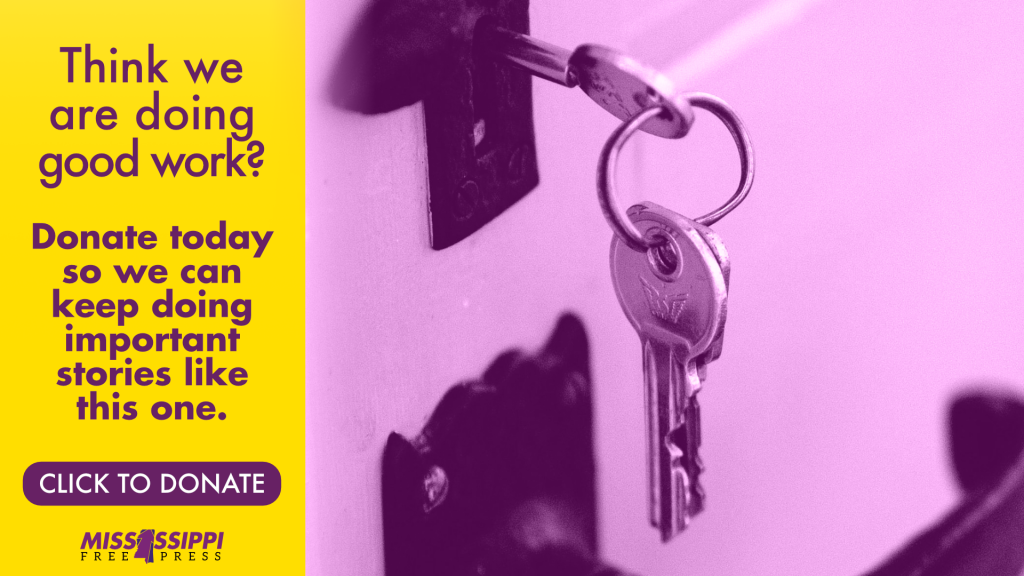 But Oktibbeha County NAACP Health Chairwoman Eileen Carr-Tabb worries that temporary solutions will fail many of the most vulnerable residents slated for eviction. “There are mothers that have small children being evicted. (There’s) a mother with a school-age child who has mental disabilities. They’ve been there for years. What we’re looking at is more than a physical impact, it’s a mental impact,” she told the Mississippi Free Press in an interview Saturday, Aug. 28.

Carr-Tabb paused, her voice quivering. Then she wept. “He understands something is happening, but what worries him is whether he’ll still be able to walk to school,” she said.

Families, too, are being torn apart by the blanket evictions. Relationships are broken up, she said, some returning to live with their families, and the others facing an uncertain future alone. “It’s not just families and children,” Carr-Tabb said. “It’s men and women that are being broken apart and separated.”

And it’s coming faster than any of the residents imagined. “Time is not on our side,” she said.

Young is praying for her family’s future. She prays for her community—that the community can survive with so many scattered from their homes. “I’m hurt,” she said. “I think we all are. But I know you’re not supposed to question God, so I just pray that everything is in his hands.”

With your help, we can do even more important stories like this one.
Support the MFP
PrevPreviousMississippi Passes NY’s COVID Death Rate As Gov. Reeves Says Mississippians ‘A Little Less Scared’
NextHurricane Ida Makes Landfall as ‘Extremely Dangerous’ Cat 4 Storm, 150 mph WindsNext