After just over a week of classes, students at Oak Grove Middle School will go all-virtual until Aug. 16 starting Tuesday amid widespread outbreaks of COVID-19. The school, which serves grades 6 through 8, is the third in the district to pause in-person classes since Oak Grove and Purvis high schools announced they were moving to virtual learning on Saturday. WHLT first reported the latest school house closure.

Since classes resumed in Oak Grove schools on July 22, at least 14 staff and faculty members have tested positive along with 73 students as of July 30. The schools have also quarantined at least 23 staff or faculty members and 340 students.

When Lamar County Schools first resumed classes, the district had a mask optional policy. After outbreaks in schools across the district, though, the school announced that masks will be required until at least Aug. 15. 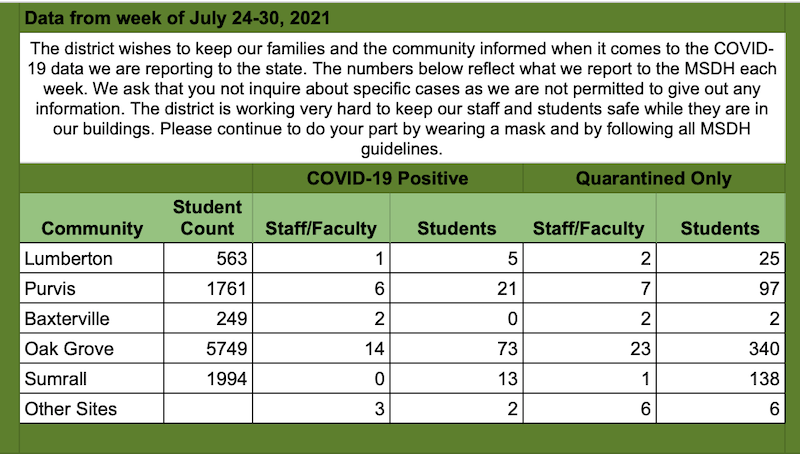 Districtwide, Lamar County schools have reported 39 positive cases among faculty or staff members and 178 cases among students for the first seven days of class. At least 773 students and 60 staff or faculty members had been quarantined in the district due to exposure to COVID-19 by July 30.

At the same point after seven days of classes in 2020, Lamar County schools had reported just five cases among faculty or staff and five among students in the entire district. Public health experts say the delta variant of COVID-19 that currently makes up nearly cases in the state is significantly more transmissible than earlier strains and appears to affect children more than past iterations of the virus.

Mississippi trails every state except Alabama in vaccinations, with younger residents the least likely to be vaccinated. Just 9% of Mississippians ages 12-15 and 15% of those ages 16-17 have received at least one dose of a COVID-19 vaccine. Children under 12 are not currently eligible for vaccination. For more information, visit vaccines.gov.