Roy Tamboli’s Buzzy Trip of Artwork: Bringing Light Into the World and God Into the Picture

Roy Tamboli’s large-scale abstract paintings grab the eye and don’t let go, pulling it along on a buzzy trip of color, energy, whirls and swirls. It’s a Big Bang kind of action, exploding across the canvas in a dynamic, expansive array of chromatic chaos.

In that motion lies the answer. Tamboli aims to make his paintings a personal ritual process, turning a not-so-pleasant memory into something more beautiful and positive.

“It’s a transformative process, from one place to another,” he says, studying his “Reworking a Memory,” with its spacey, knock-out blues, slashes of red, and white and licks of golden yellow, on display now at Fischer Galleries in Jackson.

“If I take something inside of me, and make it real with paint and canvas, and then reshape it into something else, in a higher kind of energy form, then I become a happier person. It’s kind of voodoo,” he adds with an impish smile.

“I don’t really always understand what’s going on in it, but I don’t feel like I need to.”

Encounters with other cultures’ ceremonial art on his travels got him thinking about rituals. “You go to Africa or New Guinea or South America, where people aren’t really thinking about the art. They’re thinking about, how can this object heal me in a ceremony?

At Home in Memphis

Tamboli lives in Memphis, just blocks away from his art studio in Midtown. His work space is an old auto shop that he’d coveted for decades when he’d take his car in for repair. Its 2,500 square feet of space, 16-foot ceilings, big windows on the north side, roll-up door and hoist were perfect for the artist, who also works in sculpture.

“Finally, the guy wanted to retire, and he offered it to me at something affordable,” says Tamboli, who’s had it for 22 years.

He’s focused more on painting in recent years, “partly because you run out of room for sculptures,” he chuckles, noting the huge crates in his studio, full of molds for bronze castings. “You’ve got to do something flat.”

Still, sculpting persists. Tabletop sculptures, in his Spinners series, put a resin twist on old toys and objects. Materials go on a machine that spins them around—“kind of that universal energy spinning out of control, things changing form and reforming into something else. It’s a Buddhist kind of point of view,” he says.

The Buddha Spinner has the spiritual teacher up top, with a “Star Wars” toy and more repurposed underneath. “To me, it’s about how things come alive and die and turn into something else, over and over again—that part of living and dying every moment kind of thing,” the artist says.

Tamboli’s Italian roots reach back to the little town of Marzocca, near Ancona on the Adriatic coast. He’s a descendent of Mississippi Delta Italians from Greenville and Lake Village, Ark.

A late 19th-century deal between a landowner and the mayor of Rome, for a planned community on a Lake Village plantation and the promise of 12 acres each, first enticed his farming ancestors over from Italy. “They ended up being sharecropper cotton pickers,” Tamboli says, “and they were not given the land that they were promised. But it turned out to be a way to get to America, so I think they were grateful for that part.”

His grandfather moved gradually up through small towns in Mississippi (his dad was born in Leland), winding up in Memphis in the early 1900s. He worked a bit in the restaurant business, but was also a truck driver for a grocery wholesaler, driving from Memphis to New Orleans when the route was still a gravel road, Tamboli says. “It took him a while to get back and forth.”

Tamboli never located an art relative in his family tree, including branches in Italy, where he still visits family. “So, I’m an oddball,” he says,

Art from the Start

Early memories recall his electrician dad, always in his garage shop doing things with his hands. “I wanted to imitate him, so I started putting together things into objects when I was a little child. They weren’t really electrical, but they used a lot of electrical parts.”

Without much to do in the Memphis suburbs, and without even benefit of art classes in high school, he made paintings at night and on weekends, with crayons, house paint, pastels, “anything I could get my hands on to make art, just for entertainment.

“The funny thing is, that part hasn’t changed. That’s still what I do. This is my entertainment.”

Once he started taking studio art classes at Memphis State University, the path was set. At night in the studio, the young art student would lend a hand to the “society ladies” there for continuing education, helping on their projects when needed. “They started buying bronzes that I was making from scrap-metal plumbing parts, melting scrap metal in the foundry that nobody was using, and casting these sculptures. … I thought, gosh, this could work.”

His painting “The Edge of Now” continues that universal, metaphysical mindset, with its Big Bang origin, expanding outward and still happening now. Energy collects in one area, about to become something physical, while vapor wisps float in another, “still moving, like the universe is, all the time.” 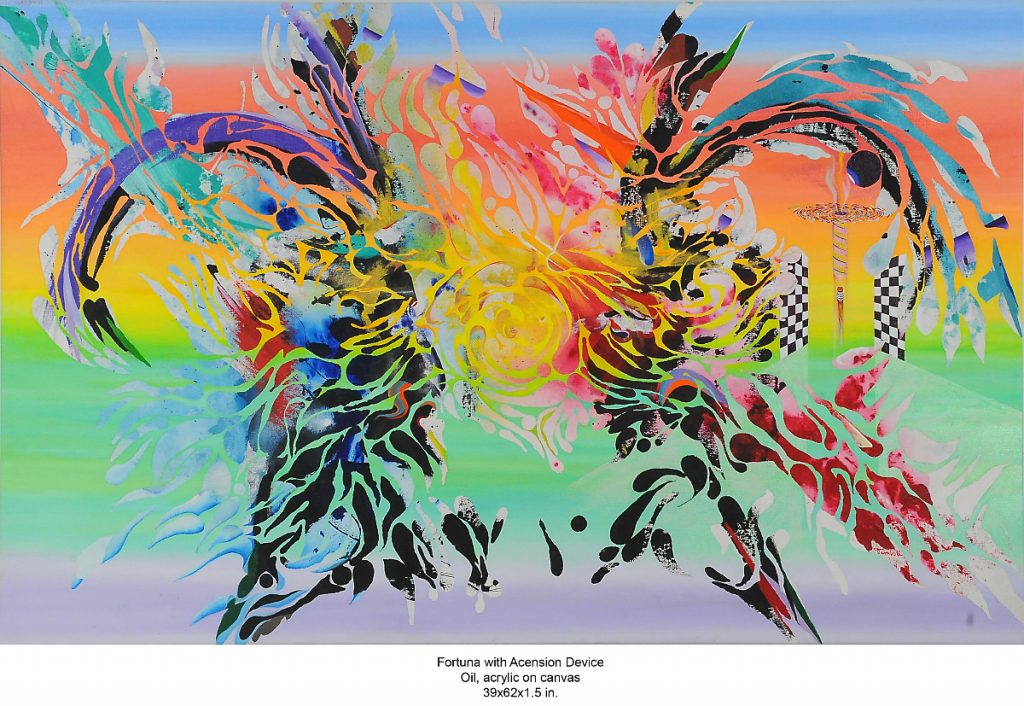 “Fortuna With Ascension Device” resembles a psychedelic cockfight at first glance. His aim for something happy and cheerful is met with glorious color. “It’s got that violent energy, too.” He returned to the painting a couple of years after completion, to add a small symbol of transformation—a vortex, with an embracing couple about to be sucked up to a higher plane.

A collection of smaller works belong to his Ancient Satellite Fragments series. They’re things he imagined came from an old, long-gone civilization, now fallen to Earth and found in places from New Zealand to a Mississippi River beach. If aliens made art, what would it look like?—that was his starting point for intriguing two-dimensional works with colorful designs and star maps.

Tamboli fights against a not-so-optimistic world with this art, which he aims to be energetic, colorful, joyful, “like bringing light into the world,” he says.

“I like the idea of bringing God into it as well. I think that’s part of my purpose.”

One time, a friend from Shanghai was in Tamboli’s studio, surrounded by his art, and wondered out loud, “What is this stuff about?”

Tamboli’s art is on display in “Roy Tamboli: Edge of Now,” at Fischer Galleries at 736 S. President St. in Jackson through late June. Visit fischergalleries.com

Sherry Lucas, a lifelong Mississippian, has been chronicling her home state’s creative folk and cultural landscape for decades. She grew up in Yazoo City, studied journalism at the University of Mississippi and was a longtime feature writer for daily newspapers in Jackson. Now a freelance writer, she continues to dig into the fertile fields of Mississippi arts and culture for stories to share.
All Posts
Republish This Story

With your help, we can do even more important stories like this one.
Support the MFP
PrevPreviousPresbyterian Rev. Robert Lowry: Proud to Be Gay and Leading a Loving Congregation
NextMississippi Law Enforcement Needs Major Reforms for Its Own SakeNext