Auditor Targets Anti-Racism Books in Mississippi Libraries: ‘A Cancer On Our Society’

“This program was started in 2020, so this is not new, and it is not an ongoing project,” Mississippi Humanities Council Executive Director Stuart Rockoff told the Mississippi Free Press this morning. “In the aftermath of the murder of George Floyd, we sensed that there was a great interest in books on topics of racism, and I actually learned from speaking with another state humanities council that had run a similar program, and I thought we could offer small grants to state library systems to purchase books that are in demand. So that’s what we did.”

He said the council spent about $29,000 of “majority non-public money” on the program with about two-thirds of the total raised through private donations.

“We gave them a suggested long list of books, a mix of humanities books and scholarly books and books that were popular at the time,” Rockoff said. “But they were free to purchase whatever books they wanted as long as they were related to the general topic. … The list was long with lots of great writers on it.”

Rockoff did not respond to White’s remarks, but did explain his views on the meaning of “anti-racism.”

“That term has become more controversial in the past year than it was at the time we used it. I’m not sure why opposing racism is controversial, but there you go,” Rockoff said.

The most popular children’s book, he said, was Helaine Becker’s “Counting On Katherine: How Katherine Johnson Saved Apollo 13.” Johnson was a Black NASA mathematician whose work was pivotal to the Apollo 13 mission and the astronauts’ safe return. 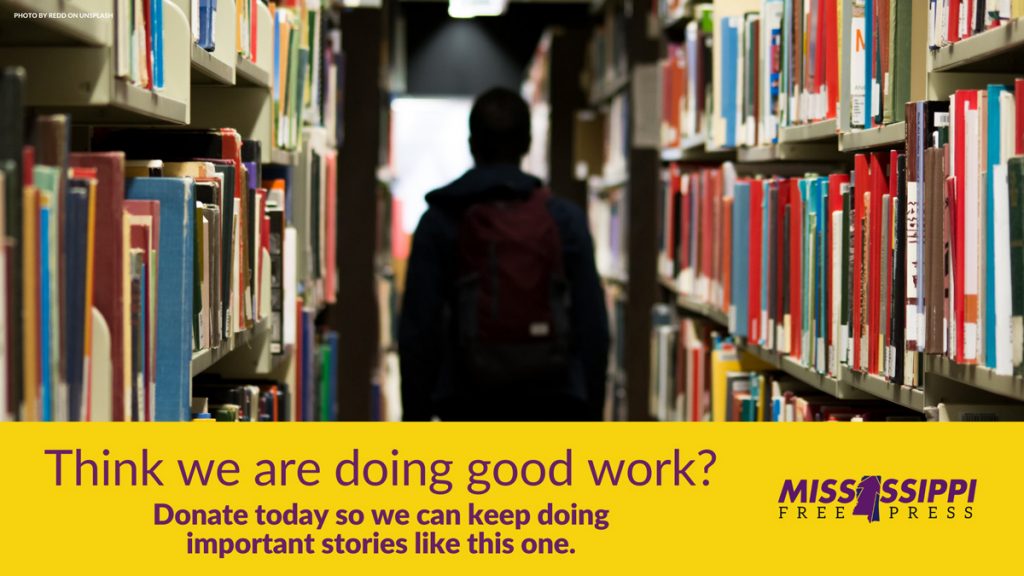 Other anti-racism books on the reading shelf include works such as Mississippi native Angie Thomas’ “The Hate U Give” (Thomas is a member of MFP’s advisory board), a young-adult fiction novel about a Black teen protagonist who witnesses the police shooting of a childhood friend; Mississippian Jesmyn Ward’s memoir, “Men We Reaped”; and Matthew A. Cherry’s children’s book “Hair Love,” which promotes pride in Black hair. Those three authors are Black.

But in his remarks yesterday, White pointed to a book by a white author to demonstrate his issue with the anti-racism bookshelf.

“I actually found this one in the kids section of a Mississippi library. It’s called, ‘Not My Idea: A Book About Whiteness.’ And it is written by this woman right here, Anastasia Higginbotham,” he said, holding up a photo of the white author. “So what is this book about? It can really be summarized on one page in this book: ‘Whiteness is a bad deal.’”

The book’s Amazon page says it “ offers an emotional inlet to the crisis white children experience when they know people are being harmed and they are actively discouraged from feeling anything about it.”

“Everyone should be for teaching civil rights history to children,” White continued. “They should not be for teaching kids that an idea about whiteness that some white lady made up five minutes ago is evil.” In fact, studies on whiteness and anti-racism stretch back to the early 20th century.

“These ideas are a cancer to our society. They pull us apart, not push us together and make it harder to have honest conversations about race. If we wanted to create a world or have our children create a world where racism no longer exists in a few years, maybe the adults should stop teaching the kids to be racist. In the coming weeks, the Legislature will, I think, begin to ban these ideas from being taught in schools,” he said, referring to an effort to ban so-called “critical race theory” in schools.

Despite the auditor’s criticisms of the Anti-Racism Reading Shelf, Rockoff said the Mississippi Humanities Council “stands behind this program.”

“For us in a place like Mississippi, understanding the history of racism in our state and how that history still shapes our lives today and how we can work together to overcome it, that’s what our vision was for this program,” he said.

CORRECTION: Matthew A. Cherry is the author of “Hair Love.” Vashti Harrison is the illustrator, not the author, as an earlier version of this story incorrectly stated. We apologize for the error.

With your help, we can do even more important stories like this one.
Support the MFP
PrevPreviousMississippi Begins 2022 Awash In COVID-19, Hospitalization Data Mixed
NextTrans People Have Long History in South—But Politicians Ignore ItNext