Holmes County Central High School students wore the required red polos and khaki pants that are part of their school uniforms as they fidgeted in their seats, waiting for documentary director Rachel Boynton and her one-man crew to adjust the lights and sounds for her film, “Civil War (Or, Who Do We Think We Are?).”

But when members of Antwayn Patrick’s U.S. history class spoke on camera, their answers were bold and prophetic. Many of the students at the 99% Black public school appear in one-on-one interviews throughout Boynton’s documentary that looks at a country, and Mississippi in particular, that is divided along racial lines, even over what real history looks like.

The students talked candidly about their own families’ reticence to discuss race and how they had broken that silence with class discussions about the Civil War and its far-reaching implications that is nowhere more apparent than in resegregated schools like in the students’ district on the edge of the Mississippi Delta. It is a county with at least 10 documented lynchings.

“I don’t have white friends,” one student told Boynton. “I don’t even really have white associates, because I don’t really know any white people.”

The student paused for a beat before making a more pointed admission. “Sometimes, I wonder about Black and white people in Holmes County who have the same last name, what that means.” It can mean that the white people’s ancestors owned the Black students’ ancestors, a fact seldom addressed in public.

Off-screen, Boynton asked one of the unnamed students a simple question: “Do you think we’re living in a divided country?”

The student took a breath and responded with the answer that would be the haunting theme of the film: “Every day.”

Stubborn Belief in ‘Lost Cause’ Mythology

“In the beginning, the South was afraid …,” Boynton’s documentary begins. Though she posits throughout the 90-minute film that the 19th-century South was scared of many things, the filmmaker herself fearlessly asks difficult questions.

Boynton, who lives in New York, insists that Black and white southerners confront difficult aspects of their collective history and the ways that institutions have taught and continue to teach this history to new generations.

The filmmaker situates much of this journey for the truth in Mississippi, with white people’s stubborn belief in “Lost Cause” ideology pockmarking its long post-war journey. The “Lost Cause” rose out of the ashes of the defeated Confederacy, with white southerners claiming that the Civil War was an unjust display of northern aggression and that their dead should be remembered as heroes who died protecting elusive ideas of states’ rights.

Mississippi has memorialized and helped continue many of its citizens’ blindness to the ugliness of racism through the raising of Confederate monuments to enshrine such beliefs, and shots of these sentinels appear throughout the film.

One such monument stands less than a mile from Holmes County Central High School in Lexington, Miss., where Boynton filmed Antwayn Patrick’s U.S. history class. The statue in front of the courthouse is clear that it honors not only the soldiers, but the cause: “They were right who wore the gray and right can never die,” it proclaims about the soldiers “who fought in defense of our constitutional rights.”

That, of course, meant the right to own slaves.

‘We Haven’t Done Any Justice to the Civil War’

“Far too often, we look too far away to tackle those tough questions and topics,” teacher Antwayn Patrick said in a phone interview with the Mississippi Free Press. “I want to bring students into (what happened) in Holmes County or Mississippi, so I have to bring it home.”

Patrick said that making the Civil War and the topic of civil rights personal to his students is not hard to do, as he simply has to point to the Confederate monument that holds the majority-Black county in its shadow.

“We had a soldier who went to Vietnam, a Black soldier. He was heroic because he saved his platoon by diving on a live grenade,” Patrick remarked. “There’s a memorial to him, but on the same square, you have a monument to the unknown Confederate soldiers.”

Bringing such stinging examples to his students should be all part of a day’s work for a history teacher, Patrick said, but he acknowledged that efforts to teach about the Civil War and Reconstruction in Mississippi have often been woebegone.

“We haven’t done any justice to (the Civil War) in regards to teaching it,” Patrick said. “It’s not delved into because it’s usually taught at the end of the year, but for the South, for Mississippi …  the Civil War needs to be delved into.”

One of Patrick’s students appeared to disagree with her teacher’s assessment of the necessity of exploring the tough topics of the Civil War—when Boynton asked her whether she “would want to know” the Civil War-era history of her family. “Not really,” the student responded. “I think it would be painful.”

The filmmaker then asked the student if she thought knowing the answer would make her angry, and the student shook her head. “I want to hate people based on what they did now, not what their family did a hundred years ago,” she concluded.

The now-principal insists that the painful parts of Civil War history are important for any educator who aims to teach the era holistically. “We want kids to think for themselves,” Patrick asserted. “For every major topic in U.S. history, there’s a controversial topic that’s underlying it: race, poverty, sexism. There are hidden problems in America that you want to attack.”

Patrick counts the fact that his students came to such articulate conclusions—however disparate—on their own as a success that he hopes will have long-lasting impacts in the lives of his young scholars.

“My greatest fear is for them to say they didn’t learn much (in my class),” Patrick said. “Before they leave my class, they have to give me a vision of what they want to do with their lives.”

‘Up There on the Mantel, In Its Box’

The Civil War’s impact on race relations did not affect all of the students featured in “Civil War (Or, Who Do We Think We Are?)” the same way as those in Patrick’s class. A unnamed white college student in Tennessee admitted that she did not learn about the brutality of slavery and its role in the Civil War until she took survey-level history courses in college.

“What would your family think?” Boynton asked the student, who admitted that her family, especially her father, would be unhappy to know that she had parted sharply with her familial “heritage.” When pressed about what that heritage looked like for her Mississippi family, the student told the director about her family’s Confederate flag.

“We don’t take it out, and we don’t rub people’s noses in it,” the student replied, looking embarrassed. “But it’s up there on the mantel, in its box.”

The insidiousness of race reared its head again when Boynton visited a private, all-boys high school’s history class in Tennessee. Like Antwayn Patrick’s students, these students wore uniforms, too, but with ties and collared shirts.

When asked if slavery led to lingering unfair treatment for Black Americans, many of the students responded in the negative, citing affirmative action in the college admissions process as evidence of a more equitable society.

The two Black students in the class never spoke on camera. 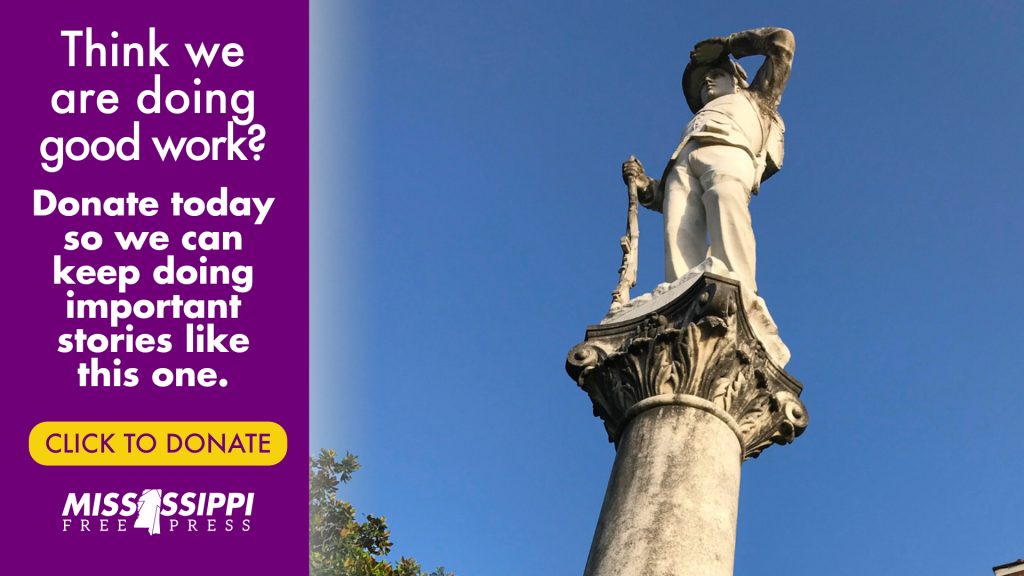 In the documentary, Missy Jones, the director of the paralegal studies and public history programs at Mississippi College, expressed that her family’s views of “southern heritage” affected much of her early life. One of her first words, for example, was a racial slur that her family members had taught her as a baby.

During college, Jones wrestled with her familial views and the ugly truths of racism that she saw plainly as a young adult, and eventually, she and her husband left the state. “We were discouraged,” Jones said in an interview with the Mississippi Free Press. “But after eight years away, we thought we might be able to come back and make a difference.”

When Jones did return to her alma mater and now-employer, Mississippi College, for the second time as a graduate student, she began trying to make that difference through her research, uncovering the oft-unspoken Clinton Massacre.

The only acknowledgment the City of Clinton made that Jones could find was a 1949 marker that referenced the “bloody riot,” but Jones said that the language on the sign itself favored the perspective of the Lost Cause. “It mentioned carpetbaggers and white Democrats coming back into power,” Jones said, but eventually, even that marker came down.

“No one has ever been able to tell me why it was taken down and why it was never replaced,” Jones said, reflecting on how deafening she found the city’s silence. Eventually, Jones turned to Black voices for answers about the massacre that left somewhere between 30 and 50 Black Clintonians dead in its wake.

Jones became the top academic authority on the massacre after combing through the Boutwell Report in the Congressional record, which included hundreds of Black eyewitness accounts of the riot and the ensuing racial unrest. She interviewed Black families as well, recording their family’s secreted oral histories of the event, many of which had long gone untold out of a fear of usurping the prevailing white narrative—a narrative that insisted that Black Americans had incited the violence.

When Jones led Boynton to the site of the violence and the commemorative sign that Clinton finally erected, 140 years to the day after the event, the pair of women passed Clinton’s bustling downtown and its adjacent neighborhood, eventually walking through overgrown weeds to arrive at the marker. The sign stood alone and unlit, precariously near the railroad tracks.

“This is it?” the director asked. “This is it,” Jones confirmed.

Since the documentary’s filming, a railroad worker accidentally knocked down the sign, an event that Jones fears will continue if the sign isn’t moved to a more prominent location,

Who Do We Think We Are?

Students, professors, protesters and even lawmakers gave disparate answers to the question throughout the documentary. Perhaps Mississippi has moved a step closer to a truer answer since the events of the film, as the film heavily featured debates over the Confederate emblem on the Mississippi flag, which flew in the background of many of Boynton’s shots throughout the Magnolia State.

A supermajority vote in both houses of the Mississippi Legislature permanently retired the emblem in June 2020, and 60% of voters affirmed the new design in a statewide ballot later that same year. The number represented almost a complete flip from the state’s 2001 rejection of the flag’s removal.

“Civil War (Or, Who Do We Think We Are?)” is streaming now on Peacock, Hulu and YouTube TV.

Taylor McKay Hathorn is an alumna of Mississippi College’s English program and is presently employed by her alma mater  in the Office of the Registrar. Taylor is a Mississippian by birth and a Jacksonian by choice, and you can follow her on Twitter @_youaremore_. She is part of the MFP’s Mississippi Trusted Election Project team (mfp.ms/voting).
All Posts

With your help, we can do even more important stories like this one.
Support the MFP
PrevPrevious10 Years After Mississippians Rejected ‘Personhood,’ Federal ‘Life at ‘Conception’ Efforts Underway
NextThe Hate They Censor: Purging KKK Truth and Angie Thomas to Bury Lessons of HistoryNext