Evans, who is white, tried Flowers six times for the shooting deaths of four people at a furniture store in Winona, Miss., in July 1996. Investigators never found the weapon that prosecutors alleged Flowers used to commit the murders. Courts overturned four convictions against Flowers as Evans faced accusations of racial discrimination in jury selection.

“Curtis Flowers never should have been charged,” Rob McDuff, an attorney at the Mississippi Center For Justice who represented Flowers in his quest for freedom, said in a statement today announcing the lawsuit. “The murders were clearly the work of professional criminals. Curtis Flowers was 26 years old with no criminal record and nothing in his history to suggest he would commit a crime like this. The prosecution was tainted throughout by racial discrimination and repeated misconduct.

“This lawsuit seeks accountability for that misconduct.”

A ‘Relentless, Determined Effort To Rid The Jury Of Black Individuals’

Jurors convicted Flowers in his first three trials, but the Mississippi Supreme Court overturned each of them, citing prosecutorial misconduct, including racial discrimination in jury selection. After hung jurors during the fourth and fifth trials resulted in mistrials, Evans won a conviction and a jury sentenced Flowers to death during a sixth trial in 2010.

In June 2019, The U.S. Supreme Court overturned the latest conviction, citing racial discrimination in jury selection. During Flowers’ first four trials, Evans attempted to block all 36 prospective Black jurors from serving. Across all six trials, 61 of the 72 jurors tasked with deciding his fate were white. Winona is a 54% Black, 41% white town; Montgomery County is a 53% white, 45% Black county.

“The state’s relentless, determined effort to rid the jury of black individuals strongly suggests that the state wanted to try Flowers before a jury with as few black jurors as possible, and ideally before an all-white jury. We cannot ignore that history,” Justice Brett Kavanaugh wrote for the court’s 7-to-2 majority in that case.

Flowers was allowed to go home in December 2019 after lawyers from the Mississippi Center for Justice filed a motion for bail with the Circuit Court of Montgomery County, noting that he had been peaceful during his 23 years in prison and had no prior criminal history before his original arrest.

‘There Were Multiple Alternative Suspects’

Despite the U.S. Supreme Court ruling and his return home, the possibility of returning to prison still loomed over Flowers. Soon after, Evans said he was considering trying Flowers a seventh time. The attorney general at the time, Jim Hood, had defended Evans’ conduct at the U.S. Supreme Court. In 2018, Hood even backed Evans’ effort to block Flowers from attending his mothers’ funeral, citing concerns about public safety.

After the U.S. Supreme Court ruling in 2019, Hood, then a Democratic candidate for governor, said it would be up to Evans to decide if Flowers would face a seventh trial and that he was “confident” that Evans would follow the court’s guidance.

In December 2019, Flowers’ attorneys filed a motion seeking Evans’ recusal, and Evans withdrew from the case on Jan. 6, 2020.

Eight days later, Republican Lynn Fitch succeeded Hood as the state’s new attorney general, and her office began reviewing the case. In Sept. 2020, Fitch filed a legal motion with the Circuit Court of Montgomery County, asking for the dismissal of the case against Flowers. The judge dismissed the case, finally ending Flowers’ 23-year prosecution.

There was “no clear prosecution witness that incriminated Mr. Flowers who is alive and available and has not had multiple, conflicting statements in the record,” Fitch wrote in her motion to dismiss. Other evidence that Evans had not presented at trial, she noted, offered “exculpatory evidence” in Flowers’ favor and pointed to other potential suspects.

The lawsuit Flowers’ attorneys filed today details some of the evidence and alternative theories the attorney general mentioned.

“Despite Doug Evans’ constant claim over the years that there were no suspects other than Curtis Flowers, there were multiple alternative suspects, including people with histories of violence, murder, and commercial burglaries,” the lawsuit says. “One suspect owned the same type of gun that the prosecution claimed was the murder weapon. His cousin is a violent career criminal who was arrested for another commercial armed robbery in the spree that afflicted the Montgomery County area in the mid-1990s, and another cousin had attempted a rooftop robbery.

“Two of the alternative suspects wore Fila Grant Hill shoes, which allegedly were worn by the perpetrator of the Tardy Furniture murders. Most of them lived in Montgomery County and the others apparently were in Mississippi around the time of the murders. By contrast, Curtis Flowers was a gospel singer with no criminal record when he was arrested at the age of 26.”

In March 2021, a state court awarded Flowers $50,000 a year for 10 years—the maximum allowed for someone who proves they were wrongfully prosecuted. The latest lawsuit, which is separate, asks the court to award Flowers “compensatory damages, attorneys’ fees, and costs” in addition to “further relief as the court deems equitable and just.”

In addition to McDuff and the Mississippi Center For Justice, Flowers’ representatives in the current lawsuit against Evans include Jonathan L. Abram, Kathryn Marshall Ali, W. David Maxwell and Kaitlyn A. Golden of Hogan Lovells. Like the Mississippi Center For Justice, Hogan Lovells attorneys represented Flowers during his long fight for exoneration.

“Too many of the innocent people wrongly imprisoned in this country were victims of misconduct by prosecutors and law enforcement officers,” said Vangela M. Wade, president and CEO of the Mississippi Center for Justice. “Most are not held accountable. While Curtis Flowers was trapped behind bars for nearly a quarter-century, Doug Evans has faced virtually no consequences for his crusade to convict this innocent man and for his discriminatory manipulation of the legal system. We are pursuing this lawsuit to bring some level of accountability.” 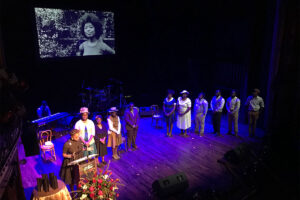 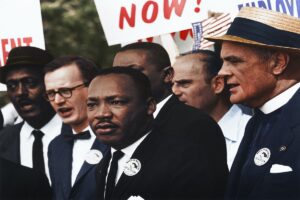 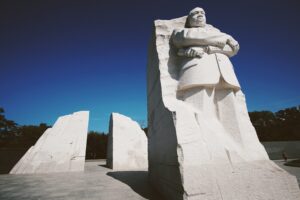 With your help, we can do even more important stories like this one.
Support the MFP
PrevPreviousWhere The Devil Comes In: Income Tax on Trial at the Mississippi Legislature
NextMultiple Pregnant Women Die of COVID in Mississippi Hospital: ‘We’re Talking C-Sections in the ICU’Next