As Delta Variant Soars, Mississippi Sees Most COVID-19 Cases in One Day Since March

The Mississippi State Department of Health reported 427 new COVID-19 cases for July 7—the most for any one day since March 13. After a months-long plateau, novel coronavirus cases and hospitalizations are once again rising in the Magnolia State after the more contagious Delta variant became the state’s dominant strain last month.

In a tweet yesterday, State Health Officer Dr. Thomas Dobbs reported findings that, between June 16 and June 25, the Delta variant accounted for about 78% of new cases. That means it was already the dominant strain on June 24 when the state health officer predicted it would overtake the others “in 1-3 weeks.”

“Now seeing the predicted rise in case, hospitalizations and COVID like illnesses. If you are not immune, not vaccinated please be careful,” Dr. Dobbs tweeted today.

Lamdba Variant: On Its Way?

Public-health officials in 30 countries, not yet including the U.S., have also detected another variant, the Lambda variant, which they caution could be deadlier than the Delta one.

In Mississippi, daily cases, hospitalizations and deaths remain far below their winter peak, when the state was reporting more than 2,000 cases on some days. But public-health experts are concerned that the recent rise could presage something worse at a time when less than one-third of Mississippians are fully vaccinated and the state ranks last in the nation when it comes to vaccines. Nationwide, about 48% of the population is fully vaccinated compared to just 31% in Mississippi.

On June 22, Mississippi’s seven-day average for new cases fell to 107, the lowest recorded since the third week after the pandemic first arrived in the spring of 2020. Today, the daily case average climbed to 247, the highest point since April 26, 2021. 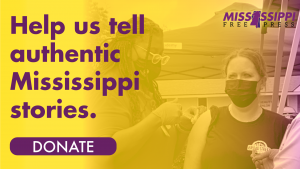 Despite Mississippi’s low vaccination rates and increasing cases, the state’s senior U.S. senator, Roger Wicker, used his social media accounts today to push for an end to the federal government’s mask mandate on airplanes and other public transportation.

“The pandemic is subsiding and masks are no longer required in most settings. Yet airlines are forcing fully vaccinated individuals to wear a mask or risk losing their seats,” wrote Wicker, who received criticism for having his mask off during an October 2020 flight. In fact, the seven-day average for new COVID-19 cases is currently trending up nationwide as the Delta variant spreads in other states.

Dr. Dobbs continues to urge Mississippians to get vaccinated. On June 29, he revealed that unvaccinated Mississippians accounted for 96% of cases, 95% of hospitalizations and 90% of deaths from COVID-19 over the prior month. The COVID-19 vaccine became widely available in Mississippi in early spring, but after an initial rush, demand for the vaccine dried up. The State has returned nearly 900,000 vaccines to the federal government due to low demand.

“COVID vaccines are saving lives and could save more,” Dobbs wrote on June 29.

He said that the fact that individuals who are vaccinated account for a higher percent of new deaths than they do new cases could be caused by “increased exposure” for “older folks with medical issues for whom the vaccine may not be as effective.” Many older Mississippians who stayed at home over the past year have begun resuming social activities since becoming vaccinated.

Long before the Delta variant’s arrival, clinical trials found that the Pfizer and Moderna vaccines were, respectively, about 95% and 94% effective at preventing COVID-19 infection several weeks after receiving both doses, while the Johnson & Johnson one-shot vaccine was about 66% effective.

Even among breakthrough cases, though, trials found that each vaccine prevented most of those from becoming severe, including the Johnson & Johnson vaccine, which the U.S. Food and Drug Administration reported was 85% effective at preventing serious illness, hospitalization and death.

With the Delta variant now the dominant strain, several studies have found that the current vaccines may now be somewhat less effective at preventing symptomatic infections, but remain highly effective at preventing deaths and severe illnesses. Pfizer announced today that it will seek emergency FDA authorization for a third booster shot that better protects against the Delta variant.

On Meet The Press this past sunday, Dr. Anthony Fauci said he would probably wear a mask if he traveled to Mississippi due to the low vaccination rates and suggested residents who have stopped wearing masks after getting vaccinated should consider doing so, too.

“I might want to go the extra mile to be cautious enough to be sure that I get the extra added layer of protection, even though the vaccines themselves are highly effective,” he said.

The Mississippi Department of Transportation announced yesterday that it will begin offering free rides to vaccination sites for Mississippians.

“Schedule a free ride Get a free vaccine,” Gov. Tate Reeves tweeted yesterday. It was the first time the state’s leader had used his social media accounts to promote vaccines since April 30.

COVID-19 vaccines are free and widely available. For more information on the vaccine, go to the MSDH website. To find vaccine locations near you, go to vaccines.gov.

With your help, we can do even more important stories like this one.
Support the MFP
PrevPreviousNot A Drop To Drink: Jackson’s Slow-Going Water Pump Repairs Leave Bitter Taste Behind
NextAl Stamps and Richard Middleton: The Yin and the Yang of Black ExcellenceNext