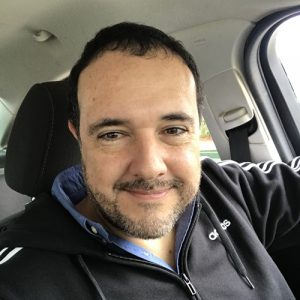 Carmen Quintero, 21, and her 2-year-old son Miguel (not their real names), left Ocotepeque, Honduras, to begin a dangerous journey through Guatemala and Mexico that ended 22 days later when they reached the southwest border of the United States on June 17, 2019. The risky trip included traveling in the back of several trucks, hoping to find a better life in this country.

It was a difficult trip, especially since Miguel suffers from Down syndrome and has not yet learned to walk, so his mother had to carry and take care of him all the time in the midst of the journey. At the border, Quintero turned herself in to the immigration authorities, the same way thousands of immigrants do to legally request political asylum in the U.S. every month.

“I just have bad memories about the trip, like the difficulty of getting a place to sleep and bathe. Some nights there was a place to rest like that, but others we just sat or stood without resting at all in a place like a gas station or a store near where the truck parked,” Quintero said. “And that was going well for us, because other times we had to take refuge in the middle of nowhere where the night caught us.”

Immigration agents let Quintero enter into the U.S., after opening a legal process that she must follow to maintain her stay in the country. She then crossed the border and headed to Jackson, where her husband was waiting for her with the couple’s other child: a 4-year-old girl.

“I was told to report to another office in Pearl two days later,” Quintero said. She did not specify where on the border she arrived but said she has always followed the directions immigration officials have given her.

Quintero was fortunate to find a way to cross the border and establish herself in the U.S. That was not the situation for the 139,533 would-be immigrants who were rejected for March of fiscal-year 2020. Department of Homeland Security officials often deem them inadmissible when they try to cross the border to seek humanitarian protection at U.S. ports of entry.

Immigration Hearing Postponed Due to COVID-19

Quintero had a hearing scheduled for April 13 in an immigration court in New Orleans, but the hearing was postponed due to the shutdown of the courts amid the COVID-19 quarantine. Now she does not know how to find out about the new date, as all immigration processes are on hold until May 15.

“The hearings that have been postponed will probably be rescheduled anywhere from six months to a few years from their original court date,” said Kyle-Chung Tsao, an immigration attorney at Elmore & Peterson law firm in Jackson.

Two types of immigration proceedings were delayed in Jackson. The first one involves immigration court, which takes place when an immigrant has to prove in a hearing why he or she should not be deported from the U.S. The second is the affirmative immigration proceeding through United States Citizenship and Immigration Services, which includes interviews, biometrics, naturalization ceremonies and other appointments with the agency.

Immigrants usually go through many years of procedures before getting their final hearing. Before the coronavirus pandemic, there was already a tremendous backlog of cases due to the high number of people seeking relief from deportation and the limited number of courts and judges available to hear them.

“Coronavirus is causing immigrants to stay in limbo with a constant fear that they will be removed from the United States,” Attorney Kyle-Chung Tsao

Federico Garcia (not his real name), a Latino client of Tsao who lives in Mississippi, found out after a long process of seven years applying for a green card that his final hearing had been postponed last April, five days before the court date. He hadn’t been given a new court date as of press time.

Garcia entered the States and claimed asylum, but while waiting for his case to be heard, he met a U.S. citizen, fell in love and got married. Now he is seeking a green card based on his marriage.

“I would say that most of the green-card applications we see in our law firm are based on marriages and U-visas,” Tsao said.

The U nonimmigrant status (U visa) is set aside for victims of certain crimes who have suffered mental or physical abuse and are helpful to law enforcement or government officials in the investigation or prosecution of criminal activity.

Homeland Security reports that 1,031,000 immigrants obtained permanent resident status in fiscal-year 2019, which was a reduction of 6% compared to 2018. On the other hand, 823,000 persons were naturalized as Americans citizens during the same period, which was an increase of 8.1% compared to 2018.

In general, the delay in courts will affect immigrants’ ability to gain work authorization, visas, citizenship applications and green-card applications.

“Coronavirus is causing immigrants to stay in limbo with a constant fear that they will be removed from the United States,” Tsao says.

Quintero fears being deported, so she asked to keep her identity secret for this article. But she could be deported back to Honduras for reasons she may not know about, Tsao said. It could be as simple as missing important mail from the court.

“The immigration authority will notify people about all court dates by mail, and if they send it to an old address because it was not updated, then that person could be deported,” Tsao said. He recommends immigrants to keep their address updated with the court.

Right now, the court dates for nondetained immigrants have been postponed indefinitely, but if an undocumented immigrant is arrested and then turned over to Immigration and Customs Enforcement, that person faces deportation.

Even the spread of the coronavirus has not been a sufficient reason to stop deportations. On April 15, a Guatemalan government official said 44 Guatemalans deported from the United States tested positive for COVID-19.

“I think that is unfortunate that deportation flights like this are still happening. In my opinion, it creates a risk of infecting more people, either here in the United States or the country that these people are deported to,” Tsao said.

Seeking Therapy for Her Son

Quintero has no money to pay for a lawyer, and every time she calls the court, no one answers the phone. She is trying to find out about her new hearing date, and hopes to find a Spanish translator because she does not speak enough English to carry on a conversation.

Despite the pandemic, she hopes to fulfill the dream for which she came to this country: to achieve better living conditions than those she had in Honduras, where she was extremely poor and had no opportunities for development.

Quintero was unable to get a job due to Honduras’ poor economy. She never had enough money to pay for her son’s doctor because the income her family received wasn’t even enough to meet their basic needs.

She spent the past few months at home caring for her children, but now, given the money needs that quarantine has brought to undocumented immigrants, she decided to work in construction alongside other immigrants in the Jackson area. Her husband also is a construction worker so she has to ask a friend to take care of her children while she and her husband are working.

For now, Miguel needs to learn to talk and walk, and Quintero is telling his story in hopes of finding someone to help him out.

“A pediatrician told me in Honduras that my son needs foot therapy to learn how to walk,” Quintero said. “He just crawls up and sits down, but he can’t stand up straight. The boy does not speak—only says mom and dad.”

Mauricio J. Quijano has worked for several newspapers writing on different topics ranging from crimes to economic matters. He has a bachelor’s degree in Social Communication and a master’s in Business Education from Mississippi College. Currently, he is attending a program at Hinds Community College, is a freelance journalist and a regular contributor to the Mississippi Free Press. Send story tips to [email protected]
All Posts
Republish This Story

With your help, we can do even more important stories like this one.
Support the MFP
PrevPreviousPandemic No ‘Excuse’ to Grant Prisoners Early Release, Mississippi Governor Says
NextWalking Up Mama’s Backbone: She Allowed Me to Question WhitenessNext