Landon Woodson had “always been healthy until Covid,” his mother insisted in a Sept. 23 Facebook post. But two days later, the North Pontotoc High School football player died of COVID-19 in a Memphis Children’s Hospital after suffering cardiac arrest, she wrote.

The Pontotoc County teen’s death, which the Sun Herald reported this afternoon, is one of two child COVID-19 fatalities the Mississippi State Department of Health reported today. Another unidentified child between the ages of 11 and 17 also died.

Ten days before Woodson’s death, his school district, the Pontotoc County School District, announced that it would be ending its mask mandate on Sept. 17.

“After reviewing recent district Covid data, which showed a large decrease in the number of district quarantines and positive cases, the current PCSD mask mandate will expire on Friday, September 17th as planned. … PCSD’s goal is to keep our students in school as much as possible and as safe as possible,” a letter the district posted on its Facebook page on Sept. 15 said.

The Pontotoc County School District began the year with no mask mandate in place on Aug. 3. On Aug. 17, though, the district announced that “despite preventative measures” like disinfecting and recommending students wear masks and use hand sanitizer, “COVID-19 cases and quarantines have continued to rise at a fast pace.” The district decided to enact a mask mandate beginning on Aug. 18.

“Requiring masks will not only potentially help reduce the transmission of COVID-19, but also help reduce the number of potential quarantines and athletic forfeitures,” the district said in an Aug. 17 letter. That same day, the district announced that North Pontotoc High School, where Landon Woodson attended, would go all virtual for two weeks from Aug. 18 until Sept. 1 “due to an excessive number of students and staff who have quarantined or tested positive.”

The district allowed the mask mandate to expire on Sept. 17, though. Since, the Pontotoc County School District’s official policy has been that “masks are not required but are highly recommended in the buildings.” The school’s policy says that “if two students are sitting close together, and both choose to wear a mask, no quarantine will be required, even if one of the two students tests positive for COVID-19.”

On Sept. 26, the district shared a Facebook post from Woodson’s high school football coach about the student’s death, asking families to “keep Landon’s family and (North Pontotoc High School) in your thoughts and prayers.”

The Pontotoc School District is one of several districts that have dropped mask requirements in recent weeks as COVID-19 cases declined. When most schools reopened in August, the majority did not require masks, but most implemented mask mandates after a boom in cases at schools statewide quickly dwarfed the entire fall 2020 semester. Cases have since fallen from 5,763 students testing positive statewide during the week of Aug. 16 to 1,084 last week.

It is unclear when Woodson first became ill or where he contracted the virus. But a Facebook post by his mother indicates that an ambulance first arrived to transfer him to a hospital sometime around 3 a.m. on Sept. 22.

“Please Please Get Vaccinated,” Woodson’s mother, Tracie Young, wrote on Sept. 23, including a photo of her son in his football uniform and one of him on a ventilator in the hospital. On Sept. 25, she confirmed that her son had died.

About 48% of eligible Black Mississippi children have received at least one dose of the COVID-19 vaccine while the same is true for about 27% of eligible white children. In a tweet today, American Academy of Pediatrics Mississippi Chapter President Dr. Anita Henderson attributes the racial differences to “Black churches, parents and schools … doing a great job” in a tweet today.

Black Mississippi teens much more likely to be vaccinated than white teens. Black churches, parents and schools doing a great job. Cases in MS are down but we need vaccination rates to improve. 2 more pediatric deaths in the last week 😢#MaskUpMS #VaxUpMS #PutKidsFirst pic.twitter.com/OYPIhrEHm0

COVID-19 initially hit Black Mississippians the hardest when it first arrived in the state. Since mid-2020, though, those trends have reversed, and white Mississippians now account for a disproportionate number of weekly deaths and cases. Mississippi State Health Officer Dr. Thomas Dobbs attributes the shift to Black and other non-white Mississippians doing a better job of following public health guidelines.

With the two latest child deaths, the total number of Mississippi children who have died of COVID-19 since the pandemic began has now tripled since July 25, when 16-year-old Jenna Lyn Jeansonne of Picayune died due to complications from the virus. 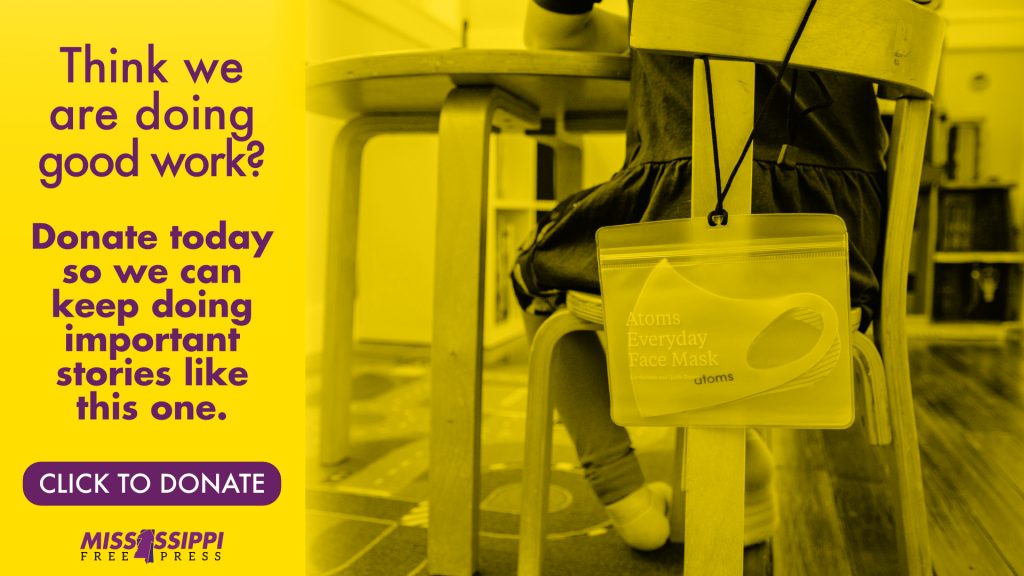 As schools reopened in August, Gov. Tate Reeves said during an Aug. 13 press conference that he had “no intention” to mandate masks in the state’s public schools this year, despite doing so last year. School mask mandates, he said, were no longer necessary because parents had since gained the option to vaccinate children age 12 and older. At the time, though, less than 15% of eligible children were vaccinated. Reeves also downplayed concerns about safety for vaccine-ineligible children younger than 12.

The next day, though, that number rose to five when 13-year-old Mkayla Robinson died just over a week after starting 8th grade at Raleigh Junior High School. Robinson, who was unvaccinated, had been in class and unaware of her illness as recently as three days before her death.

In the month-and-a-half since Gov. Reeves downplayed the dangers of COVID-19 in children younger than 12, at least two of the Mississippi children who have died of COVID-19 were in that vaccine-ineligible age group. MSDH confirmed that one child who died in late August was between the ages of 1 and 5, while another who died earlier this month was a baby less than a year old.

Among the 304 Mississippians between the ages of 40 and 49 who have died of COVID-19 in 2021, just 10 were vaccinated. Even among the oldest age group listed, those 65 and above, the unvaccinated account for more than 89% of deaths this year.

At least 9,588 Mississippians have died of COVID-19. Since August, Mississippi has surpassed early pandemic hotspots New York and New Jersey to claim the nation’s highest COVID-19 death rate since the pandemic began.

With your help, we can do even more important stories like this one.
Support the MFP
PrevPreviousGov. Tate Reeves Says Medical Marijuana Session “Sooner, Rather Than Later”
NextMayor vs. City Council: Jackson Garbage Dispute In Court Thursday As Contract EndsNext