During the 2020 campaign, then-candidate Joe Biden vowed that, as president, he would appoint a Black woman to the Supreme Court. The president reiterated that pledge in January when Justice Stephen Breyer announced his retirement.

Last month, Wicker told Mississippi radio host Paul Gallo that Biden’s pledge meant that whoever he picked would be a “beneficiary” of an affirmative action “quota,” drawing a rebuke from the White House, a story the Mississippi Free Press first reported. Today, he called “the confirmation of a justice to a lifetime appointment on the Supreme Court … a solemn responsibility that deserves the full engagement of the U.S. Senate.”

Wicker said today that he voted against confirming Jackson to the D.C. Circuit last year because of her views. Only three Republicans in the U.S. Senate voted to elevate her to her current position: Sen. Susan Collins of Maine; Sen. Lindsey Graham of South Carolina; and Sen. Lisa Murkowski of Alaska.

“That said, I expect the Senate will accord (Jackson) all the courtesy and respect that was not shown to Brett Kavanaugh, Clarence Thomas, Miguel Estrada and Janice Rogers Brown,” Wicker said today, listing off Republican nominees Democrats have blocked or attempted to block over the past three decades.

During Kavanaugh’s nomination fight in 2018, Christine Blasey Ford testified under oath before the U.S. Senate that he had once tried to rape her at a party. Similarly, in 1991, Anita Hill testified under oath that Thomas, a George H.W. Bush nominee, had subjected her to sexual harassment when she was his employee, which Thomas called “a high-tech lynching for uppity Blacks,” although Hill is also Black.. Despite the testimonies, partisan Republican majorities confirmed both men to the seats they currently occupy on the U.S. Supreme Court. Biden, who oversaw the judiciary committee at the time of the hearings, voted against Thomas.

Estrada and Brown were George W. Bush federal-court nominees whose nominations failed amid criticisms from Democratic senators that their views were too right-wing.

Before Biden announced Jackson as his pick, Wicker told Gallo in January that he feared the nominee would be more like Justice Sonia Sotomayor, an Obama appointee, and less like the outgoing white male justice Biden is replacing. 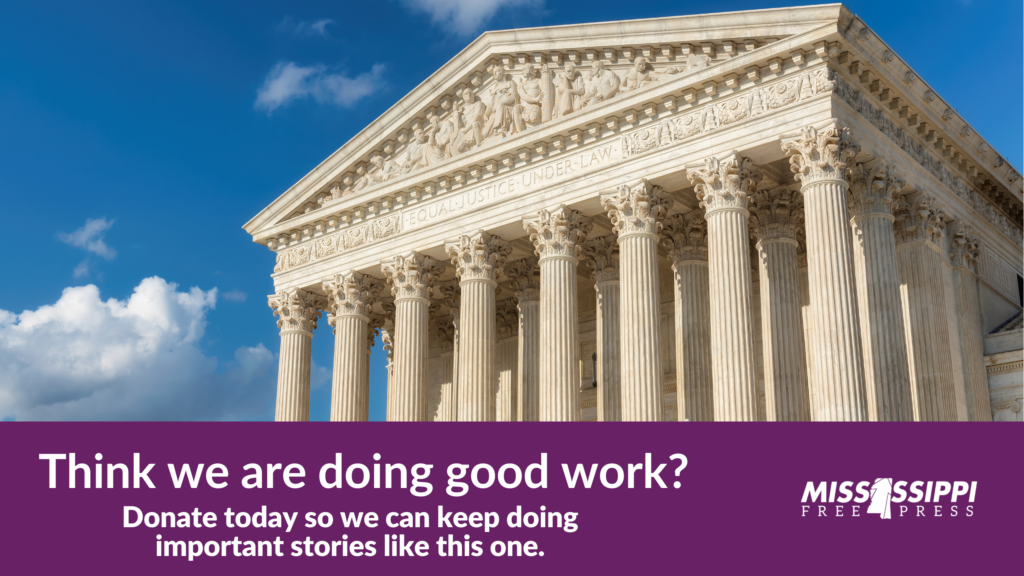 “We’re going to go from a nice, stately liberal to someone who’s probably more in the style of Sonia Sotomayor,” Wicker said. “… I hope it’s at least someone who will at least not misrepresent the facts. I think they will misinterpret the law.” He later told reporters he would “let that interview stand” when asked about his remarks.

Throughout her career, Judge Jackson, who grew up in Miami, Fla., has served as a federal appellate judge, a federal district court judge, a member of the U.S. Sentencing Commission and as a federal public defender.

In its announcement of her nomination this morning, the White House said that Jackson’s high school guidance counselor once told her that she should not see her sights “so high” when she revealed that she wanted to attend Harvard University. After graduating from Harvard Law School, she served as a clerk for Justice Breyer.

“As I have pursued this professional path, and if I’m fortunate enough to be confirmed as the next associate justice of the Supreme Court of the United States, I can only hope that my life and career, my love of this country and the Constitution, and my commitment to upholding the rule of law and the sacred principles upon which this great nation was founded, will inspire future generations of Americans,” Jackson said while speaking at the White House today.

Hyde-Smith Says No ‘Activists On The Bench’

“I congratulate Judge Jackson on being the first African American woman nominated to serve on the Supreme Court,” she said. “The advice and consent role of the U.S. Senate under the Constitution is a vital part of the incredibly important responsibility of filling a seat on the nation’s highest court, and I take this duty very seriously.

“I look forward to meeting Judge Jackson in person as part of a careful evaluation of her background, record and judicial philosophy. I believe Supreme Court justices must be wholly committed to faithfully upholding our Constitution and the laws of our nation, and should not be activists on the bench.”

In 2018, Hyde-Smith became the first woman to represent Mississippi in either chamber of Congress. This marks the third Supreme Court nomination since she joined the Senate. She previously voted to confirm Trump nominees Kavanaugh and Amy Coney Barrett. Since he joined the Senate in 2007, Wicker has voted to confirm all Republican Supreme Court nominees and against all Democratic nominees.

Trump’s Supreme Court appointees have shifted the court to the right. Their rulings have weakened protections under the Voting Rights Act. Wicker himself predicts that the court may soon end the use of affirmative action in college admissions. Court observers also believe Trump’s picks have paved the way for the court to overturn Roe v. Wade, the 1973 case that overturned state bans on abortion. The justices are set to rule on a Mississippi case challenging Roe v. Wade in June.

With your help, we can do even more important stories like this one.
Support the MFP
PrevPreviousLittle Bit Mozart, Little Bit Rock-’N’-Roll: Violinist Alexander Markov Performs in Tupelo
NextAmerica’s Cost of ‘Defending Freedom’ in Ukraine: Higher Food and Gas Prices, Increased Risk of RecessionNext