Mississippi Secretary of State Michael Watson says he may be a victim of “a hatchet job” after the Mississippi Free Press reported on his warnings against registering “uninformed” and “woke college students” to vote.

“So think about all those woke college and university students now who will automatically be registered to vote whether they wanted to or not. … You’ve got an uninformed citizen who may not be prepared and ready to vote. Automatically, it’s forced on them: ‘Hey, go make a choice.’ And our country’s going to pay for those choices,” the state’s top election official said in a March 26 televised interview on WLOX.

The remarks initially drew little notice, but gained widespread attention from national news outlets, including a Washington Post editorial, after this publication reported on them on April 6.

“I think that those comments were probably taken out of context in a hatchet job in the sense that our job is to make sure that every Mississippian who is a United States citizens, who is a legal resident of our state, has the ability to vote,” the Associated Press reported Watson telling reporters on Wednesday.

The secretary noted that his office registered 113,000 voters in 2020 and held voter-registration drives on college campuses. In an apparent effort to clarify his March 26 comments, Watson expounded on his ideas about informed voters.

“Really, the idea was, and what our country was founded on, is having an engaged citizenry who understand the issues, who want to play a role in the future of our country,” Watson said on Wednesday. “And then when you put this all in individuals who may not be, who don’t even know that they are registered to vote, who aren’t doing research, who aren’t interested in the future of our country, that is when the questions arise.”

In the country’s early days, though, only white male landowners, who tended to be much wealthier than the average citizen, were allowed to vote. White men did not gain near-universal suffrage until 1856. Though constitutional amendments technically granted suffrage to Black men in 1870 and all women in 1920, many southern states, including Mississippi, used a series of Jim Crow laws and literacy tests to effectively bar Black participation in voting.

In a Mississippi Free Press op-ed on Thursday, former Mississippi Gov. Ray Mabus described Watson’s remarks as “a throwback to the awful time of Jim Crow.”

“Under those laws and practices, Black Americans were systematically, ruthlessly, and often violently kept from voting to ensure the preservation of segregation and white supremacy. … One of the ways Black Mississippians were barred from voting during Jim Crow were the infamous ‘literacy tests.’ These tests had only one purpose: to keep Black Mississippians from casting a ballot, not to ensure that people were ‘informed,’” Mabus wrote.

“Mr. Watson tips his hand when he uses the term ‘woke.’ Woke started in the Black community to describe people who were aware of and acknowledged systemic racism. Now it is increasingly used to mock those who hold anti-racist views. Interesting, telling and exceedingly strange that he would not want those who are against racism to vote,” Mabus wrote.

During his session with the press on Wednesday, the secretary of state said that his issue is really with college professors with whom he disagrees with ideologically—not with the students.

“You’ve got these far-left, liberal professors who are really teaching our university and college students to hate our country,” the AP reported him saying.

Several professors spoke out today in an open letter to Watson published in the Mississippi Free Press, calling his comments about young people “demeaning.”

“Secretary Watson used a tired, political dog whistle to claim that “woke” students, whom he implies do not deserve to vote and might, therefore, improperly benefit from the For the People Act, a proposed federal law that would broaden accessibility to voting around the country,” five professors from Jackson State University, Millsaps College and the University of Southern Mississippi wrote yesterday.

His intended target was clearly more progressive voters on campuses across the state, while ignoring the fact that young people of all political persuasions attend our colleges and universities.”

A number of non-partisan voting-rights organizations have condemned Watson in recent weeks, including the League of Women Voters.

“When someone is elected to public office, they take an oath to ‘support and defend the Constitution of the United States,’ which of course includes the hard fought right of citizens to vote.”

“Particularly in Mississippi, with its long and painful history of Jim Crow laws that restricted the ability of Black people to vote, Secretary Watson’s use of racial dog-whistles like the words ‘woke’ and ‘uneducated’ to demonize young voters is all the more troubling,” Burns said.

“Young people and college students are the newest members of our self-governing democratic system, and our leaders should be doing everything they can to welcome and support them so that we can sustain a healthy and thriving nation. Without allowing and deeply encouraging youth participation in our elections, our democratic system will fail to properly represent all of its constituents.”

Burns noted that July 1, 2021, will mark a half century since the 1971 ratification of the 26th Amendment, which lowered the nationally mandated voting age from 21 to 18.

“At the time, the nation was deeply involved in the Vietnam War, and young people, frequently unable to vote, were active on both sides of the issue, protesting and serving,” he said. “On May 4, 1970, four students were killed at Kent State in Ohio protesting the war and a lack of voting rights. Just 11 days later, two more students were killed at Jackson State in Mississippi.”

When city and state police opened fire on the crowd of around 100 Black student protesters at JSU, they killed 21-year-old Phillip Lafayette Gibbs and 17-year-old James Earl Green.

“Secretary Watson’s flippant comments disrespect the tremendous loss of life on both sides of this issue, which catalyzed the movement for the 26th Amendment,” Burns said. “Our nation, and Secretary Watson, as the chief election official in Mississippi, should be striving to honor these sacrifices and uphold and expand these achievements, not roll them back.” 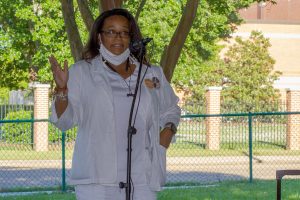 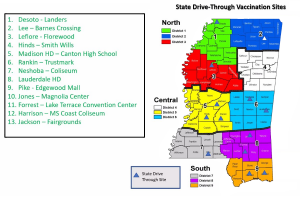 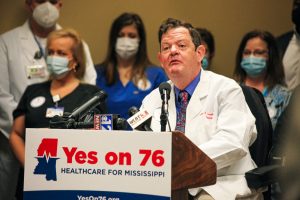