Racial Disparities in Vaccinations Continue in Mississippi As COVID-19 Declines

Positive signs are emerging in Mississippi’s fight against COVID-19, with a continued decline in case transmission and new hospitalizations paired with an increasingly effective vaccination program. But racial disparity in the delivery of the vaccine remains an issue the state has yet to solve.

Mississippi is gearing up to receive more vaccine than previously anticipated, with 45,000 doses allocated for next week’s shipment, which is significantly higher than the expected 37,000 baseline. So far, Mississippi has delivered over a quarter of a million shots of vaccine—mostly first doses. 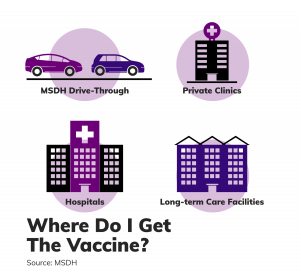 The governor also announced that an additional federal partnership program with Walmart would receive a large portion of those new doses, with 4,000 to 5,000 going to Walmart pharmacies for direct delivery to the public.

Overall, the seven-day rolling average of new cases of COVID-19 has slumped to 1,419, down from an all-time peak of over 2,400 in early January. Hospitalizations, too, are on a steep downward trend, now down to 898 after peaking last month at over 1,444 confirmed infections in the state’s hospitals.

Deaths, however, remain high as the final lagging indicator of the severity of the pandemic in the state. MSDH reported 76 new fatalities from COVID-19 today.

Mississippi’s COVID-19 vaccinations remain unequally distributed, with today’s vaccination report showing that Black Mississippians have received only 17% of the total vaccinations delivered, significantly less than their share of the population, which is close to 40%.

Gov. Reeves suggested that a cultural distrust was partly to blame for low vaccination rates. “It’s not just a supply issue in those areas,” he said in a Feb. 2 press event. “There’s more of a natural skepticism to get the vaccine among our African American population.”

That “natural” skepticism comes after a long and sordid history of medical racism in Mississippi and the U.S. more broadly. As Debra Furr-Holden wrote in this piece in the Mississippi Free Press, “Historical wrongs, like the Tuskegee Syphilis Experiments, which ended in 1972, have played a major role in contributing to Black mistrust of the health care system.”

Nor are all medical disparities historical. As State Health Officer Dr. Thomas Dobbs acknowledged in an interview with the Jackson Free Press, existing racial inequity in health-care access and outcomes, as well as the economic realities of whose labor leaves them most exposed to infection, caused the early statistics that showed significantly more viral spread and deaths from COVID-19.

Dobbs has attempted to address issues of vaccine availability and skepticism at the same time, hosting a public discussion with Black religious leadership at New Hope Baptist Church on Feb. 1. There, he acknowledged that faith in the vaccine was proving easier to find than vaccine supply. “We … see and believe that the access issue is a more important problem than the trust issue,” Dobbs said.

“We’re going to be progressively addressing (both),” Dobbs told the Mississippi Free Press at today’s press event, adding that the MSDH’s allocations to less-vaccinated areas would quickly become more “aggressive.”

Good news is emerging about late-coming vaccine candidates, including several single-shot options. The single doses, which are easier to store and deliver, show powerful protection against the virus—especially against hospitalizations and deaths from COVID-19.

Still, Pfizer and Moderna’s two-dose mRNA formulations remain the gold standard at preventing any visible infections at all. “We’re going to see variable efficacy with the Johnson and Johnson and AstraZeneca vaccines,” Dobbs acknowledged. 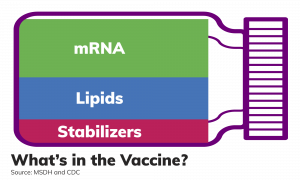 While the easier delivery of the new vaccines could provide a solution for poorly vaccinated populations, MSDH is deeply concerned with the threat of the vaccine being distributed in “tiers.”

“We certainly don’t want people in disparity situations thinking they’re getting (worse) vaccines,” said Dobbs. Still, he was quick to acknowledge that the single-shot vaccines were extremely effective. “If we’d gotten this back in December we would’ve been doing cartwheels,” he said.

With your help, we can do even more important stories like this one.
Support the MFP
PrevPreviousSeeking Causes, Embracing Solutions and Finding Joy During Black History Month
NextDrug Overdose Deaths Explode in Mississippi and Nation. Some Experts Blame COVID-19.Next