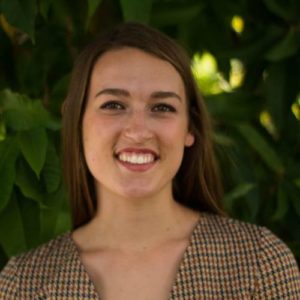 Calandra Davis’ work as a policy analyst at the Hope Policy Institute in Jackson focuses on topics including affordable housing, banking access and debt, issues she also encounters as an activist. The organization is the policy arm of Hope Credit Union, which helps bring financial and banking services to the Deep South’s low-wealth communities. She’s also a community activist with the Poor People’s Campaign and other local organizing groups in Jackson, where she lives.

Facing South, as part of The Stakes 2020,  spoke with Davis about how federal elections lead to regulatory changes that ripple out and impact Mississippians living in poverty. They also talked about the disproportionate impact COVID-19 has had on Black and brown Mississippians, and how the pandemic has clarified the intersectionality at the heart of the injustices affecting communities across the Deep South. The  conversation has been edited for length and clarity.

Elections and policy are, of course, closely tied because the people or the administrations we have in office are usually the decision-makers. I believe that we want to have people in office who understand the impact of the decisions that they’re making, and who understand the communities that will be impacted the most. So if you have someone in office who doesn’t fully understand what it means to need quality and affordable housing, or someone who has never had to use government medical insurance, then it’s going to be hard for them to make policy that includes everyone.

Are there specific elections that could have an impact on the policy issues you’ve been working on in Mississippi?

There are some federal policies or regulations that are (being changed) right now that will disproportionately affect Mississippians. One thing that we have been looking at at Hope Policy Institute is the Office of the Comptroller of Currency’s ruling around predatory lending. This is a federal ruling that would allow online predatory lenders into the state, and it impacts mostly poor Mississippians. Something else that’s really important is the disparate impact ruling (a recently adopted Department of Housing and Urban Development, or HUD, policy that makes it harder to challenge systemic racism by housing providers). Again this is on the federal level, but it trickles down to Mississippians, because Mississippi is one of the top states with the number of people who are facing evictions right now. Recently the Disparate Impact Rule was stripped from the Fair Housing Act, which then makes it harder for us to have affordable housing within the state.

How has COVID-19 affected the ability of people who might have lost jobs or income? How has it impacted their ability to access housing and health care?

COVID-19 is a public-health crisis. But it’s not just a public-health crisis. COVID-19 is pulling back the layers for us to see that many Americans were already in an economic crisis. Particularly Black and brown folks were already experiencing the economic crisis at disproportionate levels to anyone else. Already in Mississippi, we have rural counties that do not have hospitals. We do not currently have Medicaid expansion, and we have one of the highest numbers of uninsured residents. This election affects all of that.

COVID-19 has only heightened the health disparities that we see. COVID-19 has heightened the economic disparities as well, putting many people in a bind where they are having to choose their health over employment, or having to decide if they will be able to make next month’s rent payment. Even with federal regulations in place right now where evictions have been halted until the end of the year, rent payments are starting to pile up. So people will still be in a bind when it is time to make those payments. We really need better legislation all around when it comes to housing and to health care, and we need to make sure we are electing officials who understand that and can put that legislation in place.

To go back to the federal rule you mentioned earlier, the Fair Housing rule—what are the specific impacts that those federal rule changes will have on the state?

What I mentioned earlier was HUD’s implementation of the Fair Housing Act’s Disparate Impact Standards. The Fair Housing rollbacks have rigged economic opportunity in the Deep South.

On Labor Day weekend, HUD finalized some changes that stripped away critical elements of the law that protected people from facing discrimination in the housing market—the key enforcement to the Fair Housing Act of 1968. That’s what we really wanted to protect, what our decision-makers, our elected officials could have protected. And HUD shut that down just a month ago.

This is where the grassroots advocacy work comes into play, because for those of us who are on the ground actually seeing folks lose housing, COVID-19 has kind of undone that even more. Housing isn’t the human right we thought it was, and Black and brown folks are getting pushed out of housing even more so, and our country’s history of discrimination in the housing market and in those practices still persists today. The federal government’s role in facilitating racial discrimination (in) housing practices is really well-documented, and it’s excluded generations of Black families from homeownership while the government specifically promotes opportunities for white families.

And again, this is not just the decision of local leaders, and not just state leaders, but the decision of our elected officials on the federal level and also of our Senate leaders. To throw in some numbers to tie this all together: In Mississippi, the (mortgage loan) denial rate for Black residents earning over $150,000 is higher than the denial rate of white residents earning between $30,000 and $50,000. Black residents who were making over six figures still were denied homes at a higher rate than white residents making between $30,000 and $50,000 annually. That’s why it is so important, when we talk about equity in Mississippi, when we talk about dividend wealth, when we talk about moving the state forward, it’s important that these protections get to stay in place. It’s important that our policies and laws benefit everyone and are inclusive to everyone and also take into consideration the impacts.

Yeah, definitely so. I think it all ties together. It all intersects. We cannot address one problem without it intersecting with another. So while we’re talking housing, Medicaid expansion is also important, education, all of it intersects together. You’re absolutely right.

Mississippi is considered a conservative state. So when we look at other conservative states, voters have expanded Medicaid. I believe the reason is that people understand the importance of health care. Now more than ever, COVID-19 has taught us the importance of everyone having access to affordable health care. Our voters here in Mississippi, we have to take a stand, and we have to really come together as a state to make sure that we are supporting everyone by expanding Medicaid. It’s not a partisan issue at this point because COVID-19 is not a partisan issue. COVID-19 did not only affect people of certain political backgrounds—it’s something that affected all of us in many ways. As numbers are starting to rise again, it’s important that we keep health care at the forefront of our political discussions, and really it’s in the voter’s hands to make sure we’re providing that health care to everyone.

Is there anything else you wanted to talk about?

As states are beginning to open back up, as elected officials are discussing opening states up, are removing mask mandates, I think it’s important to remember that we are still in the midst of COVID-19. As the numbers are starting to rise, we also are seeing that the economic crisis is not going anywhere. While some people are able to work, some are still out of work but unemployment benefits have been cut. We talk about affordable health care or Medicaid expansion, and one of the highest debts that people carry is medical debt. Even before COVID-19, Mississippians were far down in medical debt, a fact that has prevented many Mississippians from being able to access credit, from being able to make the bills on time, paying rent or mortgage.

Since COVID, debt has only accumulated, and one of the businesses that has not been on lockdown has been debt collectors. They are still harassing, for lack of a better word, everyday people who are really only trying to get by during this time.

So again, it all ties together. When we’re talking about economic justice, and we’re talking about the need for legislation that provides more stimulus payment, that also ties into the lack of legislation providing affordable health care for everyone. And then it leaves those who are most impacted behind. It leaves those people without the health care they need, it leaves them without the money they need for shelter or for any other essential items, and it is on our elected officials to change that. That again is why this election cycle is so important, because I feel like we do not currently have people in office who understand that and have uplifted the needs of those who are most impacted.

This piece was published in cooperation with Facing South, an online magazine and weekly email update of the Institute for Southern Studies that features investigative reporting and in-depth analysis of trends across the South.

This is the fourth installment in The Stakes 2020, a series of interviews with community leaders, organizers and advocates highlighting what’s at stake for southern communities during this year’s election. We’re going beyond the candidates on the ballot to dig into how elections influence the policies, budgets , and regulations that affect sSoutherners’ everyday lives. Find the rest of the interviews here.

Olivia Paschal is a staff reporter with Facing South whose work focuses on democracy, money in politics, the census and agriculture. She previously worked at The Atlantic and was a Facing South intern in the summer of 2017. Her reporting has also appeared in Scalawag, Southerly and Civil Eats, among other outlets. Olivia holds a bachelor's degree in history from Yale University.
All Posts
Republish This Story

With your help, we can do even more important stories like this one.
Support the MFP
PrevPreviousHow To Talk About Climate Change Without the Distraction of Privilege
NextOfficials Moved Polling Places for 18,630 Mississippi Voters Ahead of Election, Secretary of State SaysNext