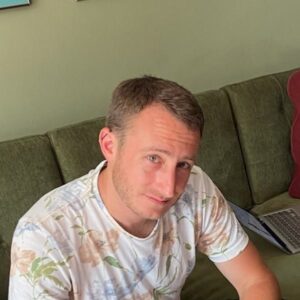 On May 30, 2020, I hopped in my car with a few cans of spray paint and a boxcutter and drove a little over two hours from my then-home in Leland to Oxford, Miss. Before I even arrived at the circle on campus where an enormous Confederate statue used to stand, fear overcame me. It was now or never.

Depending on whom you ask, I defaced, desecrated, vandalized or branded the statue with the phrase “Spiritual Genocide.” It was the culmination of an idea that had been germinating for months, if not years, and it was not entirely my own. However, I’m not sure if others would feel OK with me sharing this—some don’t even know me—and in any event, I take full responsibility for the decision and action.

The execution was poor, selfish and inconsiderate. Many people had been working tirelessly on the removal of that statue for some time, and I did not consult with them. Arielle Hudson, who organized my bail fund, essentially saved my life. I spent about two days, maybe a little less, in jail, but it could have been much longer.

I was initially charged with a felony, but it was eventually reduced to a misdemeanor. Ultimately, the powers-that-be decided to call what I did “malicious mischief.” I was given the opportunity to plead guilty, or even no contest, and be assured that my record would be wiped clean after a year.

This may have just been a formality, but words matter. Jail terrifies me, as does the idea that someone might seek retribution against me personally. I am a person of privilege, both racially and economically, and it is possible, if not likely, that the justice system was kinder to me than it would have been to others. Many think I was being foolish by not taking the opportunity to face the mildest repercussions possible.

Ultimately, though, I decided that what I did was neither malicious nor mischievous. I don’t believe in a society where everyone achieves their political goals by spray-painting words on edifices. But this line of thinking misses the point entirely.

What I hope people may come to see is that tributes to the Confederacy are symbols of terror. This was the institution that fought to keep Black people enslaved, a system more twisted and depraved than most are capable of imagining. If white people don’t see that, I don’t think that we can fully see Black people, or even ourselves and the incredible trauma of our history that leaks into the present.

One such statue is still outside the courthouse on the Oxford square—despite the efforts of several community members to have it removed—and the location of this one is even more troubling. Black families in our communities never received justice for what was done to them for hundreds of years, including lynchings, and many of the punishments doled out in that very building are a result of our embarrassingly inequitable society.

I was fortunate to not face serious consequences for my actions; however, I beg that you see the consequences of the Confederacy and of continuing to glorify its cause.

The statues are merely symbols, and perhaps devoting so much energy to them takes away from the concrete things that really matter, such as police brutality, housing discrimination and overall crushing poverty. I am one person who believes that it’s all connected.

Hopefully we become more likely to create policies and a society that is founded in equity and justice and choose to see people and honor the truth.

Note: Arielle Hudson, mentioned in the piece above, is on the advisory board of the Mississippi Free Press.

This MFP Voices essay does not necessarily represent the views of the Mississippi Free Press, its staff or board members. To submit an opinion for the MFP Voices section, send up to 1,200 words and sources fact-checking the included information [email protected] We welcome a wide variety of viewpoints.

Zach Borenstein currently works as a tutor while pursuing opportunities as a singer-songwriter. He/they taught middle and high school math for four years. Prior to that, Zach worked as a case manager in New York City and as a Peace Corps Volunteer in the town of Palestina, Ecuador. Zach currently lives in Memphis, Tenn., and enjoys running and spending time with his cat, Sal.
All Posts

With your help, we can do even more important stories like this one.
Support the MFP
PrevPreviousWith No Burn Center Left In Mississippi, UMMC Faces Questions About Past Efforts
NextShuwaski Young Launches Bid For Mississippi Secretary of State, Vows Easier VotingNext