We Just Amped Up Our Fight to Attend Party Caucuses at the Capitol. Here’s Why.

So now, with the legal representation of Rob McDuff, the director of the George Riley Impact Litigation Initiative at the Mississippi Center for Justice, we are fighting back. Yesterday, attorney McDuff filed a supplemental complaint to a short one MFP reporter Nick Judin then filed with the Mississippi Ethics Commission after the House GOP Caucus told Nick he would have to leave a meeting filled with Republican legislators in the Capitol.

After Nick fired off his initial two-page PDF to Director Tom Hood at the commission, we learned more about how the complaint process works and that having legal representation might help bring more transparency to Mississippi policy-making by making clear arguments. (I know, duh, but we’re journalists, not attorneys).

Long story short, I asked Rob McDuff, an attorney with a long and stellar history of being on the side of fighting for the rights of everyday Mississippians, to represent us. We quickly joined forces with him and the Mississippi Center for Justice, and he filed our supplemental complaint late yesterday.

To us, the answer is clear: Caucus meetings where policy is discussed and certainly where a majority of the entire House is present must be open to the public and to media, whether they think we’re sympathetic enough or not. This must apply to both chambers and both parties equally, and it must be consistent. Sunshine must be non-negotiable and beyond partisanship.

Speaker Gunn clearly believes the House members who belong to his party—the majority in that chamber—should be able to meet, discuss and maybe even reach a collective decision on a potential policy while barricaded in a room inside the Mississippi Capitol—and all outside public view. That means they can gather up in one or another ornate room there with no prior announcement to the public, closing the door and stationing staffers at the front to be sure only official party members can enter, and turning away all others.

That’s exactly what happened, in fact, on March 14, 2022, when Mississippi Free Press reporter Nick Judin walked into the dimly lit Capitol Room 113 for the House GOP Caucus meeting. Nick’s audacity apparently shocked and rattled those inside who have been used to discussing policy outside the public view for years now.

It’s an open secret that closed House Caucus meetings are a regular thing, of course; Associated Press reporter Jeff Amy reported on it back in early 2017 in a piece called “Analysis: House GOP Maintains Unity Through Caucus Meetings.”

Inside Room 113, Nick was told he would have to leave with Gunn himself calling out “No!” when Nick asked the room politely if the meeting was required to be open to the public and press under the Open Meetings Act. Several others also called out “no!”—and Nick left.

Let’s be honest: Nick didn’t expect to be allowed to stay in that Monday afternoon Caucus meeting. He and I had discussed the closed Caucus problem weeks before, deciding to take a stand for transparency over meetings a majority of the House openly attended, filled with apparent policy discussions that we, as well as our attorney now, believe strongly violate the intent of the Open Meetings Act.

Nick and I fear that the Caucuses may be about deciding how those representatives are going to vote in advance before cross-party floor debate, perhaps even requiring approval of their leaders. The Caucuses may well be limiting individual Republican lawmakers’ free will to serve their own constituents on the House floor.

Either way, there is nothing transparent or “open” about these meetings.

No Talking to the Media

Nick and I knew that if we had a chance of doing anything about the closed meetings, we had to be barred from one of them, which also means you can then file a complaint with the Ethics Commission. That is the necessary first step in bringing transparency to dimly lit corners.

First, weeks before the Room 113 confab, Nick left a message at Gunn’s office asking to attend the Caucus meetings, on Feb. 1, 2022. No response whatsoever.

That was no surprise because another problem at the Legislature that started in earnest in the early 2000s was a kind of partisan iron fist over lawmakers in the form of apparent dicta in both Houses that prevent most from talking to Mississippi journalists. That is, unless we’re of the doting partisan variety that legislators know will spin and frame their words just as they want them.

That’s clearly not us—we do not bow before partisanship of any stripe—so this award-winning, statewide, inclusive, women-led newsroom routinely gets ignored when we request interviews, or maybe we get a short, carefully emailed statement instead. But we don’t get to actually ask real questions, and then follow-ups, of public servants unless we get lucky at a press conference. The inability to ask real questions hurts the public’s right to know and understand public servants’ motivations, reasoning and ultimate votes. 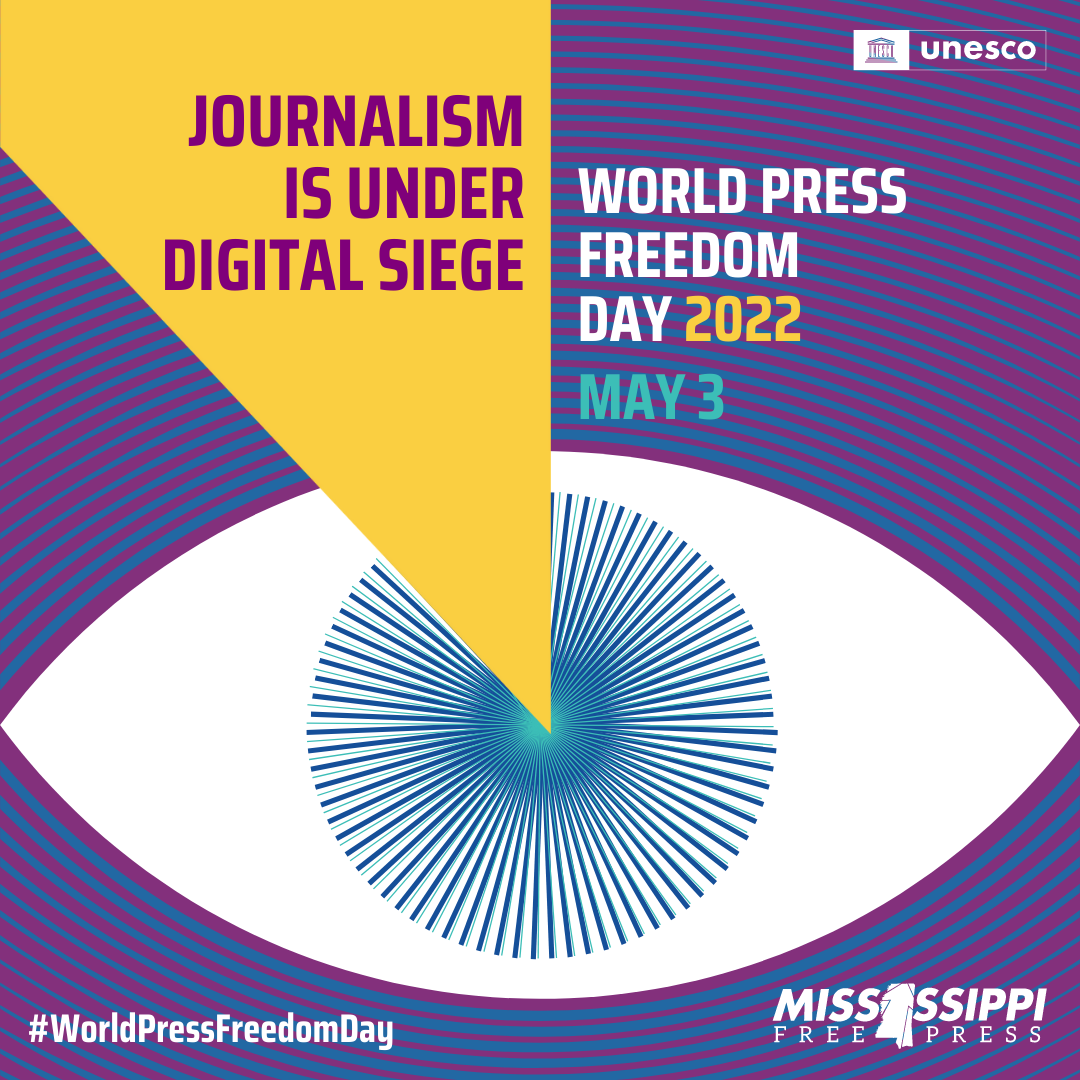 That is, my reporting team is frozen out because we don’t ask press-release questions or send them in advance so they can decide whether they approve or not. This clampdown on transparency is no way to serve Mississippians.

‘Well, That’s The Way They Do’

Neither is ignoring the clampdowns. Any honest Mississippian knows the “well, that’s the way they do” shrug that we can all be guilty of here, no matter how hard we fight for real solutions for our state and our people. I get it: It’s easy to lose hope, and I’m typing this on the day that one of the two publications I’ve helped run has broken the news now for the fourth time that a Mississippi governor has declared Confederate Heritage Month. Sure, we all get frustrated and, to be honest, we can lose the urge to fight prevalent practices like blocking transparency, which happens from the City of Jackson to the Mississippi Legislature and across party lines.

But the fight matters. I was talking to a couple of women on our nonprofit board who remember a time back when powerful men would gather in men’s rooms, or even in parked cars outside the Legislature, to make decisions, and then tell the women how to vote. We’ve made at least some progress beyond those days because people, including journalists and our lawyers, decided to fight back for transparency and public ethics.

Sure, those fighters for transparency and justice could’ve shrugged and said, “Mississippi will never change.” Hunted and abused civil-rights workers could’ve done the same thing. But when you love a place and her people enough, it is despite the flaws, and it transcends hopelessness. You must decide to take a stand and fight for what’s right.

And what’s right in this case is that the Mississippi House majority should debate and decide policy in full view of Mississippi’s people and its press corps. Wish us luck.

Founding Editor Donna Ladd is a writer, journalist and editor from Philadelphia, Miss., a graduate of Mississippi State University and later the Columbia Graduate School of Journalism, where she was an alumni award recipient in 2021. She writes about racism/whiteness, poverty, gender, violence and the criminal-justice system. She contributes long-form features and essays to The Guardian, and was the co-founder and editor-in-chief of the Jackson Free Press. She co-founded the statewide nonprofit Mississippi Free Press with Kimberly Griffin in March 2020. Read more at donnaladd.com, follow her on Twitter at @donnerkay and email her story tips to [email protected]
All Posts

With your help, we can do even more important stories like this one.
Support the MFP
PrevPreviousWorking Together Jackson: City Leaders, Put Your Grievances Aside. Approve A Garbage Contract.
NextFamily, Advocates Seek Freedom for 28-Year-Old Woman Facing Illness Behind BarsNext