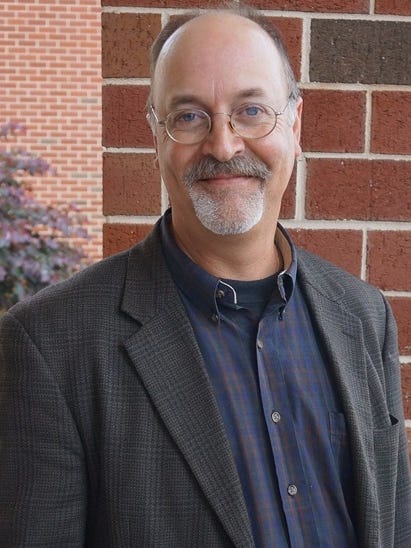 Gov. Tate Reeves is picking public fights with President Joe Biden to distract the people from his utter failure to properly manage the reopening of schools during the delta wave.

Reeves seeks to distract Mississippians from the consequences of his refusal to enact a statewide school mask mandate. The fact is, our governor failed to protect our children when they needed it the most.

Tate Reeves’ cruel failure constitutes a kind of child abuse. It’s reckless endangerment of the most vulnerable right now—our children—100% of whom under 12 cannot be vaccinated. This is nearly all children in elementary and middle schools. Shame on him.

Do not let Gov. Reeves distract you from the hard truth: If your child caught COVID or had to be quarantined from exposure to the virus in the first six weeks of school, you’d only have Tate Reeves to blame.

Forcing our children to congregate in class, in person without protective masking (and against medical advice) caused a demonstrable surge in pediatric infections and infections of K-12 teachers and staff. In November 2020, an elementary-school teacher in her 30s in DeSoto County caught COVID, likely from her students, and died. Just this past August, a 13-year-old girl in Smith County caught COVID in the first days of school, at school, and died. Also, a toddler or perhaps a child in pre-K (aged 1-5) contracted COVID and died.

Blood on the Hands of Tate Reeves

Here it is late September 2021, and Mississippi has the highest per capita COVID-19 death rate in the entire country. If Mississippi were a country, it would have the second-highest COVID death rate in the entire world, behind Peru. The blood of people we’ve lost is on the hands of Gov. Reeves—not that he seems to care, as he continues to downplay the severity of the state’s COVID-19 mortality rate.

On the week ending Aug. 15—or two weeks after most K-12 schools reopened with  many with no mask mandate)—Mississippi actually had the highest COVID contagion rate in the entire world.

Today, 20 Mississippi school districts, including the single largest district (DeSoto) with more than 34,000 students, are forcing students to attend classes in person without wearing a mask. This is highly irresponsible, yet has the governor’s blessing. 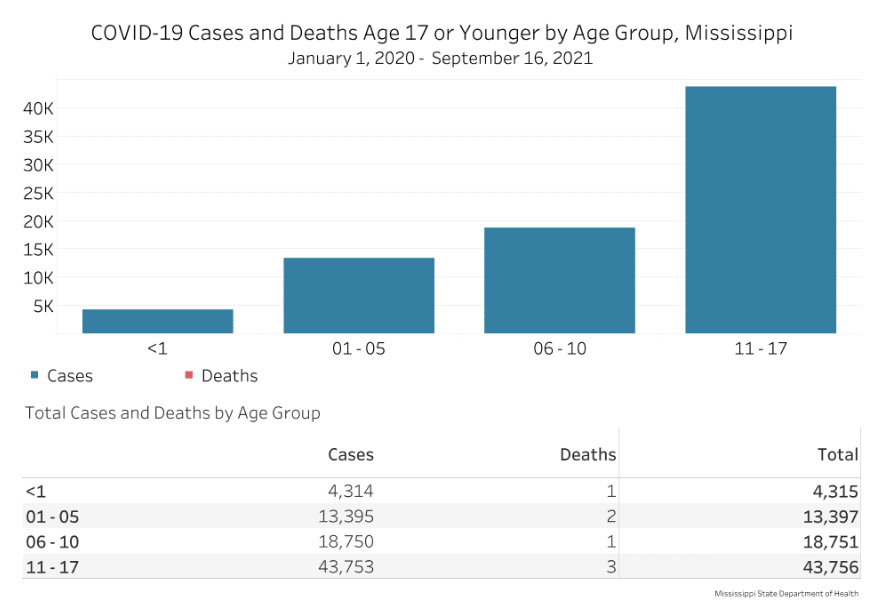 Tate Reeves’ failure to do anything to help protect our children needlessly infected thousands of students and several thousand educators. By Sept. 10, more than 20,500 children and 4,100 teachers tested positive since Aug. 1. More than 98,000 children had their schooling disrupted because they had to quarantine for possible exposure, and 5,000 educators couldn’t teach because they, too, had to quarantine. This COVID wave in our public schools is a moral atrocity.

These are the facts that Mr. Reeves hopes to distract you from knowing. He actively  encouraged so-called “mask optional” K-12 policies, even as the delta variant wave peaked, and schools were starting anyway. And now he seeks to distract you with political theater. As President Biden recently said, Tate Reeves is “playing politics of the worst sort.” Mississippians have the sense to see through what our do-nothing governor is up to. Don’t be fooled. Do, however, remember. 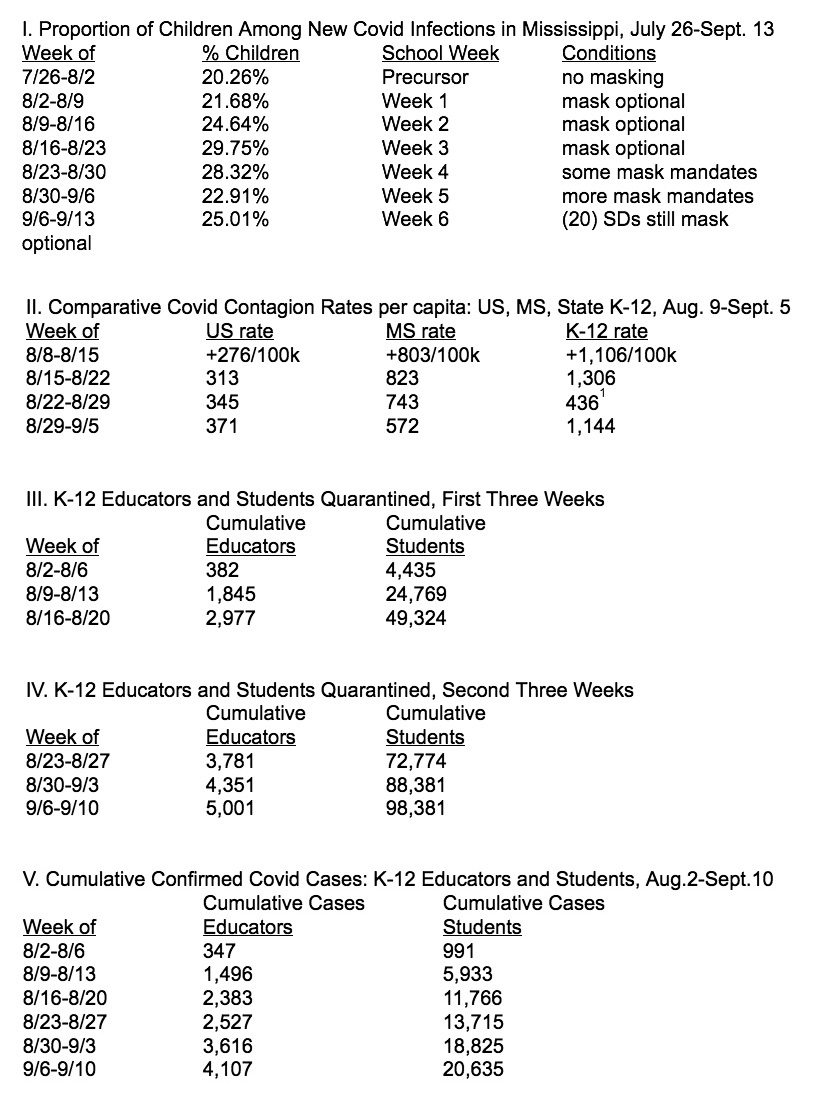 It is no accident that the proportion of children among new confirmed COVID infections rose dramatically in the first three weeks of fully open schools. As well, even as the statewide contagion rate began to decline in the last week or so of August, the contagion rate for K-12 students remained extremely high, or twice the rate of the state.

As we have seen throughout this pandemic, half-measures fail, and by the time rectifying decisions are made, it is mostly too late. The margin for error in COVID-19 is extremely thin. This is especially true for the hyper transmissible delta variant.

By the end of the first six-week grading period in Mississippi schools this fall, one in five K-12 public-school students (22%), and one in six teachers (16%), could not learn or teach for two school weeks during their required 10-day quarantine. Last school year Gov. Reeves mandated masks, and we learned that universal in-school masking largely works.

This time, entirely for political reasons, Mr. Reeves refuses to do what we know works. Instead, he callously refused to mandate masks, and thereby encouraged the lack of their use. In doing so, he cruelly and recklessly endangered our children. The result is soaring infections in the state’s public schools.

By the end of the new year’s sixth week, one in eight teachers and one in 20 students in Mississippi tested positive for COVID. Mr. Reeves’ failure of leadership directly contributed to 1,228 school-based outbreaks.

Today, more than 102,000 children are forced to go to schools where practically no one wears protective facial coverings. This is ridiculous.

Twenty school districts, from DeSoto to Harrison County (13,666 students) and Jackson County (8,765), to Lauderdale County and Meridian Public Schools (10,620 combined), to Lee County (6,389) still do not require facial coverings even as they mandate in-person instruction. Fully 25% of the 20 biggest districts continue to recklessly endanger children by discouraging the only mitigation measure available for children too young to get the vaccine. The sad reality is that many of those children will instead get the virus. Like I said, child abuse.

And the Crisis Lags On

All this just lags on as our state’s low vaccination rate and the delta variant continues to generate new infections daily, surpassing the peak of the Winter Wave in January 2021 (before delta). The delta variant wave is not over. Why is Gov. Reeves acting like it is?

Apparently, Reeves has been told by his Washington, D.C.-based political consultants that the best way to distract the people of Mississippi from his latest COVID debacle is to pick fights with President Biden. Let us remember, however, that if not for the timely federal intervention last month rescuing our state’s medical system from collapsing, it would have collapsed. Where do you think all those tens of thousands of life-saving monoclonal antibody (mAB) treatments came from? Even as Mississippi leads the nation in COVID deaths, it also leads the U.S. in use of mAB treatments.

Instead of attacking President Biden for his efforts to get people vaccinated, Tate Reeves ought to be grateful that we have a president who puts basic human decency above rank political calculation. If only our do-nothing, anti-masking, vaccine-hesitant, child-abusing governor would deign to do the same.

Douglas B. Chambers, Ph.D., is an associate professor of history at the University of Southern Mississippi, where he has taught since 1999. He is the author of several books and over 20 scholarly essays, and is a former executive editor of the Southern Quarterly (2005-2011). In 2017 the Mississippi Historical Society recognized his research with an Award of Merit. He has been following COVID-19 in Mississippi closely since March 11, 2020. The opinions expressed in this essay in no way represent USM, its administration, faculty, staff or students.
All Posts

With your help, we can do even more important stories like this one.
Support the MFP
PrevPreviousDr. Hilliard Lackey Paves Path to College for High Schoolers in Marks, Miss.
NextDue to Garbage Contract Dispute, Environmental Crisis Looms in the City of JacksonNext