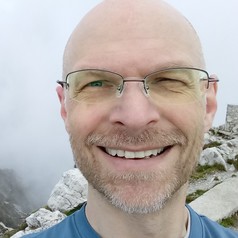 Vaccine refusal is a major reason COVID-19 infections have continued to surge in the U.S.

Safe and effective vaccines have been available for months, but as of mid-September 2021, only 65% of eligible American adults were fully vaccinated. In many areas, a majority of eligible adults haven’t taken advantage of the opportunity to get vaccinated.

In the U.S., polling on intent to get vaccinated shows a massive political divide. Counties that went for Joe Biden in the 2020 presidential election show higher vaccination rates than counties that went for Donald Trump. Attendees at the Conservative Political Action Committee’s summer meeting cheered the fact that the U.S. didn’t meet Biden’s July 4 vaccination goals for the country.

Politically motivated denial of COVID-19 vaccine effectiveness tracks with a dramatic politicization of trust in science itself. In a survey conducted in June and July, Gallup found that the percentage of Republicans expressing a “great deal” or “quite a lot of” trust in science is down, shockingly, from 72% in 1975 to only 45% today. Over the same period, confidence in science among Democrats is up from 67% to 79%.

Scientific institutions have never been perfect, but overall they have a tremendous track record of success—both in basic research and in applied sciences like epidemiology and immunology. The general public accepts without much complaint the expert opinion on, say, antibiotics, radio waves, orbital mechanics or electrical conductivity. Evidently, people are satisfied with applied science in almost all walks of life.

So why is confidence in science so malleable, and what does a person’s political orientation have to do with it? 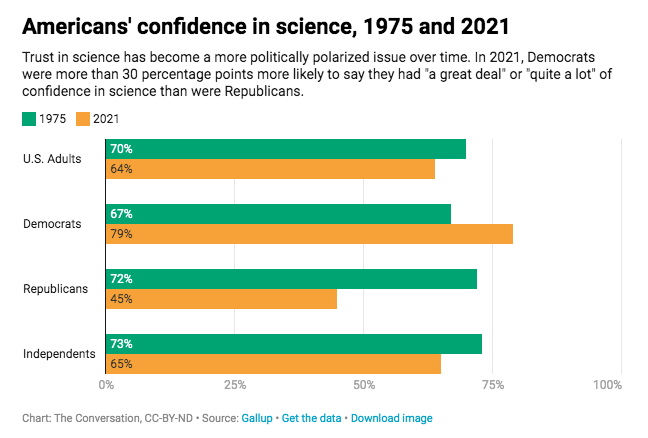 The rejection of scientific expertise with regard to COVID-19 vaccines appears to be standing in for something else. As a philosopher who has studied science denial, I suggest that this “something else” includes factors like distrust in public institutions and perceived threats to one’s cultural identity.

Ideologies That Mesh With Science Denial

Identifying as a Republican is very strongly associated with embracing central tenets of conservative ideology. A 2021 public-opinion study confirms that endorsement of conservative political ideology is currently the dominant predictor of anti-science attitudes.

Another recent study of anti-science attitudes identifies several tendencies particularly associated with conservative ideology. People who hold anti-science beliefs tend to be sympathetic toward right-wing authoritarianism—that is, they are conformists who defer to selected authority figures and who are willing to act aggressively in the name of those figures.

They also tend to support group-based hierarchy, with “superior” groups dominating “inferior” groups. Political psychologists call this “social dominance orientation” and see it in, for example, attitudes about racial or gender equality.

Indeed, social scientists looking at the causes of science denial have increasingly narrowed in on two contributing causes. Certain personality traits, including comfort with existing social and cultural hierarchies and a predilection for authoritarianism, go along with a skepticism for science. So do closely related aspects of identity, such as identification with a dominant social group like white evangelical Christians.

Conservative traditionalists from the historically dominant white Christian demographic in the U.S. have had the most reason to feel threatened by science. Evolution by natural selection is threatening to many doctrinal religious traditionalists. Climate science threatens the economic status quo that conservatives seek to conserve. The whole concept of a public-health mandate runs counter to the “small government” individualism of political conservatives.

Further, because COVID-19 has been starkly politicized since the beginning of the pandemic, public-health measures have become directly associated with the political left. Rejection of such measures has consequently become a signal of political and cultural identity.

Other recent studies on science denial have shown that people who don’t have a lot of confidence in the honesty and reliability of others, as well as in social institutions like government, academia and media, tend to deny the dangers of COVID-19. Low social trust tends to track with conservative political orientation—in particular, with support for Trump. His supporters are much more likely to say that scientific inquiry is driven by political considerations.

Grasping For A Sense of Control

Increasing economic inequality and racial and ethnic diversification are also part of the science denialism mix.

One school of thought in psychology, called compensatory control theory, holds that many social phenomena—including ideological science denial—stem from the basic human need for a sense of control over one’s environment and life outcomes. According to this theory, perceived threats to one’s sense of personal control can motivate denial of scientific consensus. The idea is that due to a combination of economic insecurity, demographic changes and the perceived erosion of cultural norms favoring whites, some people feel an existential threat to the white supremacy they’ve long benefited from—which in turn spurs them to deny government warnings about the dangers of COVID-19.

I believe this compulsive defensiveness plays a big part in the phenomenon of science denial, once trusted elites like politicians or news media hosts trigger the inclination to oppose some particular science-based public policy. You can’t control the coronavirus—or inequality, or a changing culture—but you can control whether you take the vaccine or wear a mask. This sense of control is implicitly, but powerfully attractive on a deep, emotional level.

The need for control may also explain an attraction to politicians or media figures who promise to give you your power back by endorsing unproven, alternative home remedies, such as ivermectin.

As I discuss in my book, “The Truth About Denial,” I think that science denial, including COVID-19 vaccine denial, is probably best seen as the result of vicious feedback loops. Factors like economic pain, white Christian identity and low social trust play off one another in populations experiencing relative social and informational isolation. This denialism can take hold more easily in people who have chosen to limit their experiences to relatively homogeneous geographic areas, social contexts and news media environments.

In the short run, the failure of a society to vaccinate enough people to get COVID-19 under control will dramatically change life for everyone for years to come. The larger issue is the way science itself has become politicized in ways never seen before. This development endangers the ability of organized society to respond effectively to pandemics and other existential threats, including climate change.

Is there any hope of depolarizing the issue of COVID-19 vaccination, or trust in science itself? I’d say probably not—unless leaders in conservative politics, media and religion exert a concerted effort to change the narrative.

Adrian Bardon is a professor of Philosophy at Wake Forest University. He teaches courses on philosophy and science, philosophy and psychology, political philosophy, history of philosophy, and philosophy of religion. Bardon recently published "The Truth About Denial: Bias and Self-Deception in Science, Politics, and Religion" (Oxford University Press, 2020) and also wrote "A Brief History of the Philosophy of Time" (Oxford 2013). He has also edited or co-edited several other books.
All Posts

With your help, we can do even more important stories like this one.
Support the MFP
PrevPreviousMayor vs. City Council: Jackson Garbage Dispute In Court Thursday As Contract Ends
NextCrisis Averted: Jackson Mayor, Council Allow Waste Management Six Months of Trash PickupNext