Mississippi has now surpassed the state of New York, the nation’s original pandemic hotspot, in total COVID-19 deaths per 100,000 residents. The only state where the pandemic has proven deadlier than the Magnolia State is New Jersey. Mississippi displaced New York this month, with the New York Times reporting the news on Friday—a day after Gov. Tate Reeves told a Tennessee audience that southerners are “a little less scared” of COVID-19 due to their religious faith.

New York had led the nation in COVID-19 deaths per 100,000 until New Jersey overtook it for the top spot in June 2020; the Empire State remained second until this month when Mississippi bumped it down to third.

The Magnolia State may soon pass New Jersey to become the deadliest state of the pandemic era, though, if current trends continue. Data collected by The New York Times shows that Mississippi also ranks No. 1 in the nation for COVID deaths per 100,000 in the past two weeks alone, with Florida close behind in second place. New Jersey ranks 43rd for deaths per 100,000 in the past two weeks while New York ranks 40th.

Reeves: ‘You Don’t Have To Be So Scared Of Things’

After Mississippi became the world’s No. 1 hotspot for COVID-19, Gov. Tate Reeves told attendees at a Republican Party fundraiser in Memphis, Tenn., on Thursday, Aug. 26, 2021, that Mississippians “are a little less scared” of COVID-19 than other Americans because most share Christian beliefs (about 70% of all Americans identify as Christian).

“When you believe in eternal life—when you believe that living on this earth is but a blip on the screen, then you don’t have to be so scared of things,” Bill Dries reported the governor saying in the Daily Memphian. The governor said Mississippians should still do their part to help alleviate the COVID-19 crisis, though.

Reeves made those comments Thursday—the day after the Mississippi State Department of Health confirmed the sixth COVID death of a child in the state on Aug. 25, 2021. Two teenagers have also died of COVID-19 since July 25, 2021, including 14-year-old Mkayla Robinson, who had begun 8th grade at a mask-optional school just eight days before dying within hours of being diagnosed.

The day before Robinson’s death, the governor rejected calls for a statewide mask mandate in public schools; he also downplayed the virus’ effect on children as akin to “the sniffles” in most cases, saying child deaths were rare. But he struggled to remember that the state’s child death toll at the time was four.

“Does it happen from time to time? Sure it does,” he said on Aug. 13, 2021. “I believe we have had one fatality of an individual, maybe it could’ve been two—I think there’s three under the age of 18 at this time? Two?” 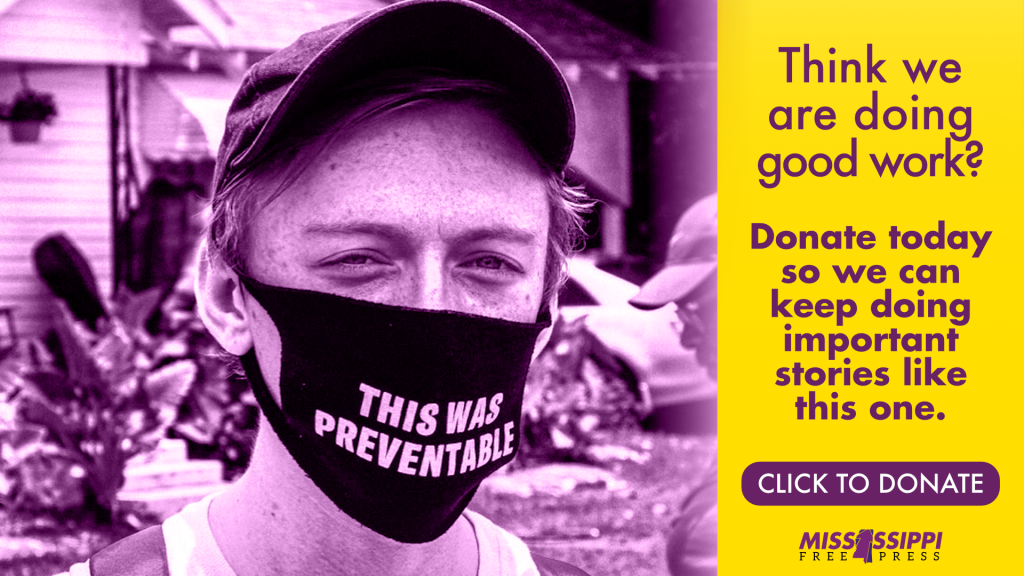 The governor’s rejection of calls for a mask mandate conflicted with remarks State Health Officer Dr. Thomas Dobbs made during the same press event.

“We do know kids in a structured setting with masks on is the right thing to do to keep kids in schools longer,” Dobbs said that day.

The COVID-19 pandemic’s early arrival in New York at a time when PPE and ventilator shortages were rampant offered the rest of the nation a preview of what could happen without urgent measures to stop the spread of the coronavirus. In New York City, morgues overflowed and bodies piled up in freezer trucks.

Mississippi did not confirm its first COVID-19 case until almost two weeks after the New York outbreak began. Like most other governors across the nation, Mississippi Gov. Reeves ordered a lockdown with social distancing mandated, albeit under pressure to do so. But while New York and other states that were hit hard in the first wave continued to keep stricter public-health measures in place afterward, Reeves began relaxing many measures in May and June 2020.

At that time, Mississippi ranked No. 15 in per 100,000 COVID-19 deaths, and New York still ranked No. 1. But starting the next month, three successive COVID-19 waves including the current one, would pound Mississippi hard with peaks like the one Gov. Reeves thought his state had avoided. Meanwhile, East Coast states that had been hit early kept more restrictions in place and often experienced less severe surges.

By the start of 2021, Mississippi ranked No. 8 in per 100,000 COVID-19 deaths after being devastated by the summer and fall 2020 surges. Though COVID-19 vaccines became widely available this year, Mississippi has lagged behind the nation in vaccinations, ranking as the second least vaccinated state behind Alabama. Meanwhile, New Jersey has the seventh highest vaccination rate at 61% fully vaccinated; New York ranks ninth with 60% fully vaccinated. The national vaccination rate overall is 52%.

“Excess deaths” measures how many more people have died from all causes in a year compared to the average number of yearly deaths in recent years. In a September 2020 press conference, Mississippi State Health Officer Dr. Thomas Dobbs, the top public-health official, said MSDH was “almost certainly undercounting” deaths due to “conservative” counting procedures.

In the first seven months of 2021, 22,807 Mississippians died compared to an average 19,044 during an equivalent period during the three years preceding the pandemic. That brings this year’s excess death toll so far to 3,758 lives. Currently available death data only go to July 24, 2021, and does not yet include any deaths from this month.

This story has been updated to reflect new calculations based on 2020 Census data.

With your help, we can do even more important stories like this one.
Support the MFP
PrevPreviousLynching at the Courthouse: Lamar Smith Deserves a Courthouse Marker in Brookhaven
Next‘Don’t Know Where We’re Going Next’: Mass Evictions Underway In StarkvilleNext