Mississippi’s Hospital System Could ‘Fail’ In 10 Days, UMMC Warns As Feds Rush In

With COVID-19 patients overflowing at the University of Mississippi Medical Center, including in its pediatric center, hospital leaders are warning that the medical system statewide could be on the verge of failing without drastic intervention. Two days ago, Mississippi health officials announced that zero intensive-care beds remained available in hospitals statewide.

“Since the pandemic began, I think the thing that hospitals have feared the most is total failure of the hospital system. And if we track back a week or so when we look at the case positivity rate, the rate of new cases, the rate of hospitalizations—If we continue that trajectory within the next five to seven to 10 days, I think we’re going to see failure of the hospital system in Mississippi,” UMMC Associate Vice Chancellor for Clinical Affairs Dr. Alan Jones said during an afternoon press conference.

The dire pronouncement came as representatives from the federal government arrived in Jackson to assist with a field hospital in the medical center’s parking garage, news that Mississippi Free Press reporter broke early today. With UMMC short on staff and lacking in ICU care capacity, the U.S. Department of Health and Human Services is sending physicians, nurses, respiratory therapists and pharmacists to help. Mississippi has about 2,000 fewer nurses working than eight months ago, and UMMC officials said their teams that remain “are stretched very thin.”

“At the end of the day, we’re not only faced with not being able to hire enough staff because so many nurses have left the state, but today we have 70 hospital employees and another 20 clinic employees that are out on quarantine or have COVID,” Jones said during today’s press conference.

UMMC’s pediatric hospital, Children’s of Mississippi, is also full, Jones said today. In late July, UMMC officials said they did not expect the pediatric hospital to fill up, but a surge in cases among children is happening just as children return to school—in many cases with no mask mandates and fewer precautions than last fall. Children’s of Mississippi currently has 26 pediatric COVID-19 patients, Jones said, with six in ICU care and four on ventilators.

Gov. Tate Reeves has refused to mandate masks in schools, saying late last month that federal guidance to do so was “foolish and harmful.” The Mississippi State Department of Health reported that almost 1,000 schoolchildren tested positive for COVID-19 last week alone.

“This is not permanent. We do know it will be helpful and will be additive to the system. It’s really a bandaid. It’s not a final answer,” she said. 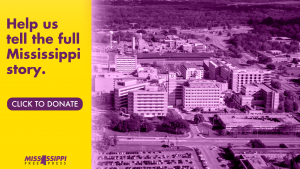 “Get the vaccine. There is no doubt about it. The number-one thing would be to get the vaccine. And until we get to the point where we’re not in a surge, wear a mask. … The major difference in what we’re seeing now the delta patients as opposed to the alpha group is they are younger and have fewer comorbidities,” she said.

“At this time last year most patients we were seeing getting really sick were older patients with underlying illnesses. In this variant, we are seeing younger patients who are healthy getting hit hard with this. So that’s the biggest difference with before and now.”

With your help, we can do even more important stories like this one.
Support the MFP
PrevPreviousUMMC Prepping Garage For Field Hospital, Requesting Federal Support To Staff It (Updated)
NextWith Mississippi Hospitals Near Calamity, Gov. Reeves Left State For GOP Political EventNext