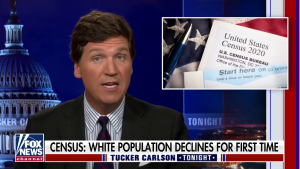 Data from the 2020 U.S. census released last Thursday placed the white population at around 58%, the first decrease in the number of people who identify as white since 1790. That statistic sounded alarm bells for the conservative media personality Tucker Carlson and has helped him mainstream the white supremacist fear that people of color will erase the white population, an idea referred to as “replacement theory.”