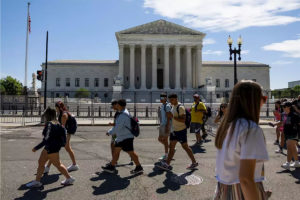 “Carson v. Makin represents a chance for more parents to give their children an education in line with their religious beliefs,” Charles J. Russo writes. “Opponents fear that cases such as Carson could establish a precedent of requiring taxpayer dollars to fund religious teachings. Based on its most recent judgments, many legal analysts maintain that the current court is increasingly sympathetic to claims that religious liberties are being threatened but, in so doing, is creating too close of a relationship between religion and government.”