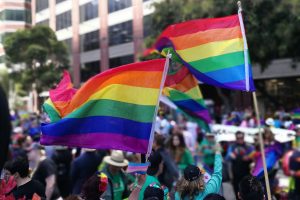 From Gay Nazis to ‘We’re Here, We’re Queer’: A Century of Arguing About Gay Pride

The Nazi Party itself was zealously anti-gay. Once in power, the Nazis murdered thousands of men for the “crime” of male-male sex. Yet, the historical record shows that a small number of men quietly belonged to both the homosexual emancipation movement and the Nazi Party, though they were not open about their sexuality within the party.