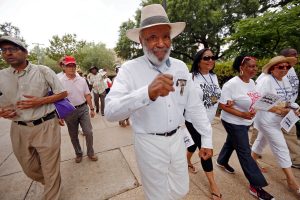 ‘The Joker Up There’: Meredith Marchers Confronted Unjust Confederate Statues in 1966

The protest against Confederate monuments as symbols of racial injustice is not new. It is also not new to Mississippi.  As Karen Cox describes in her new book, “No Common Ground: Confederate Monuments and the Ongoing Fight for Racial Justice,” that protest was front and center in 1966 during the now infamous Meredith March in Mississippi. Here is an excerpt from her book about protests against statues in Grenada, Greenwood and Belzoni during James Meredith’s 1966 “March Against Fear.”