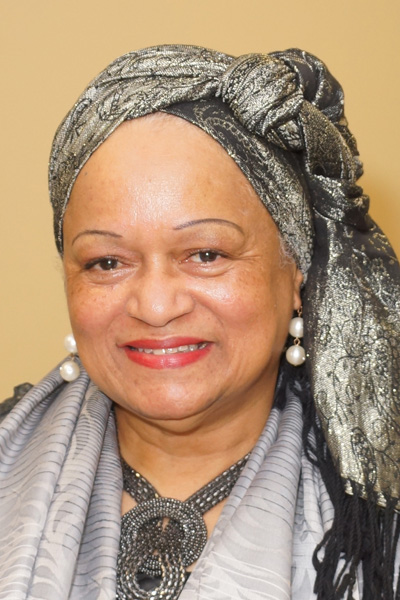 Ayesha K. Mustafaa has been editor of the Muslim Journal weekly newspaper since January 1989. She is a graduate of Bucknell University in Lewisburg, Penn., with a BA Degree and Double Major in Psychology and Political Science. She has a Master’s Degree in Journalism from Columbia College of Chicago, Ill. She is the third woman editor of the nearly 45-year-old newspaper and its longest tenured editor.
Ayesha converted to AL-Islam, coming from a Mississippi family of Civil Rights activists of the Dr. Martin Luther King Jr. era. She joined the community of Muslims affiliated with Imam W. Deen Mohammed, the son of Elijah Muhammad and mentor to Malcolm X, in late 1974, through the Atlanta, Ga., Muslim Community. She moved to Chicago in mid 1975 and worked throughout the Muslim community offices prior to becoming Muslim Journal editor.
Most significant among those years was her work with the Prison Dawah or Islamic teachings to the incarcerated populations, prison services being part of her concentration as an undergraduate. She worked in the administrative offices of Muhammad Mosque No. 2 and Sis. Clara Muhammad School Chicago and the Muslim Women Development Class, as well as a brief period at the historic Muhammad Speaks plant on Federal Street.
In 1978, she was named lead Instructress for the Muslim Sisters trained by Imam W. Deen Mohammed to teach Al-Islam and in formation of the women’s group Committee to Enhance the Role of Women in Society (CERWIS).
Her initial job in Chicago was as a transcriber of Imam Mohammed’s lectures that were used to create the Imams Kits that trained former Nation of Islam Ministers and Captains for the role of Imams, a time which she calls her “greatest learning experience.”
Ayesha also has traveled as part of delegations led by Imam W. Deen Mohammed, several times going to Saudi Arabia to Riyadh, Jeddah and Mecca, to Jerusalem and the West Bank. Most notable during one trip was the meeting between Imam Mohammed and Palestinian President Yasser Arafat.
She was a presenter at the 3-day International Media Conference, hosted by the Focolare Movement’s NetOne Media Group held in Rome, Italy, in 2004, with 800 participants from over 20 countries. She made Hajj to Mecca in 1977 with the first and then largest Muslim American group led on Hajj by Imam W. Deen Mohammed. She has made Umrah (lesser Hajj) several times.
Ayesha was one of the inaugural  hosts of the seven daily one-hour talk radio shows – every Friday from 6 p.m. to 7 p.m. – for Radio Islam (continuously live streamed at www.radioislam.com), produced by Sound Vision Foundation, on WCEV 1450 AM in the Chicago area until she move to Jackson, Mississippi, in 2011.
She was an advisory member of the Lutheran College Christian – Muslim Peace Engagement in Chicago with Dr. Harold Vogelaar and a frequent speaker at interfaith settings and to school/college audiences.
Since moving to Jackson, she has worked as editor of The Mississippi Link weekly newspaper, now serving as one of its contributing writers. In 2015, she joined the Tougaloo College Mass Communications Department faculty as an assistant professor after two years as an adjunct professor. Recently, she became a board member of the International Museum of Muslim Cultures in Jackson.

Ayesha was named the Muslim Woman of the Year by the Community of Imam W. Deen Mohammed in 1994. A Street in New Medinah, Miss., has been named in her honor at New Medinah’s 25th Annual Retreat of 2011. She is the mother of 4, grandmother of 5 and an advocate for foster parenting.