Msgr. Elvin Sunds grew up in Des Moines, Iowa but has claimed Mississippi as home for the last 54 years. He received his bachelor’s degree from St. Joseph College in St. Benedict, LA, Master of Divinity degree from Notre Dame Seminary in New Orleans, and a Master of Social Work degree from Catholic University of American in Washington, D.C. Msgr. Sunds was ordained a priest for the Catholic Diocese of Jackson in 1973 and over the years has served several parishes in the Jackson area as well as Meridian and Biloxi. He also served as Associate Director of Catholic Charities for three years and Executive Director for sixteen years. He served as Vicar General for the Diocese of Jackson for ten years. In June of 2019 he retired from full-time ministry. He continues part-time ministry at St. Francis of Assisi Church in Madison, MS and does volunteer work for the Catholic Diocese of Jackson. Msgr. Sunds has served on a number of boards, including St. Dominic Health Services, Catholic Charities, the Catholic Foundation, several housing corporations and community boards. 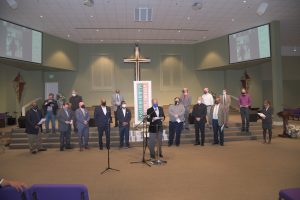