Award-winning Reporter Kayode Crown was born in Nigeria, where he worked as a journalist at a state government-owned enterprise. He crisscrossed various editorial positions beginning in 2010 before moving to the United States with his family in 2019. He earned a post-graduate diploma in journalism from the International Institute of Journalism in Abuja, Nigeria, in 2011. Email story tips to Kayode Crown at [email protected] Award-winning Senior Reporter Ashton Pittman, a native of the South Mississippi Pine Belt, studied journalism and political science at the University of Southern Mississippi. Previously the state reporter at the Jackson Free Press, he drove national headlines and conversations with award-winning reporting about segregation academies. He has won numerous awards, including Outstanding New Journalist in the South, for his work covering immigration raids, abortion battles and even former Gov. Phil Bryant’s unusual work with “The Bad Boys of Brexit" at the Jackson Free Press. In 2021, as a Mississippi Free Press reporter, he was named the Diamond Journalist of the Year for seven southern U.S. states in the Society of Professional Journalists Diamond Awards. A trained photojournalist, Ashton lives in South Mississippi with his husband, William, and their two pit bulls, Dorothy and Dru. Follow on Twitter @ashtonpittman. Send tips to [email protected] 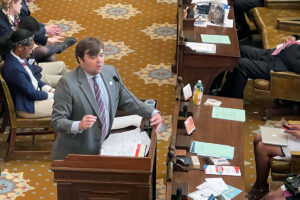 The “Regulate Experimental Adolescent Procedures (REAP) Act,” would prohibit standard treatments such as hormone therapy and puberty-blocking drugs by barring public funds from going to “any entity, organization or individual that provides gender transition procedures to a person under eighteen years of age.” 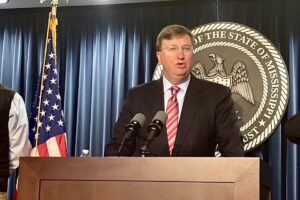 The Mississippi State Department of Health today lifted a boil water notice for the entire City of Jackson for the first time since July 29, 2022. Gov. Tate Reeves announced at a press conference today. 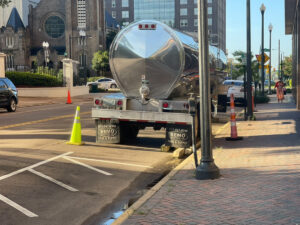 A viral video showing a tanker truck parked across from the Mississippi Governor’s Mansion in Jackson has sparked speculation online that Gov. Tate Reeves’ home is enjoying special access to clean water while most residents of the capital city go without safe running water. But the speculation is wrong.

Mississippi’s only abortion clinic could be forced to cease operations in two days unless a judge agrees to block a near-total abortion ban from taking effect. In Hinds County Chancery Court this morning, an attorney for the Jackson Women’s Health Organization argued that the Mississippi State Constitution protects the right to abortion and asked Judge Debbra K. Halford to block the ban’s enforcement.