As the assistant director of research at the USC Center for Religion and Civic Culture, Hebah Farrag manages large grant-based research projects while pursuing her own research on religion, social change and new spiritualties. Recent projects include the Religious Competition and Creative Innovation project, a $2.6 million initiative funded by the John Templeton Foundation that investigates the link between religious competition, cooperation and innovation in Los Angeles and Seoul, South Korea and the Pentecostal and Charismatic Research Project, among others. Farrag also serves as one of the center’s primary evaluators in many measurement, learning and evaluation projects. Her current research focuses on faith-based resilience metrics, measuring impact in community groups and new spiritualties emerging from Black Lives Matter-affiliated organizations. Ann Gleig is the Associate Professor of Religion at the University of Central Florida. Her first monograph American Dharma: Buddhism Beyond Modernity was published in February 2019 by Yale University Press. Ann is currently working on three projects: A co-written book with Amy Langenberg on sexual violations in American Buddhism, a co-edited collection with Scott Mitchell on Buddhism in America, and a monograph examining American revisionings of Asian liberation traditions, particularly those with non-dual metaphysics. In addition, Ann is part of a five-person core team of religious studies scholars working on a five year project called the Religion and Sexual Abuse Project, which has been funded by the Henry Luce Foundation. 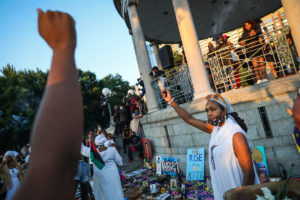 Since 2015 we have interviewed BLM leaders and organizers as well as Buddhist leaders inspired by the movement. BLM was not only a movement seeking radical political reform, but a spiritual movement seeking to heal and empower while inspiring other religious allies seeking inclusivity.