COVID-19 may be propelling an explosion in drug overdose deaths in Mississippi and nationally.

It’s been “like pouring gasoline on a fire,” as one law enforcement official said. Drug overdose deaths soared nationally to the highest number ever recorded. In Mississippi, they rose 26% in the 12 months ending in May 2020. Provisional data from the Centers for Disease Control and Prevention show 81,000 Americans died from a drug overdose, which included early months when cities were in lockdown because of the coronavirus.

Steven Maxwell, director of the Mississippi Bureau of Narcotics, released even more startling numbers, showing the number of all overdose deaths are on track to double in 2020 what they were in 2017—from 261 in 2017 to the preliminary 419 in 2020. Those overdose deaths include prescription drugs, opioids, illegal drugs like heroin, fentanyl, methamphetamine, even marijuana. The findings were based on various drugs found in the individual’s system and drugs found near the body.

“Part of the problem with COVID is with people not being able to see their physicians. And if you can’t get to your physician, you turn to street drugs,” said Susan McCoy, executive director of the Mississippi Board of Pharmacy.

While overdose deaths were already increasing in the months preceding the novel coronavirus disease pandemic, the CDC says the latest numbers suggest an acceleration of overdose deaths during the pandemic.

“The disruption to daily life due to the COVID-19 pandemic has hit those with substance use disorder hard,” CDC Director Dr. Robert Redfield declared weeks ago. “As we continue the fight to end this pandemic, it’s important to not lose sight of different groups being affected in other ways. We need to take care of people suffering from unintended consequences.”

The CDC reports that, nationally, synthetic opioids—primarily those illicitly manufactured—appear to be the primary driver of the increases in overdose deaths, increasing 38.4 percent over a year’s period leading up to June 2019 compared with the same period leading up to May 2020.

The CDC says overdose deaths involving cocaine increased by 26.5 percent and those involving psycho-stimulants, such as methamphetamine, rose by 34.8 percent. surveillance data cannot answer what has caused the opioid epidemic nationally and in Mississippi. But Meg Pearson, director of pharmacy at the Mississippi State Department of Health, said the worsening epidemic is attributed first to prescriptions, then an increase in heroin overdoses, followed by increases in illicit fentanyl.

“A fourth phase has sometimes been described to include methamphetamine,” Pearson added. Within these phases, a reduction in access to prescriptions may “squeeze the balloon,” she said. 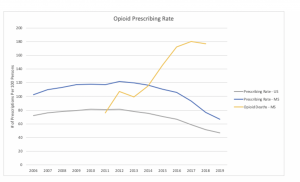 UMMC has seen an increase in deaths from illicit opioids—fentanyl and fentanyl analogs—but not to the same extent as seen nationally, he said. “Prescription opioids still cause more deaths than synthetic opioids in Mississippi, which is different from what you see on the national level,” Vearrier added.

Mississippi has also seen an increase in heroin-related deaths, “although we have a lower mortality rate than the country as a whole (1.3 per 100,000 in Mississippi versus 4.7 per 100,000 in the United States overall),” he said.

The opioid epidemic, spurred by over-prescribing, has been the focus of drug intervention in recent years. But a collaborative effort of various state agencies, stiffer regulations and education resulted in fewer prescriptions being written.

Vearrier said Mississippi operates a prescription-drug monitoring program that allows physicians, pharmacies and certain state agencies to track the number of opioid prescriptions patients fill in the state. Mississippi also shares that data with 31 other similar systems (mostly other states) “so that we can minimize opioid misuse or abuse occurring across state lines” he said.

Mississippi providers are required to check the program prior to writing any prescription for opioids. The state also has a standing order for naloxone that permits pharmacies to dispense naloxone without a prescription, he said. That means anyone such as a family member who witnesses or is likely to witness an overdose to obtain naloxone to reduce the likelihood of death and other adverse health outcomes, he said.

The Mississippi State Board of Medical Licensure also requires prescribers with DEA certificates to undergo training related to prescribing of controlled substances every two-year cycle, Vearrier said. The board regulates prescribing of opioid medications, including ceiling or maximum doses per day, co-prescribing benzodiazepines with opioids, drug testing in patients on certain opioids, and the percent of patients in a physician’s practice that may receive opioids for chronic pain.

“In some markets, 50% of interdicted heroin is actually fentanyl. The fentanyl is diluted (“cut”), similar to what dealers do with heroin, but there is the potential for a strong batch of fentanyl to cause a jump in overdose deaths,” he said. Addicts also may use prescription drugs in combination with heroin laced with fentanyl.

“There are scary, scary combinations going on,” said Shane Garrard, director of the Bureau of Alcohol and Drug Addiction Services for the Mississippi Department of Mental Health. He said regional mental health centers are seeing these drug combinations in their clients.

The pandemic also may have played a role in an uptick in opioid prescriptions. Prescriptions of all opioid-containing drugs decreased almost 8% between 2012 and 2017 in Mississippi, while those of addiction treatment medications increased by more than 59%, according to the Health Department, which uses the prescription monitoring program.

The number of prescriptions and dosage units began a steady decline in the third quarter of 2017 but began inching back up in the second quarter of 2018, the Mississippi Opioid and Heroin Collaborative reports.

By 2019, there were enough dosage units of opioids dispensed for every man, woman and child in Mississippi to have a supply of nearly 44 dosage units, ranking Mississippi fifth in the nation for per-capita annual opioid prescriptions, according to Stand Up Mississippi, a statewide initiative to battle the opioid crisis in the state.

Strength of dosages is also a factor. The November 2018 Mississippi Morbidity Report found the top three prescribed opioids between 2012 and 2017 were hydrocodone, oxycodone and tramadol, accounting for around 90% of the total opioid prescriptions each year. Prescriptions for oxycodone, an opioid 1.5 times stronger than hydrocodone, jumped by 51.4% between 2012 and 2017, fueling the overall increases seen in morphine milligram equivalents, which measures the strength of the opioid.

McCoy said she and others will have to analyze why the number of opioid prescriptions has seen an uptick after going through a steady decline since 2017 and keep an eye on the numbers. She noted more physicians are practicing and patients have turned increasingly to telemedicine during the pandemic. “COVID’s opened a lot of new doors that haven’t been opened before,” she said.

“There are a lot of factors to consider, including whether psychological stress and disruption in jobs and the economy increased substance use, thereby increasing risk of overdose death; whether COVID lockdowns and restrictions impacted drug transport across national borders or state lines or impacted local availability of illicit drugs; and whether job losses may have decreased illicit drug use due to financial hardship. We just don’t know yet,” Vearrier said.

“To decrease the number of opioid deaths, we need to get Narcan (naloxone) into the hands of first responders,” Garrard said, then follow it up with treatment.

The CDC says the increase in overdose deaths highlights the need for essential services to remain accessible for people most at risk of overdose and the need to expand prevention and response activities.

McCoy said there’s an ongoing problem of not enough treatment facilities to handle all these people needing help. While stricter regulations and education in the medical community have helped, there are still a lot of people who became addicted before those changes began.

“Expanding access to treatment would be a benefit to any in a position of under- or uninsured status regardless of the mechanism to expand such access. And access to treatment ties back to the question of impacts of the pandemic if job loss has occurred,” Pearson said.

“Medicaid won’t pay for residential care but it does pay for outpatient care,” Garrard said.

In 2017, the Mississippi Department of Mental Health received $3.58 million in federal funding through the State Targeted Response to the Opioid Crisis to combat opioid addiction and overdose related deaths.

“The federal grants DMH has received for opioid services have allowed for outreach and prevention services, like Stand Up, but the majority of the funding goes towards treatment providers who are then able to provide services for people who would not otherwise have a payment source,” said Adam Moore, spokesman for the Department of Mental Health. “Funding also helps increase access to medication-assisted treatment. The prevention aspect of the Stand Up campaign has also included distributing Narcan, which can reverse the effects of an overdose, to law enforcement and first responders around the state.”

Moore said 2,416 people received medication-assisted treatment in fiscal year 2020, and the large majority of them, if not all, received that through the grant funding.

“We want to make sure people know we’re here and want to connect them with their areas. Don’t let money be a factor because we have these grants,” Garrard said.

In addition, UMMC operates an Addiction Medicine clinic that offers for opioid addiction, Vearrier said, and has a grant to start offering the therapy via telemedicine.

“UMMC’s emergency medicine residents are required to undergo a national training program on screening and referral to treatment for patients with substance addictions called SUSTAIN-ED. We have vouchers in the emergency department to help patients with limited financial means obtain naloxone,” he said.

“These interventions, which are similar to measures enacted in other states, have resulted in the number of opioid prescriptions being written in the state to be about half what it was from the peak in 2012. However, opioid deaths continued to increase through 2016 and since then have been stable.”

Garrard said he expects the “true numbers” of opioid prescriptions will be up. Because of education and regulation, physicians are rarely handing out 30-day supplies of opioids, Garrard said. Now prescriptions are down to three- or four-day supplies, he said. But, “we’re still on the forefront of this battle with opioids,” he said.

Further reducing overdose deaths requires continuing to educate health-care providers to not use opioids for chronic, non-cancer pain; to reduce dosing in patients on opioids to less than 50 morphine milligram equivalents per day; and to use opioids in a “multimodal pain management approach,” said Dr. Vearrier, the professor of emergency medicine at the University of Mississippi Medical Center and toxicologist with UMMC’s Mississippi Poison Control Center.

Other approaches, he said, are:

For more information about services at the Department of Mental Health, call the DMH Helpline at 1-877-210-8513.

Debbie Skipper is managing editor of the Mississippi Center for Investigative Reporting, a nonprofit news organization that is exposing wrongdoing, educating and empowering Mississippians, and raising up the next generation of investigative reporters. Sign up for MCIR’s newsletters here. Email her at [email protected]
All Posts
Republish This Story

With your help, we can do even more important stories like this one.
Support the MFP
PrevPreviousRacial Disparities in Vaccinations Continue in Mississippi As COVID-19 Declines
NextHattiesburg Mayor Addresses Police Shooting of Teenager Near High SchoolNext