My Family Fought To Change the State Flag: Will Mississippi Fight For Unity? 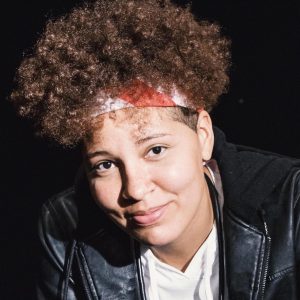 I first saw the Confederate battle flag at that KKK rally in 1992. I was 5 years old, riding shotgun in my Pop’s classic Grand Marquee. My two older brothers were in the back with a sign my Pop made. I remember the smell of light cologne and leather inside the car and my brother kicking the back of my seat.

I remember walking among a lot of people yelling in unison, my brothers and me clustered tightly around my Pop as we watched these folks dressed in all black, others dressed in all white. I saw symbols that I would later be able to identify as a Celtic cross, lightning bolts (Nazi) and Confederate flags. I remember my Pop engaging with these men, calm with a slight smile on his face as they debated something I knew nothing about.

As an adult I would ask my Pop why he took his small children to a KKK rally. He explained that he wanted us to know early on that people exist who want to hold us back from what we wanted to achieve, simply because of the color of our skin.

My Pop was born and raised in Mississippi where they call KKK members “kluckers.” They were cowards, chickens who hid behind masks and carried out their violence in the dark of night. He taught us not to fear them and to speak truth against racism and sexism whenever we had the chance. Most importantly, he taught us the power of speaking truth to the very people who wanted us silenced.

Pop taught me about my grandfather (my Big Daddy) Rev. Clyde Briggs of Roxie who the kluckers harassed and shot at because he was fighting for voting rights and education reform in Mississippi during the 1960s. Pop talked about my Big Daddy’s death at the young age of 42, and how some in our family believed he was poisoned. He showed me the bullet holes in his childhood home caused when the Klan shot into Big Daddy’s house as his pregnant wife and children slept.

I didn’t know at the time, but I was being taught to pick up the torch for my family and continue the fight against white supremacist systems.

State Flag: ‘A Glorification of a Deep Division’

I would see that same Confederate symbol when I attended Jeff Davis Elementary named for the “president” of the Confederacy; when they took us on a middle-school field trip to Davis’ home, Beauvoir, during my middle-school years; when I walked the stage at my graduation from Biloxi High School; when I attended Jeff Davis Community College; and most disturbingly, on my state flag.

My friends and I would drive past Beauvoir every day on the way to school and half-jokingly plot about capturing the gigantic Confederate flag that flew in front of Jefferson Davis’ home after the South lost the Civil War. I remember the day after Hurricane Katrina destroyed my hometown, my family and I walked to Beauvoir and saw that same flag tattered on the ground. I touched it and played with the holes in it, and for a fleeting second, I smiled for my ancestors. I had captured the flag.

That Confederate emblem that haunted my childhood represented a heritage that brutalized, castrated, lynched and systematically oppressed the rights of my ancestors. It was a taunting image that reminded me that I’d never be seen as fully human in the eyes of some people. Not just by the cowardly “kluckers,” but by my teachers, police officers, the politicians who represented me, even my governor. It was a glorification of a deep division.

In 2001, there was a referendum vote wherein Mississippi voters chose to keep the current State Flag design. The same year my Pop brought a lawsuit against the State of Mississippi calling for the removal of the flag based on religious grounds; the lawsuit made it all the way to the Supreme Court where they failed to rule on it. Both felt like devastating blows for my family and neighbors. Mississippi’s nearly 40% black population once again was being overlooked and our dignity diminished.

I left Mississippi as soon as I could.

‘My Body Was Not Safe in My Home State’

When I was 20, I moved to New York for college. I studied political science, recorded music and founded an organization called Strive Till I Rise (in honor of Emmett Till) and began traveling back and forth between NYC and Mississippi to share my work with young people and encourage them to vote and use their voice against problematic institutions. But the flag that welcomed me home continued to remind me that my work was not wanted and my body was not safe in my home state.

In February 2016, a headline began to circulate about Mississippi Gov. Phil Bryant proclaiming April as “Confederate Heritage Month.” Reading the article, I felt a passionate cry from my ancestors, who were brutalized under that “heritage.” I had two major live shows scheduled at the end of the month; I knew it would be at one of these shows, I would make my statement.

On April 26, 2016, I addressed a packed house at the historic music venue S.O.B.’s in New York. My older brother, Israfel, was the only soul who knew my plan. The crowd grew quiet as I took the stage, I spoke about “Confederate Heritage Month” and addressed the audacity and arrogance of Mississippi leadership. Then I reached into my New York Yankees backpack, I pulled out a noose and put it around my neck. I then pulled out a large Confederate flag and wrapped it around my  body. As I raised a fist in the air, cameras flashed.

This image went viral the next day, sparking incredible backlash and national headlines. Here in Mississippi, the conversation about the state flag was rejuvenated. Media from Breitbart to The New York Daily News to Billboard wrote about my solo protest. It turns out, many Americans had no clue that the Confederate emblem was still part of the Mississippi state flag.

This protest would launch me into this ongoing fight to change the Mississippi flag.  My collaborator, Moral Courage Project, and I interviewed activists on the ground who have been fighting this issue for years. I also met activists Lea Campbell from Mississippi Rising Coalition, Dr. Edelia Carthan, Sharon Brown, Danyelle Holmes, Judge Carlos Moore, author Margaret McMullen, and a  young brother and student activist named Reginal “Jo Jo” Virgil.

I also met with neo-Confederates and descendants of Confederate veterans who explained their stance and listened to mine. I met dozens of people fighting to change that flag and dozens of people fighting to preserve it. I did a National tour with Vote Common Good, educating our audience about the Mississippi flag and the need for civic discourse. I realized during this time that the removal of the flag would indeed be a symbolic step toward reconciliation and healing, but the real work would have to come from the people, through civil discourse, education and revolutionary love.

Then came May 25, 2020, and the execution of George Floyd at the hands of the Minneapolis police. As protests erupted worldwide, I watched as moderate white people hopped off the fence and joined our fight. I knew this would change the conversation around inequity, incarceration and police reform. As Confederate statues began falling all around the country my collaborators and I realized that this was the time for that flag to come down as well.

On June 30, 2020, I stood outside the Mississippi Governor’s Mansion as he reluctantly signed a bill that would remove the Confederate emblem from our state flag. I was joined by two documentary crews and surrounded by collaborators and other activists. The feeling was surreal. For the first time, I felt a great pride in Mississippi. I knew that this was a major step toward unity within Mississippi, and unity between Mississippi and the rest of the nation.

How do you solve a division problem? You find the common denominator.

I ask my fellow Mississippians, are you willing to join the fight for a united and prosperous Mississippi? If so, speak to your neighbors, co-workers, family and friends. Reflect on the way you perpetuate division. Do not let racial, economic or religious differences deter you from communicating with one another. Find the common goals that you all have for your children, elders and community. Build upon that foundation until you become the leaders that you seek, until your vision of an equitable and just society becomes reality.

Our fight to remove the Confederate emblem from the Mississippi flag was never about a piece of cloth. It has always been about the people who make up the state and the nation I call my home.

Genesis Be is an art activist from Biloxi, Miss. She is the founder of Strive Till I Rise youth initiative sponsored by Focus For Health and The Middle Project. She serves on the advisory board of The Mississippi Free Press.
All Posts

With your help, we can do even more important stories like this one.
Support the MFP
PrevPrevious‘From a Place of Love, Not Hate’: Philadelphia, Miss., Group Wants Confederate Statue Moved
NextOne Grove To The Next? Why UM’s Confederate Controversy May Not Be OverNext