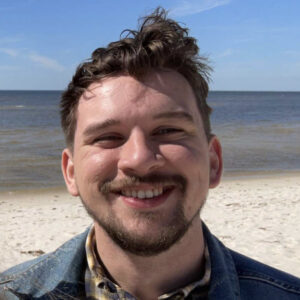 Editor’s Note: An artwork depicted in a photo used for this article contains nudity.

J.J. Foley sat in the studio of her Mississippi Gulf Coast home in the 1980s going through old scraps of fabric she once used to make dresses for her three daughters. Inspiration struck, and a figure emerged amid a collage of stitches and strong, almost sculptural brushstrokes: the figure of a woman, her hair in a clutch above her head, readying herself to cut it all off.

“It just felt like a part of my life was ending,” the artist told the Mississippi Free Press while speaking on what she considers her most meaningful work. She created this piece after it was time for her youngest daughter to leave home, and Foley had no clue how to process the feeling that this shift left in her. She turned to art.

“There’s a lot that’s not perfect about it, but it’s such a real emotion,” she says, pointing to the aspect of her work that unites her with many artists around the world who turn to art as a form of therapy.

This sentiment is especially true for artist Jacqueline Gonzalez Wooton, whose art will be exhibited alongside Foley’s at the Hattiesburg Arts Council’s exhibition of the two Mississippi artists on Saturday, Sept. 10. Gonzalez Wooton’s particular style, one which she calls “visual symbolic art,” is strongly rooted in this idea of emotion. She aims for her artworks to share a transactional relationship with their viewer, almost as if they are alive: “Ideally, that’s what I want my paintings to be—something that feels your soul and heart,” Gonzalez Wooton says.

‘It’s All Just a Big Gumbo’

Gonzalez Wooton, who moved to New Orleans from Puerto Rico in 1978, is an artist who thrives in transition. She primarily operates with mixed media, embellishing the acrylic figures on her canvases with found objects like crosses and bottle caps.

Art was always a part of her life, growing up with a father who was an active visual artist specializing in charcoal and pastel works. “It’s something that was instilled in me, so I’ve always painted,” she said.

When creating art, though, Gonzalez Wooton refuses constraint to any one medium, instead constantly experimenting with new combinations of paints and plaster that make each of her artworks unique. She credits her experience living in New Orleans as a major influence on her need to constantly change her mediums: “I found that in New Orleans, whether you’re white, Black, Asian or Spanish, it’s all just a big gumbo,” she says. “And that taught me that you shouldn’t restrict yourself to just one thing—be all encompassing.”

Migration also defined Foley’s early life. With a father who worked for NASA as a computer programmer, Foley spent most of her early life in a car, moving between cities like Phoenix, Bay St. Louis and Cocoa Island. In high school, she ended up on the Mississippi Gulf Coast, where she still lives and works to this day in Pass Christian.

Foley developed an interest in art on the road while crammed in the backseat of the small family car between her various siblings and pets. “I started drawing, like any small child,” she says, “but I became obsessed, and I never stopped. I’ve been drawing and painting my entire life.”

While Foley did not pursue any formal education in painting until going to the University of Southern Mississippi for her undergraduate art degree, she grew up in a homeschool of sorts. Her mother, a landscape painter, subscribed to the Time Life Library of Art series, a periodical that covers the lives and styles of famous artists like Michelangelo, Rembrandt and Da Vinci. This periodical and her mother’s careful attention to Foley’s education of art was pivotal in expanding her daughter’s understanding of art.

“I would read these books, and my mother would order these plates (images of art) and quiz me on them,” Foley said. “So, I had a really good understanding of painters and how they painted. I could recognize them at an early age.”

Her early, intensive education in art allowed Foley to grow into a world-renowned and commercially successful artist whose works are featured in galleries across both America and Europe.

An Exhibit That Welcomes All

These artists are not exhibiting together by accident. Alehandro Wooten, a fellow artist and the executive director of the HAC, specifically sought to choose artists from the state for the organization’s fine-arts exhibition.

“There’s so much talent in Mississippi,” he said. “You can really just go anywhere and find someone amazing.” Gonzalez Wooton and Foley, who live in Hattiesburg and Pass Christian, Miss., respectively, serve as prime examples of the Mississippian artists the HAC wants to showcase to the community.

Wooten says that placing these artists together for an exhibition has as much to do with their similarities as it does their differences. As female artists, Foley and Gonzalez Wooton both explore the female body and its perception as a theme in their works. Stylistically, however, they do so through different methods.

“J.J. Foley has a very formal and structured approach,” Wooten says. “Her pieces are about shape and line and form and things that we put an emphasis on when you receive a degree in ‘Arts’ with a capital ‘A’”

In contrast, “(Gonzalez Wooton’s work is) more about spirituality, visions or even esoteric religious experiences,” Wooten says, noting a deviation from the concrete form of Foley’s works for more abstract, symbolic ideas.

To Wooten, their distinctions highlight why including both of them ultimately strengthens the exhibit as a whole. “These are two female Mississippi artists who, while they have different styles and backgrounds, have many common threads between their works,” he says.

Jacqueline’s husband Dr. John Wooton and his steel-pan ensemble “African-Caribe Rhythms” will perform during the exhibition so that visitors will experience the artworks alongside lively, Caribbean rhythms. Both artists cite connections between their works and music. For Foley, she is premiering part of a 46-work series at this exhibition titled “Lost in Time and Space” that takes inspiration from the Lord Huron album of the same name.

To Gonzalez Wooton, music acts as a strong accompaniment to the energy of her creations: “Visual art and music are perfect partners,” she says. “What (Dr. Wooton) will be playing will complement the feeling we want you to have when looking at this art. It’s even in the way you walk; like, you’ll probably start walking to the rhythm, swaying softly. That’s also what I think the painting will inspire.”

Ultimately, this exhibition is a chance for the HAC to showcase two distinguished artists while simultaneously promoting their mission of being a source of art for the community that is accessible, down-to-earth and inclusive. Since its inception in 1970, the Hattiesburg Arts Council has hosted free concerts and exhibits, and it has sponsored local competitions and classrooms for artists.

On a personal level, Alehandro says that he and the rest of the HAC put their energy toward being “happy, shining, inviting, hospitable people” in an attempt to dispel some of the misconceptions that some may have regarding artists and the culture surrounding them: “People automatically assume that artists are going to be aloof, down the nose or stuck up,” he says. “That’s just not the case here. This exhibit is a welcoming situation; anyone on Saturday can come through that door.”

The J.J. Foley and Jacqueline Gonzalez Wooton Fine Arts Exhibit is on Sept. 10, 2022, at the Hattiesburg Cultural Center (723 N. Main St., Hattiesburg). The exhibit will open at 3 p.m. and begin with a “Meet the Artists” opportunity from 3 p.m. to 3:45 p.m. Afterward, Dr. John Wooton will lead a musical performance titled “Afro-Caribe Rhythms” from 4 p.m. to 6 p.m., with a reception to follow.  Admission is free. Caribbean white or colorful tropical party attire is encouraged. For more information regarding The Hattiesburg Arts Council or upcoming events, call 601-583-6005 or visit hattiesburgartscouncil.com.

Gaven Wallace is a writer based out of Hattiesburg, Miss., where he attends the University of Southern Mississippi in pursuit of a Masters of the Arts in creative writing. During his undergraduate career, he earned the O’Hara-Mackaman Endowment for fiction writing. His work can be found in journals such as Sky Island Journal and West Trade Review. He especially enjoys reading contemporary fiction and poetry with an eye for the postmodern, such as the works of Jennifer Eagan and David Mitchell.
All Posts
Republish This Story

With your help, we can do even more important stories like this one.
Support the MFP
PrevPreviousHow Mary Kay Contributed To Feminism—Even Though She Loathed Feminists
Next‘Shake the Trees’: Filmmaker Hopes Emmett Till Film Will Generate New EvidenceNext