Lladi Ambrocio-Garcia was one of hundreds of immigrants U.S. Immigration and Customs Enforcement arrested on Aug. 7, 2019, at seven locations in Mississippi, including at Koch Foods in Morton, Miss., where she had worked for about eight months as a chicken cutter. After ICE deported the 28-year-old, she illegally re-entered the country and was arrested again and has now been detained for over eight months. She has suffered from COVID-19 and kidney infections while in custody.

Now U.S. Rep. Bennie Thompson is calling for her release. The Mississippi Democrat, who represents the 2nd District, wrote to ICE Acting Director Tae D. Johnson last month to ask the federal agency to consider freeing Ambrocio-Garcia from the Georgia facility where she is locked up.

“I write to request U.S. Immigration and Customs Enforcement (ICE) give all due consideration to Ms. Lladi Ambrocio-Garcia’s request for release from ICE detention as she awaits a final decision on her immigration case,” Thompson wrote.

On April 13, 2022, the Mississippi Free Press reported on a press conference that the Immigrant Alliance for Justice and Equity and National Day Laborer Organizing Network held that Monday in front of Rep. Thompson’s Jackson, Miss., office. The immigrant-rights advocates asked that Thompson intervene to get Ambrocio-Garcia freed from ICE detention since he is the House Committee on Homeland Security chairman. The Department of Homeland Security oversees ICE.

In a phone call to the Mississippi Free Press, Thompson later that day explained that he was looking into the request and followed that statement up with a letter to ICE the next day, April 14, 2022.

On April 29, 2022, advocates for Ambrocio-Garcia’s release gathered a second time at Thompson’s Jackson office on Medgar Evers Boulevard. IAJE Labor Rights organizer Miranda Bolef shared the event on Facebook Live and told the Mississippi Free Press over the phone on May 2, 2022, that organizers plan regular protests at the office until Lladi has her freedom.

“We were out there; we were standing in front of the office,” she told the Mississippi Free Press. “With our signs, we were showing that Lladi is still detained; this is still an injustice that’s happening right now.”

“It started out (with) me and three others, and then two others joined,” she explained. “We were making sure they knew that we are still there and we still mattered, that they couldn’t just forget about us, and that we’re going to be out there every Friday until Lladi is free.”

At the end of the event, the group went to the office and received a copy of Thompson’s letter sent to ICE two weeks earlier. “We were very pleased to see that they had reached out to ICE,” Bolef said.

Later that day, IAJE Executive Director Lorena Quiroz said the organization welcomed the letter. “As families across Mississippi continue to suffer the ongoing harm of ICE’s infamous raids, our local and national leaders must engage; silence is not an option,” she added.

“Rep. Bennie Thompson serves as Chair on the U.S. House Committee on Homeland Security, which provides oversight for ICE, and would have the responsibility to ensure DHS repairs the harms of ICE’s raids which DHS Secretary Alejandro Mayorkas has acknowledged were wrongful and retaliatory.”

The online appeal letter indicated that after Ambrocio-Garcia’s Aug. 7, 2019, arrest, she spent a year and 15 days in ICE’s migrant prison and twice suffered kidney infections that required emergency medical care. “She was deported to Guatemala in 2020, landing in very difficult circumstances of violence and financial need,” the letter that her sister Aura Ambrocio-Garcia signed read. “After making the journey back to the US to reunite with family and to escape danger in Guatemala, she has been arrested and kept in ICE detention for eight months.”

“In those eight months, Lladi suffered through contracting COVID and is reliving the trauma of her previous arrest and detention in Mississippi,” Aura continued. “Meanwhile, she faces serious threats on her life in Guatemala and is extremely afraid of returning.”

“Even if Secretary Mayorkas said they will do no more raids, what does that mean for Lladi? She should not be detained today!” she concluded.

In a phone interview with the Mississippi Free Press on May 2, 2022, IAJE Executive Director Quiroz said she wants more cooperation from Rep. Thompson.

“Definitely, the damage (from the 2019 raid) continues, and we were promised that this administration was going to undo the harm, and that’s why it’s so important that we follow up with a recommendation that representative Thompson really, really put efforts and intentionality in helping us free Lladi,” Quiroz explained. 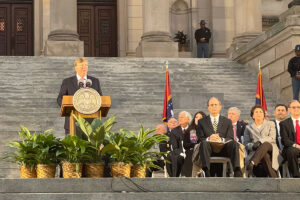 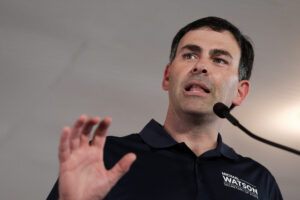 With your help, we can do even more important stories like this one.
Support the MFP
PrevPreviousCourt To Overturn Roe v. Wade in Mississippi Case, Leaked Dobbs Draft Says: Report
NextThe Love of Mississippi Women Restored Village COVID-19 BrokeNext