I Am a Yale Student. Often, I Wish I Was Home in Mississippi.

“I think I want to transfer from Yale.”

A hum replaced my mother’s vibrance on the other end of the phone.I waited a few seconds until her silence was too much.

“Mom, are you still there?”

I made the call in June 2020 from a corner stall at a Sonic Drive-In on the Mississippi Gulf Coast, where I was interning for the Sun Herald. Sonic was a safe space for me. Growing up in Amory, Miss., it could feel like all I had.

The Kansas City, Memphis and Birmingham Railroad founded Amory in 1887 in Monroe County—the geographic halfway point between Birmingham and Memphis, bordering Alabama. Although Amory experienced growth throughout the 20th century, the population began to fall in 2010, now under 7,000 people. The movie theater shut down. There is no bowling alley and no shopping mall full of department stores.

As high-school students, we made a community for fun. Friday-night football games meant dinner at Huddle House after. The staff would have to shut the doors because the number of teenagers was too much to handle. Fall nights brought bonfires. And when nothing special was happening, we went to Sonic and sat outside our cars, downing cheese sticks and talking about the same things we always talked about.“I’m here. I don’t understand,” Mom whispered back to me in 2020.

I am a first-generation college student. For most of my K-12 education, my expectations for college were high but not extraordinary. I would hopefully make good enough grades with a high enough ACT score to earn a full-ride to the University of Mississippi or Mississippi State. Otherwise, as my dad always reminded me, I would attend the local junior college first. After all, it’s free for high-school graduates in my county.

“You know your dad is going to say he was right,”  Mom continued.

I Decided I Wanted More

During sophomore year, I decided I wanted more. I wanted Harvard. Yale. Maybe Princeton. Honestly, I didn’t know the difference between the schools, but I thought they were for the wealthy and the to-be wealthy. An Ivy League education could be my way up the ladder.I enrolled in the Mississippi School of Math and Science, a free public boarding school 35 miles south of Amory in Columbus, at the beginning of my junior year. It was and is a place for Mississippi students to go if they are searching for an Ivy League future.

I stayed for two months. On a Thursday in October, I decided I was done being unhappy. The next day I packed all my things into my Ford Taurus and drove back to Amory. I was certain my Ivy League ambitions didn’t make it into my suitcases.

But I decided to try anyway. And in December 2019, I had my viral video moment, jumping around a classroom with my friends after opening my Yale acceptance letter.

I started my freshman year at Yale against the wishes of many in my community and family. And I struggled. Not with classes, but with finding my place in a new world of wealth, status and achievement. Then the pandemic sent us home in the spring, and I wasn’t sure I would return.“I know. I just don’t fit in there, I’m miserable,” I responded to my mother.

I thought it was just a “me” problem. The kid from rural Mississippi transplanted to Yale couldn’t fit in. Shocker. But the numbers are clear: Struggling with college is normal for many Mississippians, no matter their destination. In Education Week’s 2021 study on educational opportunities and performance, Mississippi ranked last in the nation in Adult and Post-Secondary education outcomes. It’s even worse for rural students in Mississippi, where the achievement gap between urban and rural students is larger than in most states in the country.

Logann Griffith graduated from Amory High School in 2019 and enrolled at Itawamba Community College before transferring to the University of Mississippi after graduating with her Associate of Arts degree. Her position on the softball team defined most of her high-school experience, providing her with friends and a social group. The transition to ICC was fairly painless for her, but acclimating to the University of Mississippi has been more challenging. 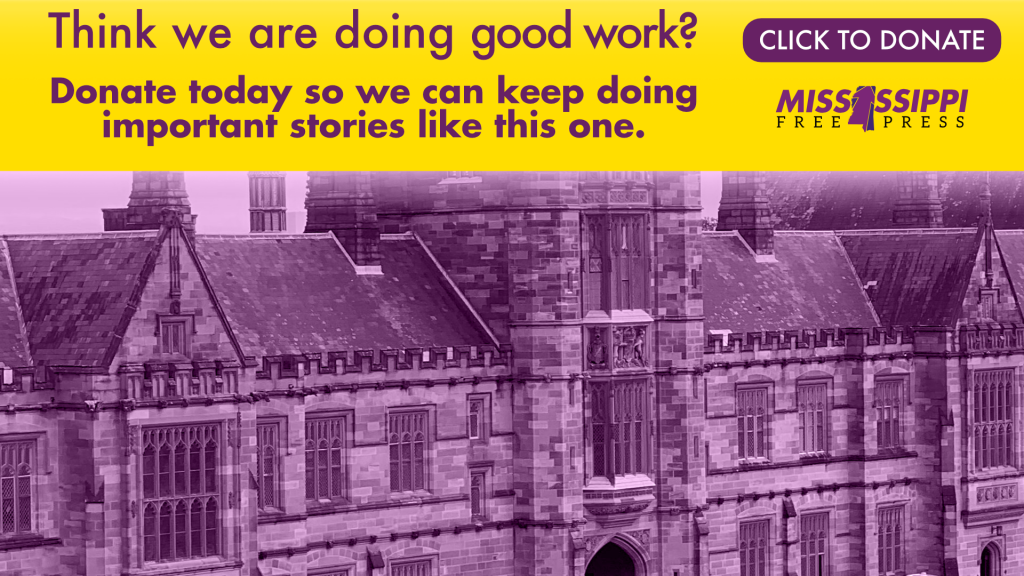 “It was comfortable because I knew at least one person in all of my classes,” Griffith said of ICC. “Ole Miss has been different. I have been on my own.”

Nevertheless, Griffith is making it work. She joined a sorority and shares an apartment with a friend from Amory. The transition of going from a rural high school to the local community college and then attending a university eased the growing pains of building a new life.

Sha’Nija Hughes, Griffith’s classmate, didn’t take the same path. She decided in sixth grade she would go straight to Mississippi State, but she didn’t feel like she had any institutional support to figure out how to get there. Instead, she and her mother worked through the process themselves, other than Hughes filling out the FASFA at school.

When Hughes got to campus, she quickly realized that the size of the university wasn’t for her.

“There were too many people,” Hughes said. “Every day I walked outside and saw a bunch of people I didn’t know.”

Hughes made friends easily in Amory. It was comfortable. Everyone lived near each other, and everyone grew up together.

None of Hughes’ friends from Amory went to Mississippi State, so she was starting from scratch. All the other students seemed too busy to spare time for finding new friends or, worse, they already had a network of people from back home.

She attended Mississippi State to become a teacher. But after a semester, she knew teaching wasn’t for her. Hughes says she lacked a qualified support structure to guide her in picking the right school and career for her.

“If someone had told me what it was like, I wouldn’t have gone,” Hughes said of Mississippi State.

Hughes transferred to ICC to join the phlebotomy program. She graduated in November and hopes to get a job as a traveling phlebotomist.

it is mandatory for all Mississippi high school seniors.

Griffith found the class beneficial. It gave her an hour each day to focus on her intended career: nursing. Primarily, it allowed her to read more about the demands and structure of nursing, which convinced her that she didn’t want to be a nurse after all.

Success Without a University Degree

Jake Williams, another graduate of the Amory High School class of 2019, knew that the classroom wasn’t where his biggest success would come. In middle school, he started buying and reselling small-margin goods like shoes. In ninth grade, he sold his first car. The teacher of the college and career readiness class, Coach Coty Cox, reaffirmed Williams’ belief that he could find success without a university degree.

“My mom always told me, ‘I’m a teacher. I want you to go to school,’ so I always planned on going for her,” Williams said, “Coach Cox had people in his family succeed without a four-year degree, and he opened my eyes to that.”

Williams graduated from ICC with an associate’s degree in business but didn’t continue to a four-year institution. To date, Williams has sold more than 70 cars and is also selling real estate. His savvy still doesn’t stop the questions, though.

“People see me and ask, ‘What happened to you?’ or ‘What are you doing?’,” Williams said, laughing.

As I thanked him for spending his evening talking to me about high school, he countered that our conversation wasn’t unusual. “I talk about the things we just talked about several times every week,” Williams told me. “I have spoken to tons of people.”

It would be simple to cut back to that phone call with my mom to wrap this all together. But I’m not going to do that because it doesn’t end exactly the way you might expect. Yes, my mom supported my decision. Yes, we drove eight hours to visit and tour a different university, but, no, I didn’t transfer there. I decided to return to Yale, against several of my sensibilities.

And everything has gotten a little better. I have found a crew of friends, gotten a new student job and joined a few new clubs. But it still isn’t easy being here. I lay on my floor and cried last week because I couldn’t figure out how to study for one of my classes.

Maybe that is where Mississippi rural education is: a few steps forward, a couple of steps back.

‘I Want to Make a Difference’

All the numbers, data points and trajectories make me wonder how we can measure educational success in Mississippi. So I asked what success meant to Griffith, Williams and Hughes:

Griffith: “Honestly, it doesn’t have to do with a successful job or money. Being a psychology major, I want to make a difference. Especially, I want to be a school psychologist. I didn’t have someone to go to at school. I didn’t feel comfortable, and I want to be that someone for a student. That’s when I would be like, ‘Oh, you succeeded in life.’”

Williams: “Success for me would be: If I passed away tomorrow, would I have accomplished what I was placed here to do? Success would also mean that my family would never have to worry about anything, if I was here today, tomorrow, or 20 years from now. Success for me is to live for today and never tomorrow. If you can accomplish something today that can benefit someone tomorrow, then that is success.”

Hughes: “For me, it would be being able to live comfortably. I don’t want to be rich because not all rich people are happy. I want to be comfortable to the point where I don’t have to ask anybody for anything I need.”

For me, success means finding out who I am and surrounding myself with people who love me for it. I haven’t found that measured in any dataset, and I am still working to find it here at Yale.

But I have found it in my life back home in rural Mississippi.

Lukas Flippo is a multimedia intern for the Mississippi Free Press for the summer of 2022 and an undergraduate student at Yale University from rural Mississippi. Previously, he was a Photo Editor for the Yale Daily News, Pulliam Fellow at the Indianapolis Star and Visuals Intern at the Sun Herald.
All Posts

With your help, we can do even more important stories like this one.
Support the MFP
PrevPreviousFirst Case of Omicron in Mississippi in Vaccinated Resident Who Visited New York
NextSen. Wicker: Don’t Rule Out Attacking Russia With Nukes, Ground TroopsNext