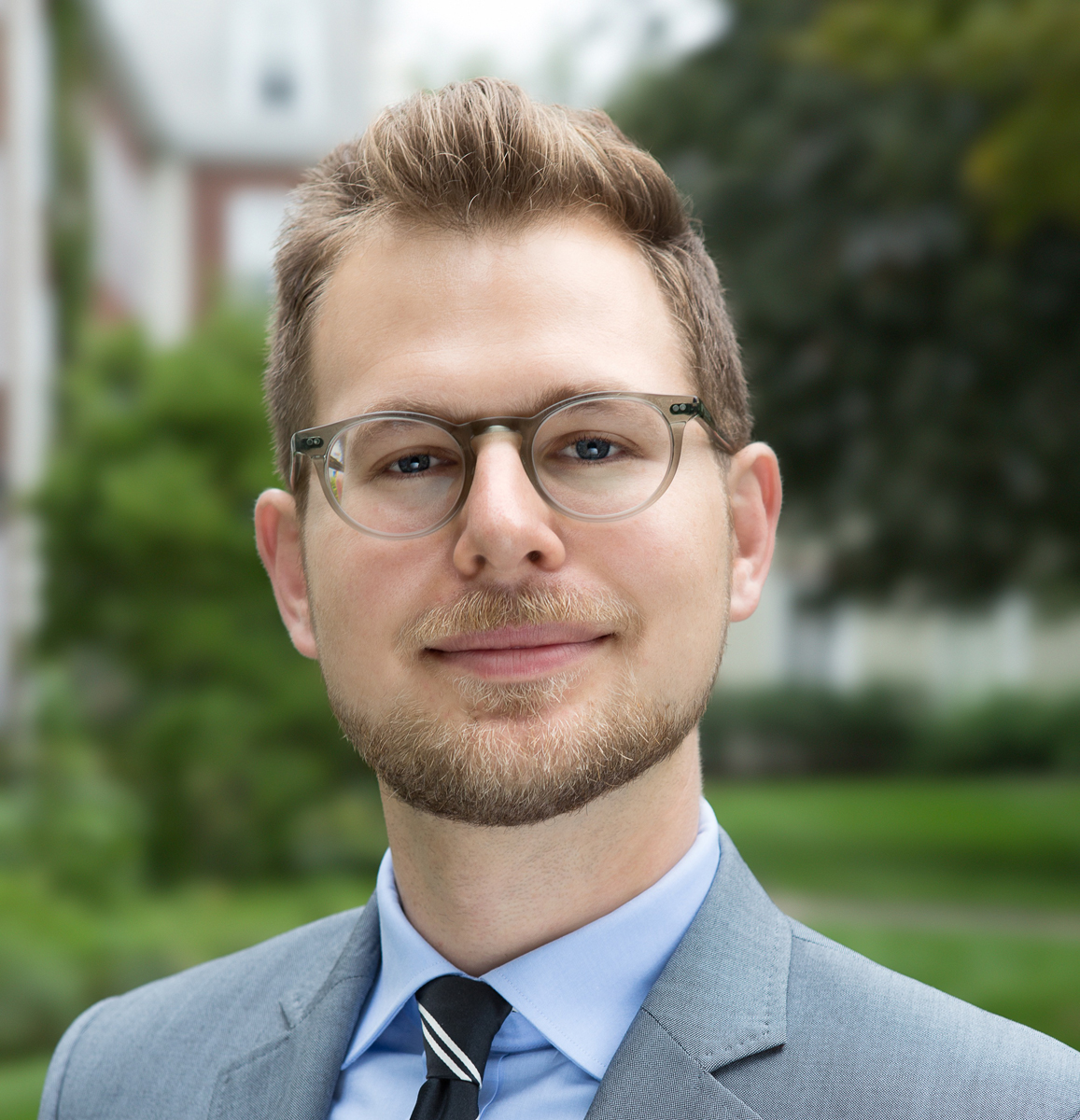 MacArthur Genius and MIT professor Linda Griffith has built an epic career as a scientist and inventor, including growing a human ear on a mouse. She now spends her days unpacking the biological mechanisms underlying endometriosis, a condition in which uterus-like tissue grows outside of the uterus. Endometriosis can be brutally painful, is regularly misdiagnosed and misunderstood, and has affected Griffith’s life along with the lives of over 6 million other women in the U.S.

Griffith’s research and inventions have the potential to improve women’s health dramatically. The problem for women is that she stands out for another reason: She’s female. In 2020, only 12.8% of U.S. inventors receiving patents were women, and historically male researchers have ignored conditions like endometriosis.

Male researchers have tended to downplay or even outright overlook the medical needs of women. The result is that innovation has focused mainly on what men choose to research. My colleagues John-Paul Ferguson, Sampsa Samila and I show in a newly published study that patented biomedical inventions in the U.S. created by women are 35% more likely to benefit women’s health than biomedical inventions created by men.

Bias By The Numbers

To determine which inventions are female-focused, male-focused or neutral, we analyzed the title, abstract and start of the summary text from 441,504 medical patents using the National Library of Medicine’s Medical Text Indexer. The indexer uses machine learning to categorize the subject of a text document, including whether it has a female or male focus.

Our data reveal that inventions by research teams that are primarily or completely composed of men are significantly more likely to focus on the medical needs of men. In 34 of the 35 years from 1976 to 2010, male-majority teams produced hundreds more inventions focused on the needs of men than those focused on the needs of women. These male inventors were more likely to generate patents that addressed topics like “erectile” or “prostate” than “menopause” or “cervix.” Male inventors also tended to target diseases and conditions like Parkinson’s and sleep apnea that disproportionately affect men. 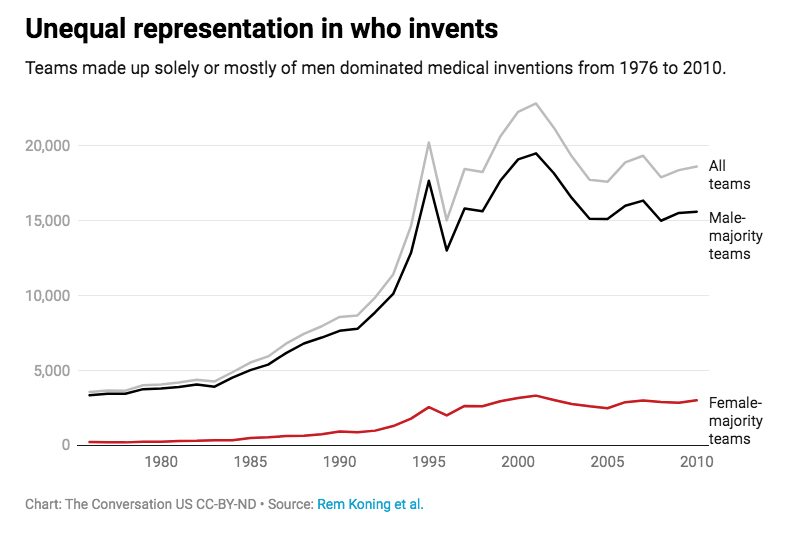 Conversely, inventions patented by research teams that are primarily or completely composed of women were more likely to be focused on the needs of women in all 35 years of our data. These patents are more likely to address conditions like breast cancer and postpartum preeclampsia and diseases that disproportionately affect women like fibromyalgia and lupus. However, in 1976 only 6.3% of patents were invented by teams with as many women as men. By 2010 that figure had risen to only 16.2%. As a result, while inventions by women were more likely to be female-focused, such patents were uncommon because so few inventors were women.

We found that across inventor teams of all gender mixes, biomedical invention from 1976 to 2010 focused more on the needs of men than women. Our calculations suggest that had male and female inventors been equally represented over this period, there would have been an additional 6,500 more female-focused inventions. In percentage terms, equal representation would have led to 12% more female-focused inventions.

Looking Out For Women’s Needs

There are also more subtle benefits when more women invent. Female inventors are more likely to identify how existing treatments for non-sex-specific diseases like heart attacks, diabetes and stroke can be improved and adapted for the needs of women. Indeed, women are more likely to test whether their ideas and inventions affect men and women differently: for example, if a drug has more adverse side effects in women than in men.

In our study, we found that even within narrow disease areas like atrial flutter, women are still more likely to see opportunities to target their inventions for the specific health needs of women. Our results suggest that increasing representation should address these invisible biases.

The growing number of female inventors is starting to close the gap. In three of the five years from 2006 to 2010, the U.S. granted more female- than male-focused patents. In fact, since 2010, there has been a boom in female-founded startups building new and disruptive women’s health products ranging from new types of period underwear to smart breast pumps.

No matter the underlying causes, the result is that while nearly 33% of published scientific discoveries were produced by majority-female research teams in 2010, only 16.2% of patents were invented by majority-female inventor teams in the same year. As with invention, we found that scientific discoveries by female scientists as measured by published research papers are 12% more likely to benefit women than discoveries by men. At least in the short term, helping female scientists commercialize their current research should boost the number of female inventors and the number of female-focused inventions.

More generally, our findings highlight how demographic inequities in who gets to invent lead to demographic inequities in who benefits from invention. Recent work shows how increasing the number of Black physicians benefits Black patients, and more generally the benefits of matching minority patients with minority physicians. This suggests the world doesn’t just need more inventors like MIT’s Griffith, but also more inventors like Dr. Patricia Bath, the first Black woman to receive a U.S. medical patent. Bath’s invention, a laser treatment to remove cataracts, was inspired by her observation that Black Americans were twice as likely as white Americans to suffer from blindness.

Rem Koning is an Assistant Professor of Business Administration in the Strategy Unit at Harvard Business School. Professor Koning studies how managers and entrepreneurs discover new ways to create value. His work explores how bias in how we discover hinders firm performance, leads managers to overlook promising new practices and talent, and drives inequities in who benefits from innovation and competition. He teaches strategy and entrepreneurship to executives and MBA students. His work has been published in the Strategic Management Journal, Science, Organization Science, Management Science, Research Policy, the Papers & Proceedings of the American Economic Association, the Journal of Organizational Design, and the American Sociological Review. It has been covered by the Wall Street Journal, Vox, the New York Times, and Forbes. Professor Koning earned his Ph. D. at the Stanford Graduate School of Business.
All Posts

With your help, we can do even more important stories like this one.
Support the MFP
PrevPreviousAtheists Sue Mississippi For ‘In God We Trust’ Plates: ‘I Don’t Want Jesus Riding On My Car’
Next‘Fresh Air Smells Sweeter Without Masks’: Jill Biden Visits Jackson To Urge VaccinationsNext